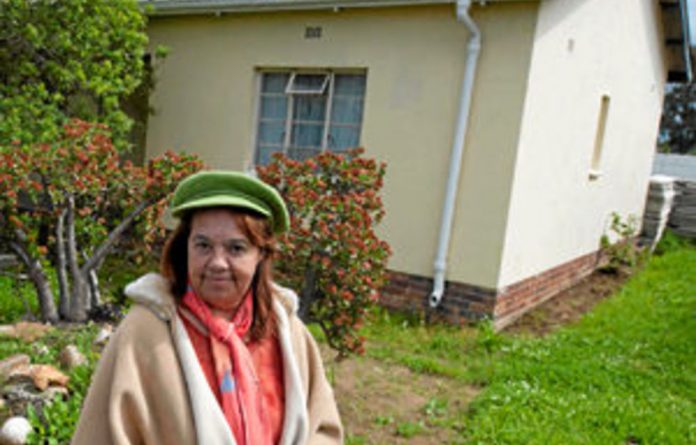 Joan Poole recalls with clarity the traumatic moment more than 40 years ago when she heard her family would have to move from their home in Somerset West because it was being declared a “whites-only” area.

“I was heartsore. I couldn’t believe this was happening to us. My family’s home was very close to my place of work,” said Poole. “We didn’t know where we were going to go.” Poole’s family was forced to move to Helderzicht, which was a suburb on the outskirts of Somerset West, declared a coloured area.

Just as her family was feeling settled, the National Party and municipal authorities tried to move the entire community again because it was felt they were too close to the “whites-only” area of Paardevlei. Discussion about building a new road between the two suburbs was held but it never happened. Meanwhile, the displaced families finally put down roots.

Today there is nothing luxurious about Helderzicht, but for 68-year-old Poole and the rest of the community, it is home. Here neighbours chat over low garden fences, everybody waves at one another and vegetables and lavender thrive in the sunlight. The feeling of a strong community spirit in Helderzicht is enviable. You don’t see burglar bars on the windows because there is little crime in the suburb and residents proudly describe themselves as “one happy family”.

But Poole’s suffering under the notorious Group Areas Act came back to haunt her two years ago when she was told she would be forced to move again from the place she calls home. This time it was to make way for a toll road.

The harmonious life of the community was threatened in April 2009 when 12 families living as tenants in the area were served with eviction notices by Sanral (the South African National Road Agency) as a N2 toll road was going to be built through the suburb. The toll road was set to run in front of the gate of Danie Ackermann primary school, which caused an outcry in the community.

Residents who had rented homes or land in the area for more than 30 years woke up to find drilling machines outside in the road. The ground shook around them as the drills bore into the ground and they were informed by workers that their houses were shortly to be demolished.

Fighting back
Outraged homeowners and tenants fought back, reviled by attempts to move some of the residents forcibly again. Earlier this month they won their case, with the help of attorney Albert Tappenden and advocate Norman Arendse, the former president of Cricket South Africa, who represented the families pro bono. “We have been worried every day they will come and move us,” said Poole. “You can’t imagine how emotional we were when we learned we had won our case.”

Magistrate Wayne Lawrence of the Somerset West Magistrate’s Court found that it was not “just and equitable” to grant an eviction order to Sanral. Everybody in the community pulled together. Hennie Patience, the chairperson of the N2/T2 (trunk road) crisis committee, is a homeowner but he stood alongside the tenants who faced eviction.

“Our victory restores the dignity of our community,” he said. “Justice has been done. We hope it will bring some healing.”

Ebbie Sedgewick, the secretary of the crisis committee, has kept a library of notes and newspaper clippings detailing the ordeal the families have been through over the years. He talks us through the history of the area and when he is done, plates of assorted home-baked cakes, samoosas and pies arrive hot from the oven.

“There is heartache that a member of our community, Helen Isaacs, died of cancer during the court case and she did not get to see the victory,” said Sedgewick. “At least we have some of our dignity back.”

One of those who was about to be evicted is Amber de Wet, who recently lost her house in a fire caused by an electrical fault. The community helped her build another home. “I’m moving back in next week,” she said happily. “This house is even better than my old one, which I built with my own bare hands.” Sanral’s attorney, Fiona Bester, said this week it might be an option to appeal against the judgment.

“We have requested reasons from the magistrate for his decision, which is a precursor to an appeal,” she said. “As soon as we receive reasons, probably before the end of the week, we will make our decision.”

Tappenden is hoping Sanral will wake up to the fact that these residents have nowhere else to go and leave them in peace. In papers filed in court, it was stated that the residents would be left “homeless, destitute and vulnerable to the violation of other human rights”.

“It is common cause in this matter that all the respondents were subjected to forced removal under apartheid during the 1960s and it is not out of choice that they ended up occupying the houses in question in Helderzicht,” court papers emphasised. Given the undisputed evidence of the individual respondents that none of them can afford alternative accommodation should they be evicted, the “callous approach” adopted by Sanral was “nothing short of astonishing”, it was alleged in court papers.

The cricket connection
Arendse remembers Helderzicht resident Edwin Smith as a dynamite off-spin bowler in his day. The pair played against each other in club matches when Arendse was still in his teens. Arendse was a top-order batsman and also an off-spin bowler for the St Athens club in Athlone while the more senior Smith added weight to the Helderberg cricket club.

Smith was much admired for his play, said Arendse, even though he had the disability of having one leg shorter than the other and had to wear a built up shoe on the pitch “Etta had these huge paws and really gave the ball a rip,” said Arendse. “It was a great outing for us. We would travel from Athlone to Somerset West for the day. We never left early because we always had to stay for a braai in Helderzicht. Those people are the salt of the Earth and so hospitable.”

When the now 72-year-old Smith called Arendse for help when he and the other families renting homes were given eviction notices by the Sanral, the 52-year-old Arendse did not hesitate to leap in without charge.

Now a top advocate, Arendse roped in attorney Albert “Tappie” Tappenden to help fight for the community, who describe themselves as the “little fish”. “We are very pleased with the outcome,” said Arendse. “Both Tappie and myself picked up a bit of weight along the way because the community’s way of saying thank you is to bake us delicious food.”