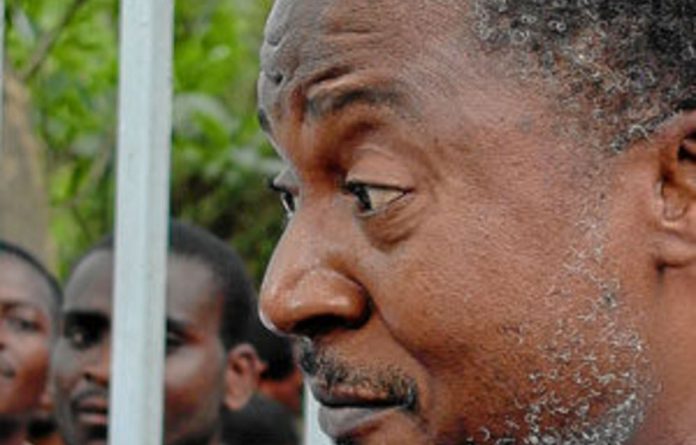 Dramatic accounts of a 2006 plan to assassinate Malawian President, Bingu wa Mutharika have emerged in affidavits from two men who blew the whistle on the alleged plot.

The affidavits, which have been obtained by the Mail & Guardian, show the background to the case in which the government is prosecuting Malawi businessman Yusuf Matumula and former vice-president Cassim Chilumpha on charges of treason and conspiracy to murder.

Both whistle-blowers — Thomas Elias Ndlovu, a Malawian living in South Africa, and Graham Minnaar, a former South African intelligence operative — are witnesses for the prosecution, which is expected to get under way later this year.

Chilumpha, through Matumula, is alleged to have hired Ndlovu and Minnaar to carry out the murder but, according to the account that emerges from their affidavits, they immediately alerted the Malawi authorities and then played along with the plot to gather more evidence against the alleged conspirators.

Chilumpha and Matumula have pleaded not guilty to the charges.

Ndlovu, who runs a Johannesburg security company, describes in his affidavit how he first met Matumula in Malawi in 2005. Then he explains how, in early January 2006, Matumula called him on his South African cellphone: “He asked me if I know someone who can steal something for us. Then he said he will see me when he is in South Africa.”

Not long after this call Matumula phoned Ndlovu again and summoned him to “room number 325” in the Don Suite Hotel in Isando. The hotel is close to OR Tambo International Airport in Johannesburg.

According to the statement the two discussed “business in general” before Matumula came to the point: “… if I know someone who can kill a minister in Malawi. I told him that I cannot give an answer immediately but I must consult the people I know first because they do not stay around Johannesburg.

“He [Matumula] came back to South Africa and I met him on January 12 2006 in the same hotel, same room. Before I gave him feedback, he said to me we must have a firm intention that we want to do this thing of killing [sic].

“He further said he has discussed this matter with some learned Muslims and they told him to stop doing it as it is not allowed in Islam. He further said he looked at them like stupid people who do not know anything. People are suffering in Malawi and something must be done.”

Ndlovu claims to have suggested that he knew a “white guy” based in Durban “who works with Zulu people who can do this work”.

“I thought to tell him this because I was afraid that if I do not stop him in a right way then I will not be able to stop him to kill whoever he wanted to kill [sic].”

It was then, Ndlovu claims, that he was told that the target of the assassination attempt was Mutharika.

“When I heard this, I told him that this is a big job. I have to go and meet the killers in person. He was happy to hear this.”

Ndlovu says Matumula claimed credit for the plan to kill Mutharika and that Chilumpha “approved his thoughts and encouraged him to go ahead”.

Contradicting the suggestion that the assassination attempt was intended to alleviate the “suffering” of Malawian people, Ndlovu says: “[Matumula’s] main reason to kill the president was to get Chilumpha in power so that he can be getting a lot of business from the government.”

When contacted by the M&G Ndlovu said: “I will not comment on that. Thank you.”

The M&G‘s copy of the Ndlovu affidavit is poor and the signature is obscured. However, further evidence is contained in a detailed account by Minnaar.

In two handwritten affidavits, dated March and April 2006, Minnaar describes how he became embroiled in the affair — and later made covert recordings of the alleged conspirators.

“On the 25th January 2006 I met a former agent of mine named Thomas Ndlovu. I have known and worked with this man for over 12 years. I was Ndlovu’s handler while employed at the South African Secret Service.”

Minnaar’s status as a former member of the secret service emerged at the Ginwala inquiry into the fitness for office of former national prosecutions chief Vusi Pikoli.

It came to light that he had accompanied Malawi’s chief prosecutor to a meeting with the South African authorities to seek official help in gathering evidence against Chilumpha. He has consistently refused to talk to the M&G.

In the affidavit Minnaar states: “Thomas informed me that he had met with the vice-president of Malawi, Dr Cassim Chilumpha, at his Mudi residence on January 20 2006. At this meeting the vice-president had personally requested Thomas to arrange the assassination of Malawi President Bingu —”

He says Chilumpha had suggested to Ndlovu that he arrange for the president to be killed by poisoning him.

“Chilumpha referred to a scene in a movie in which someone was killed after being pricked by a poisoned dart on the end of an umbrella — He mentioned that the people who do this for him will be richly rewarded once he is able to take office as head of state of Malawi.

“Thomas was introduced to Chilumpha by a close personal confidant and business partner of the vice-president, Alex Matumula.”

Minnaar alleges that at the meeting on January 20 it was agreed that Ndlovu would need some funds upfront to conduct the planning and reconnaissance. He wanted currency amounting to $100 000.

Minnaar says Ndlovu told him he never had any intention of assisting Chilumpha in his plans to kill the president: he just wanted to obtain intelligence and evidence to pass on.

According to Minnaar, Ndlovu was experienced in infiltrating criminal and terrorist groups and would automatically have recognised the importance of staying close to Chilumpha.

In early February 2006 Mutharika sacked Chilumpha, accusing him of conspiracy to topple the government, but according to Minnaar this only sharpened the resolve of the plotters.

He says he instructed Ndlovu to set up a meeting with Chilumpha so that Minnaar, posing as the head of a team that would carry out the assassination, could satisfy himself that Ndlovu’s information was accurate.

A preliminary meeting was held with Matumula on March 6 2006.

Minnaar writes: “Chilumpha has directed Matumula to indicate that it is no longer necessary to have the president poisoned, but instead the climate is right to have him shot.

The affidavit indicates that the reward for the “hired assassins” would be lucrative business contracts and tenders, which would easily exceed $3-million in the first year Chilumpha’s ascension to power.

According to Malawian laws the vice-president automatically takes over power once the office of the president is left vacant through death, incapacity or impeachment.

The affidavit also notes that Matumula regarded his financial backing of the plot as a factor “protecting his investment in Chilumpha”.

In his later affidavit, dated April 6 2006, Minnaar explains how he had managed to arrange a meeting with Mutharika in which he had alerted the president to the assassination plan and offered his assistance in exposing the alleged plotters.

As part of this sting operation he travelled to Malawi on April 5 to meet with Chilumpha.

Minnaar states: “I have met Alex Matumula at Mount Soche Hotel Blantyre — At approximately 4.50pm we left — and drove in Alex’s Toyota Landcruiser to Mudi House, the official residence of Vice-President Chilumpha —

“I had arranged two recording devices which I concealed on my person to make recordings of Vice-President Chilumpha. The primary device was concealed in my belt and I only activated this device just prior to departing —

“At my personal meeting with Vice-President Chilumpha yesterday he gave me his personal assurance that I will be properly rewarded and looked after once I have arranged the murder of President Mutharika.

“In fact, Chilumpha expressed his frustration that the plan to have President Mutharika killed was being stalled by unnecessary meetings and further discussions —

“The vice-president was attempting to talk in a very vague and non-descriptive manner, as the subject matter is naturally very sensitive and of a criminal nature. He does, however, very clearly incriminate himself during this discussion.”

Chilumpha was arrested at his home on April 28 2006 for alleged treason. Shortly afterwards Justice and Constitutional Affairs Minister Henry Phoya told reporters that there was evidence that Chilumpha, through Matumula, had engaged “a professional assassin”.

He said the trio — Chilumpha, Matumula and the white assassin — had “extensive discussions over this matter” and the meetings were recorded.

Phoya did not say who had done the recording but confirmed that he had listened to the tapes and said the “audio on the tapes is crystal clear”.

Chilumpha’s trial began on January 30 2007 but has had repeated delays.

Chilumpha ran in the May 2009 parliamentary election as an independent candidate and won his seat, although he was under house arrest at the time.

Ruling with one foot in the grave