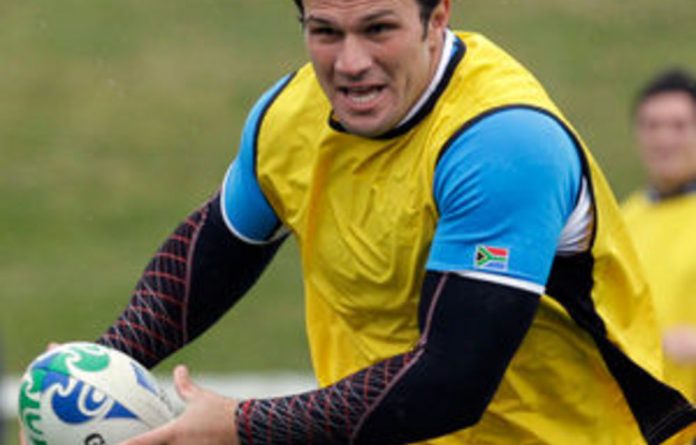 Springbok hooker Bismarck du Plessis said filling captain John Smit’s boots would be one of the goals he would like to achieve when South Africa take on Samoa in their final Pool D match on Friday.

“It wasn’t nice sitting out last week, but I’m just happy to get my chance this week, so I hope I can fill John’s boosts as he played really well and led from the front,” he said.

The Springboks are scheduled to announce their team on Tuesday, and Du Plessis said he had known his physical approach to the game would be at the team’s disposal.

The hooker was a prominent figure on the Springboks’ bench prior to last week’s match against Namibia, which he watched from the stands.

He said his contribution to the 17-16 victory against Wales in the team’s opening match proved that he thrived under pressure.

“Rugby is a contact sport and we won’t shy away from the contact and we are looking forward to the challenge Samoa will present.”

He said the importance of Friday’s match could not be overstated.

“No team has ever won the World Cup by losing a pool game, but we are definitely still going on an upward curve, which is good.”

Samoa secured a 27-7 victory over Fiji on the weekend.

Du Plessis said his team were expecting to face a similar performance from them.

“I think in the first game they played this year we saw they are very dangerous.

“Their back three especially are very dangerous with ball in hand. They are very structured and do things on their terms and I won’t say that I’m surprised by it because they have so many players in the premiership.”

“I thought their scrums were really superb on the weekend when they played against Fiji. They used the scrums as one of their main weapons and [we] are looking forward to that specific challenge.”

Over the weekend the Springboks enjoyed their first break since leaving South Africa on September 1, and according to Du Plessis, the rest has done wonders for the team.

“For us the last two days have been great. The guys got out of the hotel a little bit. We have been doing quite a bit of outdoor stuff. Yesterday [Sunday] we did some clay pigeon shooting and … went deer hunting on Saturday.

“So we have been quite busy, but yeah, it was very relaxing,” he said. – Sapa