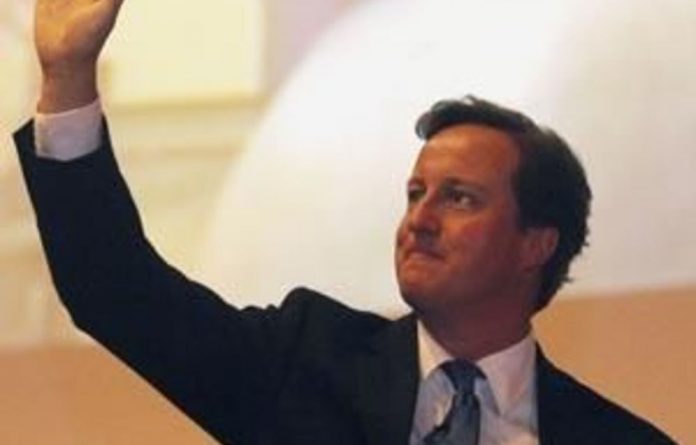 British Prime Minister David Cameron said on Sunday that the eurozone had to get on with fixing its financial problems or risk pulling down the entire world economy.

Speaking in Manchester, north west England before the start of his governing Conservative Party’s annual conference, Cameron said eurozone leaders must “roll up their sleeves” as they only had weeks to get it right.

“Frankly, right now the eurozone is a threat, not just to itself, but also a threat to the British economy … a threat to the worldwide economy and so we have to deal with this,” he told BBC television.

He added now was not the time for a British referendum on whether to stay in or leave the 27-member European Union (EU) — a subject which may be debated in the next session of parliament.

“Clearly there is a real problem in the eurozone and we’ve got to deal with that problem,” Cameron said.

“The British government has a very clear view, a view that we are pushing with partners in Europe, with the International Monetary Fund (IMF), with others about what needs to be done,” he said.

“Strengthening the financial mechanisms in Europe, greater involvement for the IMF, facing up to the debts and the problems and dealing with them decisively: This is what needs to happen.”

Cameron, who is staunchly against joining the euro currency, said it would be “very bad” for Britain if the eurozone broke up, given that 40 percent of British exports went to those 17 countries.

However, “Action needs to be taken in the coming weeks to strengthen Europe’s banks, to build the defences that the eurozone has, to deal with the problem of debt decisively.

He said he suspected the eurozone might go down the path of much closer economic coordination in the future.

Holding a referendum on EU membership is likely to come up for a one-day debate in parliament before year-end, after a petition on a government website reached the required 100 000 signatures.

The Commons Business Committee is likely to set a date soon.

Its chairperson Natascha Engel told The Mail on Sunday newspaper, “Given the crisis in the eurozone this issue has become more relevant than ever.

“The EU today is completely different from the one the British people voted to join in 1975. It is time to examine the position again.”

However, Cameron said he would not support such a referendum.

“It’s not our view that there should be an in/out referendum. I don’t want Britain to leave the EU,” he said.

“What most people want in this country is not actually to leave the EU but to reform the EU and make sure that the balance of powers between a country like Britain and Europe is better.” — AFP

Just over a year ago, veteran radio presenter Xolani Gwala’s cancer was in remission. He spoke to the Mail & Guardian once he was back on air.
Read more
Politics

In his run for the post of party leader, John Steenhuisen says he will respect any outcome.
Read more
Multimedia