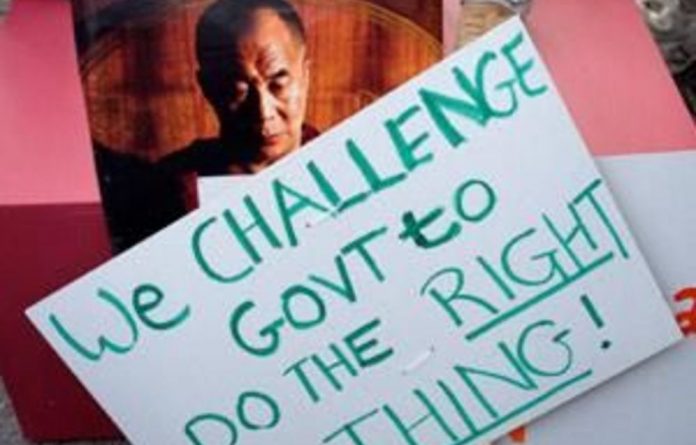 The Dalai Lama has cancelled a proposed trip to South Africa this week after authorities failed to grant him a visa in time, his office said on Tuesday.

Anti-apartheid leader Desmond Tutu had invited the Tibetan spiritual leader, a fellow Nobel Peace Prize winner, to give an inaugural peace lecture as part of celebrations for Tutu’s 80th birthday on Friday.

Civil and political leaders joined a vigil at Parliament, in what was ultimately a fruitless endeavour to pressure the state into granting the Dalai Lama a visa. We look at events leading up to the Tibetan spiritual leader’s decision to cancel his trip.

“His Holiness was to depart for South Africa on October 6 2011 but visas have not been granted yet,” said a statement from the Dalai Lama’s office in India, explaining the cancellation of the trip.

The government had come under fire from its ally Cosatu, as well as business and civil leaders, for refusing to say whether it would let the Dalai Lama into South Africa.

“Even though China is our biggest trading partner, we should not exchange our morality for dollars or yuan,” the trade union federation’s Western Cape leader Tony Ehrenreich told a candlelight vigil outside Parliament on Monday evening.

“It is completely inappropriate and discriminatory that the Dalai Lama should be denied access. Our democracy is founded on diversity, imperfect as it is.”

Ehrenreich said South Africans wanted to see the rights of the Tibetan spiritual leader respected and warned: “The government must not act against the will of the people because then you are no longer acting on our behalf.”

It would be “really not fair” if the Dalai Lama was denied a visa to South Africa to attend Archbishop Emeritus Desmond Tutu’s birthday party, businesswoman and academic Mamphela Ramphele said.

“Isn’t it ironic, that when he’s celebrating his 80th birthday, the most fundamental right — the right to association — is being taken away from him?” Ramphele said on Monday evening at a candlelight vigil outside Parliament to put pressure on the government to grant the visa.

Ramphele was quoted on SABC radio news as saying that Tutu and the Dalai Lama were “not really a threat to anybody”.

“We cannot be blackmailed into defying our Constitution,” Zille said at the peaceful protest by around 200 people, some of them praying.

Earlier on Monday, a representative of the Dalai Lama said requests for information from the South African High Commission in India, where he lives in exile, had proved fruitless.

Tenzing said that high commission staff in New Delhi told his colleagues they were awaiting a decision from Pretoria “because it is a political decision” that must be made by International Relations Minister Maite Nkoana-Mashabane.

The Dalai Lama, 76, applied for a visa in August to allow him to attend the 80th birthday celebrations of his friend and fellow Nobel Peace laureate Archbishop Emeritus Desmond Tutu on Friday.

International relations spokesman Clayson Monyela would not comment on the application, except to say that any eventual decision would be communicated only to the Dalai Lama.

President Jacob Zuma said he had no hand the decision.

He told a business breakfast in Johannesburg: “I don’t know what will be the final thing. I don’t think that you can get a definite answer from me.”

The Dalai Lama visited South Africa on three occasions between 1996 and 2004, and met former presidents Nelson Mandela and Thabo Mbeki.

In 2009, he was refused entry by the Zuma administration to attend a conference of Nobel laureates. The government said the visit would detract from preparations for the 2010 Fifa World Cup.

The decision drew criticism from abroad and at home, with then public enterprises minister Barbara Hogan saying it showed the government was “dismissive of human rights”.

She was reprimanded and forced to apologise to her Cabinet colleagues.

Tutu termed the decision “disgraceful” and University of the Witwatersrand (Wits) vice chancellor and principal Loyiso Nongxa said it “ridicules the values enshrined in our Constitution”.

Wits has again invited the Dalai Lama to speak at the university and another outcry is expected if he is again denied entry into South Africa.

The Dalai Lama has lived in exile in India since fleeing Tibet during a failed uprising against Chinese rule in 1959.

He accepts Chinese rule and stepped down from political life earlier this year, but Beijing accuses him of being a “splittist” and discourages his meetings with foreign government leaders.

In July, China signalled its displeasure after United States President Barack Obama received the Dalai Lama at the White House.

As part of Tutu’s birthday celebrations from October 6 to 8, he was expected to deliver a speech titled “Peace and compassion as catalyst for change” to students.

Ramphele said after all Tutu had done for South Africa, “to prevent a lovely party of a set of old men is really not fair”.

“In foreign policy we must display strength, not weakness,” she added. — Sapa