Duduza residents picking up the pieces 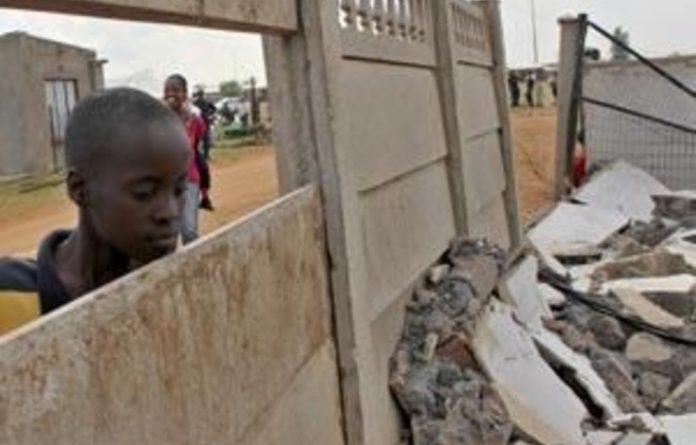 Kumbulani Lengolo (55) sits on a black sofa by the roadside in Duduza. It is 1pm on Monday. On any other day she would be at home, busy preparing lunch for herself and her son.

But she won’t be cooking anything today. Her house is just a heap of rubble, ripped apart by Sunday night’s tornado.

Like other Duduza residents, Lengolo is still in a state of shock.

“I have not come back to my senses yet,” she explains. “I have lost almost everything that I owned. I will have to start afresh, even if I don’t have any income.”

On Sunday evening, Lengolo was visiting her neighbour. As she closed her front door, she had no idea that she was saying goodbye to her house.

The storm started with wind and heavy rain. “Then I saw houses — including my own — going down,” she says, tearfully.

When the tornado subsided, not one brick of her home remained standing. She was able to rescue just her sofa, some pots and a fragment of a R100 note. It was the only money she had in the house.

Lengolo was luckier than some. At least she and her son were able to find shelter with her sister, Vaileth, who lives in a nearby township. Other residents spent the night in the open.

Sunday evening’s tornado changed the history of Duduza in a single hour. When the Mail & Guardian visited the area on Monday, it resembled a construction site. Some houses were in ruins. Others were half-destroyed, with cracked walls and gaping roofs. A few had not been touched by the tornado at all.

According to a Netcare 911 spokesperson, more than a thousand homes were destroyed. The storm also claimed the life of an eight-year-old boy and injured 160 people, who were taken to Pholosong Hospital.

On Monday, most residents were still in a daze. They looked like people who were wishing they could wake up, after a bad dream. Small children — oblivious to the disaster — played in the rubble, as their parents tried to recover what possessions they could.

Papers and clothing lay scattered around. Little comfort for those without a roof over their heads.

Eyewitness Vusi Collen was enjoying a final weekend beer outside his friend’s place when the tornado struck. “I saw something like a big, dark-grey cloud on the ground which was moving like a snake. Before I realised what was happening, I saw houses going down,” he said.

“It was like what I see in Hollywood movies.”

Collen’s house was not extensively damaged, although his girlfriend was among the injured. On Monday he was helping less-fortunate neighbours to pack up their few belongings, and take them to a community hall for safe-keeping.

Johannes Nonyana (26) was not at home when the tornado struck. He received a sudden phone call, urging him to “come back quickly” because there was a “problem”.

“I could not believe my eyes. Our house was down and we lost almost everything apart from a TV set and a DVD deck. I’m not sure if they are still working,” he said.

On Monday, Nonyana stood in a queue to receive a slice of bread and a cup of soup, donated by Shoprite. He had spent the night without shelter, along with his father and younger brother. Nonyana was not expecting to catch up on his sleep anytime soon.

“I am too stressed to even have a nap,” he said.

Several Duduza residents told M&G that RDP houses bore the brunt of the tornado’s force because they were not well-built.

“Look at the cement between the bricks. It’s too little. No wonder the walls fell down easily,” said Lebohang (31), who earns a living as a car-washer.

“In the 14 years that I’ve lived here, I have not seen such a storm,” he added. “It will take time to forget what I saw.”

By Monday evening, Lebohang and his neighbours were still waiting for a briefing from the council. Many residents said they felt hopeless. As the sky threatened more rain, they were wondering where they would spend the night. They were also worrying about their future.

“We don’t know when we are going to have homes again,” said Lengolo. “It’s like we are in the dark”.