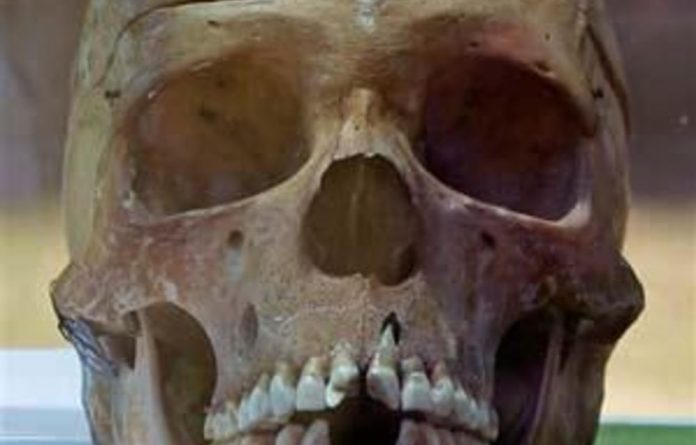 Human skulls taken from Namibia by German colonisers returned home after more than 100 years, but the reconciliatory gesture instead has ignited anger and renewed demands that Germany pay for its sins in this corner of Africa where more than 60 000 people were killed.

Tuesday’s return of 20 skulls taken to Germany more than a century ago for racist experiments also has fuelled anger about current injustices by a people decimated when they rebelled against German colonisers.

Historians say the genocide committed by German soldiers in what they called South West Africa was a precursor to the Nazi holocaust of the Jews.

The Herero people numbered more than 85 000 and were the most powerful and richest with herds of tens of thousands of cattle roaming a third of the country when Germany began its colonial adventure here.

When the Herero rose up, the slaughter began. Within three years, 85% were dead, their land and cattle stolen, some bodies beheaded.

Today, the Herero make up perhaps 10% of Namibia’s population of 2.1-million — and some still dispossessed of land are threatening to invade farms being worked by the descendants of the white settlers who seized it more than 100 years ago.

University professor Hoze Riruako, a senior adviser to the paramount chief of the Herero, warned that the tribe’s patience was running out.

“If something is not done, we cannot guarantee that you will not see the same kind of land grabs that you see in Zimbabwe,” where government-sanctioned violence has forced out most white farmers and a one-time food exporter has become dependent on food aid.

High on emotions
Passions ran high on Tuesday as people waited from 2am for the dawn arrival of a plane from Berlin. The skulls were welcomed to their ancestral homeland by warriors on horseback and teary-eyed women ululating in joy even amid their sorrow.

Tears poured down the cheeks of one wrinkle-faced Nama woman among hundreds in ceremonial dress — the Nama in white with gathered skirts, the Herero women in scarlet and emerald green Victorian robes topped by headdresses shaped like the horns of cows that are the traditional source of wealth. They sang hymns and praise songs.

“We are ready for battle! We are going to fight!” Herero warriors in military uniform chanted as a leader, chest covered in animal skins, led a cleansing ceremony watched by tribal chiefs in red and yellow hats.

Later, that traditional war cry was expressed differently by a young Herero man at Parliament Garden, where people processed past two of the skulls on display in glass cases in the shade of mauve jacaranda and flame-red flamboyant trees.

“We fought the Germans. We fought the Afrikaners,” said a young man, referring to white South African settlers. “We are not afraid to take on our own government.”

He spoke on condition of anonymity for fear of repercussions. He said he was 24 years old and has never had a job

“My family only has a small piece of land, too small to run all our cattle, and too small to share among all the sons. There’s no future for me,” he said.

Marginalised
Veneruru Korumbo, head of the Herero Youth League, said every second house in Herero areas has an unemployed young person. She blamed an education system in crisis and a government she accused of using international development aid to benefit the majority tribe, the Ovambo.

Her charges were echoed by Phil ya Nangoloh, head of Namibian Rights and Responsibilities human rights group.

“Areas that are populated by the Hereros are less developed, schools and hospitals are dilapidated, you have to cover long distances to reach them, and the roads are not tarred as they are in northern areas, where the government comes from,” he said.

Ya Nangoloh comes from the Ovambo tribe that makes up half the population, dominates the government and whose lands were never confiscated by the Germans.

“It’s not just the Hereros, but all other ethnic groups that are being marginalised,” he said.

Despite that, most successful black commercial farmers in Namibia are Herero, though their numbers are small. Most commercial farmland and the economy and industry remain in the hands of whites.

High inequalities
Ya Nangoloh noted that Namibia is not a poor country, with its diamonds, uranium and other minerals, beef and fish exports and tourism based on annual visits by 100 000 Germans. But he described “horrifically high” inequalities, with the poorest 20% of the population earning only 1.4% of national income, while the richest 20% enjoys nearly 80%.

Prime Minister Nahas Angula denied there was any discrimination, saying land and services are scarce for all Namibians. He said many people were overwrought by their emotions Tuesday: “This history is still fresh in the memory of many people and this is generating an understandable passion and anger.”

In his office overlooking Parliament Garden, where traditional chiefs were recounting their people’s tragic history, Angula gave a brief version to a reporter.

He said the Namibian skulls sent to Germany first were ordered around 1903 by Eugen Fischer, the Nazi anthropologist who believed he could prove that blacks were inferior to whites by measurements of their cranium.

To fill the order, German troops made the Herero dig up the graves of relatives and ancestors.

When the Hereros rebelled and killed more than 100 German troops, General Adrian Dietrich Lothar von Trotha issued his infamous order that “the Herero nation must now leave the country. If it refuses, I shall compel it to do so with the ‘long tube’ [cannon]. Any Herero found inside the German frontier, with or without a gun or cattle, will be executed. I shall spare neither women nor children.”

‘Colonial guilt’
German troops drove the Hereros into the desert, where they poisoned the wells. Stragglers were bayoneted to death or burned alive en masse on human pyres. Some escaped to modern-day South Africa and Botswana. Some were spared to serve as slave labour and sex slaves in concentration camps, where thousands more died.

Thousands of Namibia’s Demara and Nama people also were killed when they rebelled.

Yale University historian Benjamin Madley, in a dissertation titled From Africa to Auschwitz, argues that this mass murder of civilians, with impunity and in defiance of European martial codes, corroded German military morality and set the scene for even more extreme crimes by Hitler in Eastern Europe.

It was not until 2004, on the centenary of the German-Herero war, that Germany apologised, acknowledging “political and moral responsibility for the past and colonial guilt”.

But successive German governments have carefully refrained from admitting there was a genocide and refuse to pay reparations, pointing instead to generous development aid. Germany has announced development aid of €127-million ($188-million) for 2011-2012.

A Herero genocide lawsuit, filed in the US against the German government and German companies that benefited from slave labour and land confiscation, failed several years ago because of technicalities.

At the airport when the skulls arrived on Tuesday, Angula indicated it was time to move on, saying: “The Namibian nation accepts these mortal remains as a symbolic closure of a tragic chapter.”

That sentiment was not shared by the many Hereros who keep alive through oral history the tragedy of their nation and who still sing the war songs chanted by ancestors who fearlessly confronted German cannons with their spears, arrows and a few rifles. — Sapa-AP