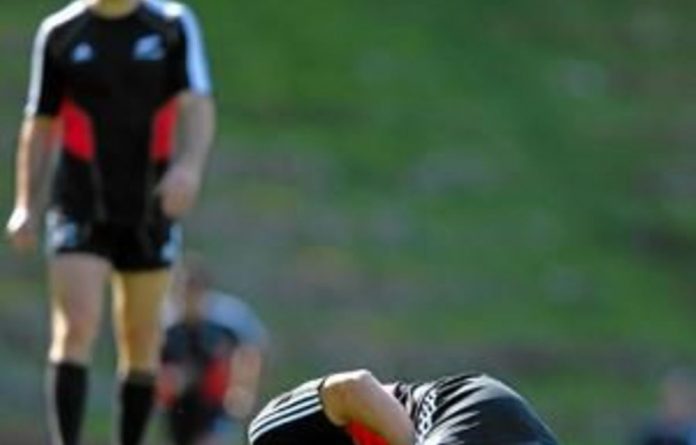 A week on from that dreadful moment, New Zealand remains in mourning. Dan Carter’s torn tendon still dominates the media and his image still stares down from billboards across the country, the baby face and doe eyes pleading for forgiveness. Carter’s image is used to sell everything from underpants to insurance, but with the knockout stages upon us, it can no longer be used to sell tickets. Indeed, the dreadful prospect of empty seats looms if the All Blacks fail to reach the final.

The loss of Carter makes that prospect more likely for, although no one expects Argentina to cause the biggest upset ever this weekend, few locals are sanguine about the prospects of the All Blacks beating either South Africa or Australia in the semi’s without the best flyhalf in the business at the helm. And in the departure lounge at Auckland airport on Sunday, it was possible to gauge the effect as the news spread from mouth to mouth: “Have you heard? Carter’s out.”

There was less space devoted in the media to the end of Frans Steyn’s World Cup. The shoulder injury that has sent Steyn home is unfortunate, but it will not affect the chances of the Springboks defending their title. It would have been nice to have a player who can kick 60 metre penalties and tackle like a loose forward, but he was not pivotal to his team’s chances in the way that Carter seemed to be.

The absence of Steyn will re­unite the best centre partnership the Springboks have ever had and entrench Patrick Lambie at fullback. Some time in the not too distant future Lambie may end up in Jean de Villiers’s number 12 jersey, with the gifted Elton Jantjies at flyhalf but, for now, the shape of the backline looks fine, even without Steyn.

It seems odd to report that the Boks are favourites to beat the Wallabies in Wellington this weekend, given that they lost twice in the Tri Nations just a few months ago. But there were mitigating circumstances in both those defeats and this Springbok team is in a much better space. There is also the spectre of Australia’s dreadful display in the 15-9 defeat to Ireland.

Perhaps mindful of that the Wallabies have rushed back Digby Ioane, the Reds centre, who has undergone successful surgery on a broken finger. This time last week Ioane was best man at his brother’s wedding in Brisbane, an unlikely way to prepare for a must-win game against South Africa.

The Boks continue to come in under the radar, unlike England and France, who meet in Auckland on Saturday. England’s Mike Tindall made a fool of himself in Queenstown a few weeks ago and the press just won’t let it go. Equally, French coach Marc Lievremont now seems persona non grata among his own players.

Two defeats in two weeks might suggest that they have no chance of progressing in this competition, were it not for England being so poor against Scotland. A late try by Chris Ashton saved England’s blushes but failed to camouflage the naked lack of ambition in the way the team played. They may be narrow favourites against France but it’s hard to believe that either will have a serious effect on the destination of the trophy.

Whichever side wins will have to beat another Six Nations team to reach the final. At the moment, that looks like being Wales, who have played with verve in every game bar the one against Samoa, where conditions proved an effective leveller. Just as the Boks know the Wallabies well, Wales will be under no illusion about the threat posed by Ireland in their quarterfinal in Wellington.

The Irish failed to make it beyond the pool stages in 2007 but beating Australia has opened up their side of the draw. If Brian O’Driscoll’s grizzled old soldiers have one more big performance in them, they may yet make it all the way to the final. Notwithstanding the above, the likely semifinal scenario will be South Africa vs New Zealand and England vs Wales.

You might think that in this rugby-mad country the World Cup would take centre stage for the entire duration, but last weekend’s action happened to coincide with the NFL final, the showpiece event of the Australian Rugby League.

It so happened that the Auckland Warriors, the only foreign-based team in the NFL, had made it through to play the manly Sea Eagles and that seemed all anyone was willing to talk about. Until this week, that is, when Irene van Dyk, a South African who captains the New Zealand netball side, played her 200th Test match. Rugby World Cup, what Rugby World Cup?

‘Saffa’ supporters drowned out by the Samoan hordes
There was a moment during South Africa’s final pool match with Samoa that encapsulated just how far away from home the Springboks were. Shortly after George Stowers drove over for a try early in the second half, the visiting Bok supporters were joined by the relocated “Saffas” who have made Auckland’s north shore their home in cries of “bokke, bokke!” Slowly, the gap between the cries was infiltrated by the word “Manu”, and in no time at all, it became “Bokke — MANU, Bokke — MANU!”

There was suddenly no doubt which team was playing at home and which away, for although Auckland has been adopted by the Saffas, it is really the true capital of Polynesia. That fact was underlined in the early hours of Monday morning, when police sirens finally called a halt to the wild street celebrations that began shortly after Tonga beat France.

These things don’t happen beyond the shores of New Zealand and it is something that the International Rugby Board is going to have to deal with sooner or later. The island nations have been given a second-tier competition to play in on an annual basis, but Samoa in particular believe they are better than that.

A few weeks ago there was a party in Auckland to celebrate 20 years since Samoa played in the 1991 World Cup. Scandalously, they were not among the invitees to the inaugural tournament in 1987, but they qualified for the next one and famously reached the quarterfinals by beating Wales at Cardiff Arms Park. They did it again in 1995 and faced South Africa in the quarterfinals at Ellis Park.

Playing on the loose head side of the scrum that day was Mike Mika. This week he recalled the intimidating effect of playing so far away from home. “It was actually my third time in South Africa that year,” he said. “I came out with Otago to play in the Super 10 and then the South African Rugby Union invited us to play a warm-up game against the Springboks ahead of the World Cup. “I remember walking down the tunnel and seeing this giant with a flat top haircut who looked like Drago out of Rocky 4. That was Kobus Wiese. We got flattened and we just couldn’t work out a way to stop Joost [van der Westhuizen].”

Mika is now a state prosecutor for the Southland District at the southern tip of the South Island. Like most New Zealanders he is appalled at the heavy-handed treatment meted out to Samoa centre Alesana Tuilagi for wearing a branded mouthguard. And he dreams of the day when the Springboks might play a Test match in Apia, the true capital of Samoa, instead of the surrogate city at the other end of New Zealand.