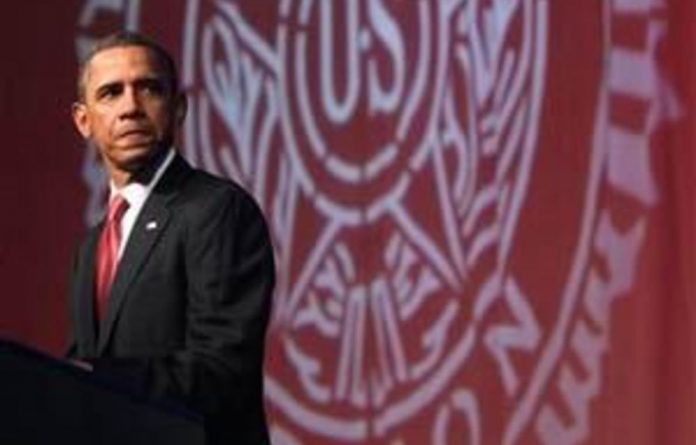 President Barack Obama on Saturday maintained his attack against congressional Republicans over his jobs bill, upping pressure before it faces a vote in the Senate next week.

Repeating a warning to make them explain to the American people why they oppose his measures, Obama, a Democrat, said the country needed it as insurance against a double dip recession.

“This jobs bill can help guard against another downturn here in America,” the president said in his weekly address.

Republicans, who complain Obama is more interested in keeping his own job in next year’s election than creating work for ordinary Americans, dismissed the steps as more of the same policies they say have missed their mark in the past.

“It’s nothing but a rehash of the same failed ideas he’s already tried, combined with a huge tax increase,” said Republican Senator John Thune in his party’s weekly address.

The president has toured the country since he launched the proposal last month in a bid to enlist public opinion to pressure Congress to pass the bill and he held a short notice press conference on Thursday to hammer home this message.

“If their plan doesn’t measure up, the American people deserve to know what it is that Republicans in Congress don’t like about this jobs plan,” Obama said.

Senate Democrats will vote on his $447-billion proposal for tax cuts and spending on Tuesday after replacing Obama’s suggestion of how to cover its cost with their own millionaire tax surcharge. However, the Senate is not expected to get enough votes to pave the way for the bill’s passage.

If it does fail to win the 60 votes needed to avoid Republican delaying tactics in the Senate, congressional Democrats will likely look at other ways to advance bits of Obama’s initiative, either through promoting individual bills or by attaching measures into other legislation.

Obama said action was needed and the latest monthly jobs data, released on Friday, bore him out.

It showed United States unemployment remained pinned at a historically lofty 9.1% last month — a rate of joblessness the president must reduce to improve his hopes of winning re-election in November 2012.

Trade pacts between the US and South Korea, Colombia and Panama that will be voted on by US lawmakers on Wednesday could generate business that Obama says may create tens of thousands of new US jobs.

He hosts South Korean President Lee Myung-bak to a White House state visit on Thursday and they will travel together to Detroit on Friday to discuss the job benefits of the pact.

But Republicans complain that he should have advanced these deals when he entered the White House two and a half years ago.

“It’s extremely unfortunate that we had to wait so long for the president to do something so simple, to help promote American exports, and create American jobs,” Thune said. — Reuters