Sirte hospital crammed with the dazed and the dead 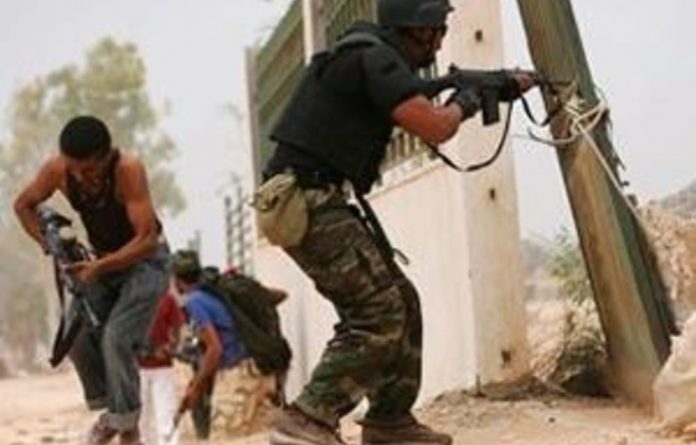 Triumphant fighters bearing Kalashnikovs marched up and down shouting “Allahu akbar” on Sunday as dazed and frightened patients in Sirte’s main hospital lay crammed into a ground floor corridor.

“It was a holocaust, not a hospital,” said Dr Nabil Lamine as he fought his way through the crowd.

Fighters for Libya’s new regime broke through to the hospital on the southern edge of ousted Libyan dictator’s Muammar Gaddafi’s hometown after days of shelling the surrounding area in their bid to capture the symbolic town.

Lamine headed upstairs to check on the only two patients left on the upper floors.

“We have to bring them all down because of the days of shelling” that preceded the capture of the Ibn Sina Hospital by National Transitional Council (NTC) fighters, he said.

He picked his way through shattered glass and turned right into the intensive care unit where two semi-naked men lay amid the stench of excrement in a room strewn with rubbish and broken medical equipment.

One needed brain surgery and the other had to have a leg amputated, said Lamine as artillery fire rocked the building from the fighting nearby as NTC forces tried to push Gaddafi loyalists back towards the city centre.

“We can’t help them. We don’t have the proper doctors. They may die,” said Lamine as he rushed back downstairs, leaving the men alone in the unit where a torn poster of Gaddafi lay on the filthy floor.

One of the two tried feebly to sit up before falling back again onto stinking bed sheets.

On the ground floor most of the patients in the corridor were frightened-looking young men, some with horrific burns to their faces.

‘Gaddafi men’
Three gun-toting fighters gathered around another young man, shouting at him and accusing him of being a Gaddafi loyalist. An older combatant tired to calm them down.

“Some are civilians but most of these are Gaddafi men,” said Hesham Ali Harba, an NTC fighter who said he was a doctor.

One young man in a bed next to him insisted he was a civilian and that his broken ankle was from a car accident.

“We took 50 prisoners. They were mostly mercenaries. They were lying in beds pretending to be wounded,” NTC field commander Osama Swehli Muttawa told Agence France-Presse.

“Some were wounded. We found Kalashnikov and other weapons under their beds.”

He pulled a hand grenade from a pocket and said, “I found this under one of their beds.”

At one end of the corridor is a courtyard that houses freezers where corpses are stored.

NTC fighters milled around amid the stench of death, pulling open the metal drawers to see if the bodies inside were those of fallen comrades in arms.

Bodies found
Muttawa confirmed they had found the bodies of missing NTC fighters.

“We found a lot of dead bodies of people we were looking for,” he said.

In the weeks before the hospital fell there were repeated reports that Gaddafi forces were using it as a command centre but there was no sign of such a centre on Sunday.

The archives room in the basement was instead full of Filipina, Indian and Bangladeshi nurses who had been working at the hospital and living in apartment blocks in the compound.

“Nobody went to work after October 2 because of the shelling. They were firing from five in the morning until it got dark,” said Maria Cristina Cruz from Manila, who has worked in Libya for 19 years.

“But some patients came to our building and asked us to come because they needed dialysis.”

The nurses were told by NTC fighters to wait in the basement with their suitcases until they could be taken to a field hospital 50km west of the city.

The NTC fighters said that they would also take the Ibn Sina patients there.

Of the handful of female patients, one woman had given birth by Caesarean section the day before. Her baby lay next to her in an incubator on Sunday — alive. — AFP