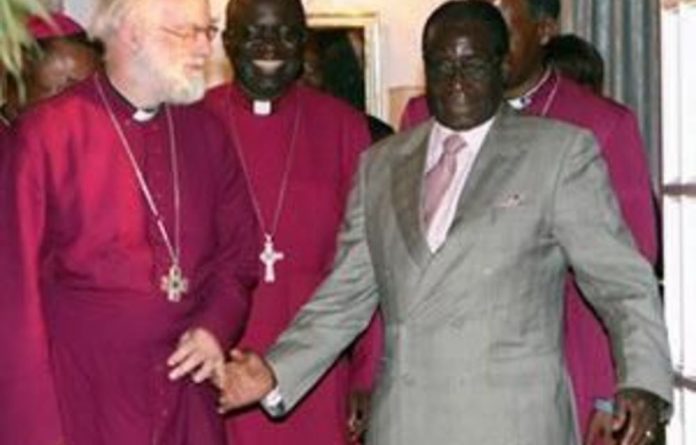 The head of the worldwide Anglican church on Monday met with Zimbabwe’s longtime ruler and criticised abuse and intimidation against his church’s worshippers in the southern African country.

The Archbishop of Canterbury, Rowan Williams, is paying a two-day visit to Zimbabwe. After the meeting, he said that President Robert Mugabe told him he was not familiar with the scale of the intimidation mentioned.

The Anglican Church in Zimbabwe has been divided since a breakaway bishop Nolbert Kunonga was excommunicated in 2007 for inciting violence in sermons supporting Mugabe’s party. But Kunonga says he left the Anglican church because of its position on same sex marriages.

Leaders of the global Anglican Communion have condemned gay relationships as a violation of Scripture. However, the Anglican Communion is loosely organised without one authoritative leader such as a pope, so some individual provinces have decided on their own that they should move toward accepting same-gender unions.

Mugabe is a bitter critic of homosexuality.

Williams said he presented the president with a “dossier” on the abuse and intimidation mainstream Anglicans are going through in the southern African nation.

Excommunicated leader Kunonga’s followers have seized the country’s main cathedral and bank accounts. His followers also have taken control of an orphanage, and evicted nuns and priests who do not recognise Kunonga.

The schism in the church has left mainstream Anglicans without places of worship and have experienced intimidation and alleged threats of violence.

He said he met Mugabe with the hope that he will “use his powers to guarantee the security” of mainstream Anglicans in Zimbabwe.

“He [Mugabe] expressed concern and said he will speak with Kunonga,” Williams said.” Anglicans must be allowed to carry out their mission in peace.”

Kunonga led demonstrations against Williams’ visit on Sunday, saying it is a “crusade for gays”.

Williams said Kunonga’s accusations are “fictitious” and a “distracting tactic to take people’s attention from the real problem.”

“The Anglican church doesn’t allow homosexuality, but places like the US and Canada have a more relaxed atmosphere. But we regard homosexuals as human beings deserving of love,” Williams said.

The Archbishop is now meeting with Zimbabwe’s Prime Minister Morgan Tsvangirai. He is then scheduled to leave for Zambia tomorrow. — Sapa-AP