Dozens killed in slew of attacks against Iraq police 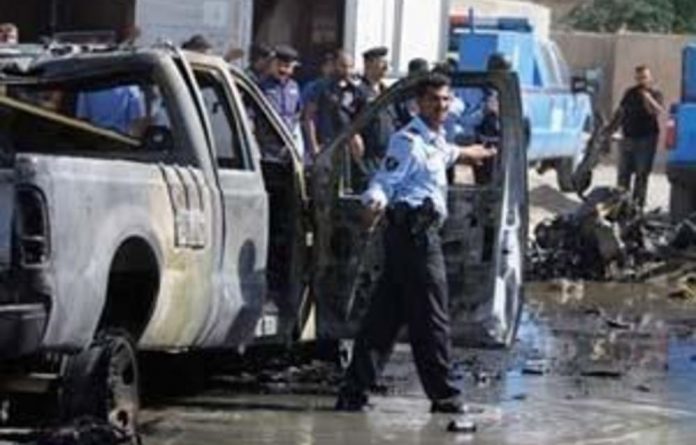 A slew of bombings targeted Iraqi police in Baghdad on Wednesday morning, including blasts by two suicide bombers who tried to ram their vehicles through police station gates. Iraqi officials said 25 people died and dozens more were wounded in the carnage.

The blasts were aimed at the police, generally considered to be the weakest section of the country’s security forces, and emphasised that despite Iraq’s security gains, long-term stability in the country is still elusive.

United States forces are scheduled to leave Iraq by the end of this year, and Wednesday’s multi-pronged attack is likely to add to concerns about whether the Iraqi security forces are able to effectively secure the city.

In the southern Karradah neighbourhood, 13 people died and 25 were wounded by a suicide car bomb attack on a police station, said Baghdad police officials. Smoke could be seen rising from the blast site as ambulances rushed to the scene, their sirens wailing. Iraqi army helicopters circled over head.

Officials said the suicide bombers both exploded their vehicles at the outer entrance leading into the police stations.

“The scene was horrific,” said Salim Ghadban, who was having breakfast near the Karradah police station when he heard a loud explosion.

“We saw terrified people, some injured, running in our direction, and we rushed to the attacked police station to see burned bodies and charred cars. We helped cover the burnt bodies until the ambulances arrived.”

The attack in Hurriyah was especially remarkable because the neighbourhood is a stronghold of Shi’ite cleric Muqtada al-Sadr. It is almost entirely surrounded by blast walls, and access is tightly restricted through just a four entrances manned by the Iraqi army.

A parked car bomb exploded in western Baghdad targeting a police patrol but killed one civilian and injured five people.

Three people were also injured by a roadside bomb hitting a police patrol in western Baghdad.

A hospital official confirmed the causalities. The officials all spoke on condition of anonymity because they were not authorised to speak to the media.

There was no immediate claim of responsibility but such attacks are usually the work of Sunni militant groups such as al-Qaeda in Iraq. They often target security forces in their attempt to destabilise the country and sow havoc.

The military spokesperson for Baghdad, Qassim al-Moussawi blamed al-Qaeda for the attacks and said they were an attempt to show people that the militants are still active.

“Every three months or so, al-Qaeda mobilises all its resources to launch such attacks in one day to say that al-Qaeda is still able to attack and threaten security posts,” he said.

The police are an especially vulnerable target among Iraq’s security forces because they usually do not have the heavy weapons or equipment that the Iraqi army has. The military has received the bulk of the US training assistance since the war began.

Under a 2008 security pact, all US forces are to leave the country by the end of this year, although a massive American diplomatic force will remain.

US and Iraqi officials have been discussing whether to have a longterm but small US military presence in the country after December in order to train Iraqi security forces. But they have been unable to agree on whether to give the troops the legal protections that the American government requires, and time is rapidly running out for any agreement to take place.

“We urge the security forces to be on high alert ahead of the US withdrawal. Security stability in Iraq seems to be far away because we are still facing challenges,” said al-Moussawi. — Sapa-AP

Kenya said it invaded Somalia to protect its citizens, but the attack in Nairobi this week shows this has failed
Read more
Advertising
Continue to the category
National