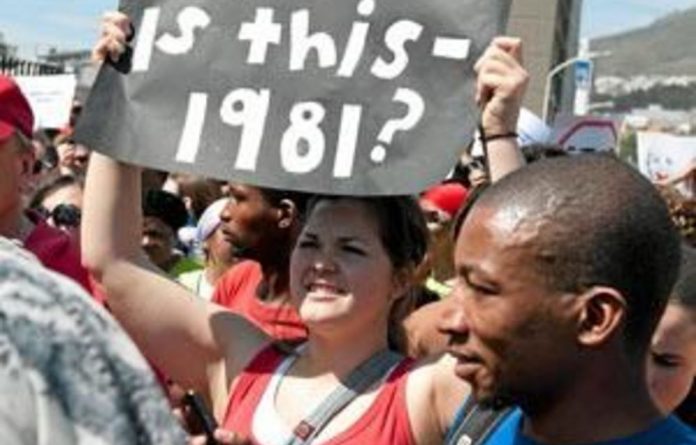 The ANC's move to start a public participation process on the Protection of State Information Bill (the "Secrecy Bill") must be welcomed. After all, this is what civil society demanded from the start. We argued that citizens needed as much access to information as possible and, in pursuit of that goal, we have staged protests for the past year. At the 11th hour the ANC halted the Bills progress through Parliament last month.

There isn't a problem — yet — with the idea of more public consultation. But it must be noted that in constituting a new committee to oversee a public participation process the ANC has chosen a party-political route. This raises questions about taking the process out of Parliament and away from opposition parties.

Disquietingly, there is no detail about the ANC's plans, although it has said it plans to forge ahead with consultation within a few weeks. We need to know when the process is going to start and how will it be done. Will people, more specifically only ANC members, maybe from branches, be bussed in to a rally, for instance? No form and content has been provided. How are communities themselves to be informed?

Some in the party have serious reservations about the freedom-limiting Bill, others do want it but concede there should be public participation. And then there are those, mostly associated with the intelligence-security establishment, who want to get the Bill through as soon as possible — some want it enacted before the end of the year.

The ANC has wrongly accused the Right2Know (R2K) campaign of being urban-centred, as well as being a "well-financed lobby group" without a community "voice". Hence, the plan to take the consultation process to rural areas and "the remotest of villages".

In fact, R2K was formed after more than 400 community-based and non-governmental organisations affiliated themselves. These include rural constituencies and unemployed peoples' movements. It has just launched an Eastern Cape wing. We would like to participate in the consultation process too.

The Secrecy Bill affects all citizens, as R2K's public meetings in poor and marginalised communities around the country have shown in the past year. R2K has much testimony from ordinary people trying to get information, showing how secrecy obstructs their lives.

We accept that a new public participation process is legitimate, but we need details. We need openness and transparency from the ANC. If this is supposed to be a public exercise, surely the public has to be brought on board. The answers to these questions will determine the ANC's level of good faith.