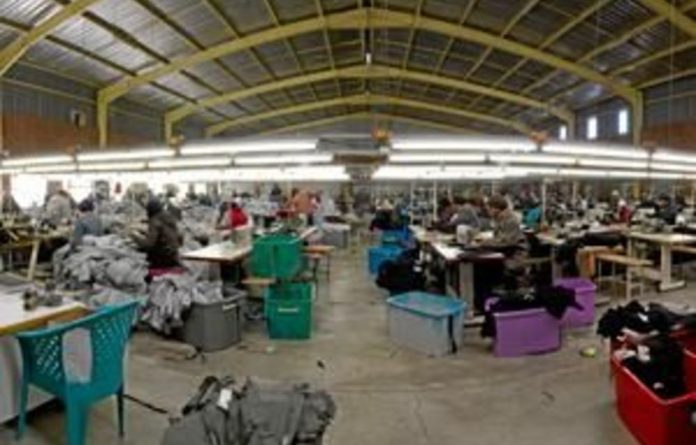 Every weekday at 6.15am, Zama Mkhize* catches a taxi from Madadeni township to a Chinese-owned clothing factory in Newcastle, where she has worked since 2001. The 30-minute commute costs R20 a day and claims more than one third of her income. A single mom and the sole breadwinner in a family of six, Mkhize earns R320 a week as a machinist but considers herself lucky. New recruits take home R100 less.

Apart from poor pay, Mkhize and scores of the predominantly female employees in the textile industry are subjected to appalling working conditions, which have come under the spotlight following a raid on 12 Chinese-owned factories on September 29 to ensure compliance with labour laws and minimum wage rates. The joint crackdown by members of the police, departments of labour and home affairs, the National Bargaining Council and the South African Clothing and Textile Workers’ Union (Sactwu) confirmed that most workers were being paid much less than R489 — the minimum weekly wage stipulated by the council — and that their human and labour rights were being violated.

“Emergency exits [were] not demarcated, no electrical certificates were available for electrical installations and no soap or toilet paper were placed in toilets. In one instance it was found that only one toilet was shared by almost 60 male and female employees,” said Abey Rasepae, provincial control inspector of the KwaZulu-Natal department of labour.

Mkhize told the Mail & Guardian that her employer never provided toilet paper for the staff. “For years, we have been using off-cuts from the jerseys we sew to clean ourselves. We throw them in a bucket next to the toilet, which is emptied once every four days.”

Fikile Khumalo*, who works as a cutter at a Chinese-owned factory, told the M&G that workers were strip-searched at the end of their shifts to ensure they were not stealing goods.

“We have to open our bras and lower our underwear in front of all the other workers. When we have our periods, they make us take off our sanitary pads. They don’t care that there are men around or that they’re insulting my culture.”

Another employee told the M&G that workers who were injured in the factory were dumped outside the premises so that the owners were not held liable for the injury. “We phone the ambulance to fetch them. The boss asks us to leave them outside because he doesn’t want to be held responsible,” she said.

The raid also exposed the use of illegal immigrant labour and found that some employers failed to contribute towards the unemployment insurance fund, despite deducting the amount from workers’ pay.

Inexcusable practices
Sactwu’s national organising secretary, Chris Gina, condemned the practices, saying they were widespread across Newcastle’s clothing industry, most of which is Chinese-owned. “It is simply inexcusable. Places like Newcastle continue to practise the kinds of apartheid labour abuses which were prevalent in the 1970s and 1980s. But South Africa no longer sanctions those kinds of abuses; they are illegal. Employers need to adhere to the law,” Gina said.

Factory owners tell a different story, claiming they are being ­targeted by the union and that reports of human rights atrocities are exaggerated.

“We’re not monsters running sweatshops,” said Alex Liu, chair of the Chinese Chamber of Commerce and Industry. His clothing factory was one of the 12 that were raided last month. “My workers will vouch that they get paid the wage they agree to and that they have basic things like toilet paper and soap.”

The 12 factories have until the end of November to become compliant, failing which they could face a fine or prosecution, or risk being shut down.

“Our aim is to remedy the problems that were picked up in the raid. The toughest challenge we face is wages, and there’s no easy solution to that,” Liu said.

Since last year employers have contested the bargaining council’s minimum-wage rate, saying they could not afford to pay it due to high overhead costs and low profit margins. It is set to rise to R569 in 2012. The council gave them until March to pay 70% — R342 — of the legal minimum. But Sactwu said the majority of Newcastle employers had failed to honour even this amount.

“If we are forced to pay up, we are left with three options: retrench some workers to compensate for the higher wage bill, shut down and enter a new industry, or relocate our factories to another country with cheaper labour,” said Liu.

Factory owners want to negotiate their own wage rates linked to employees’ productivity levels, but the union is not budging.

“We acknowledge the investment that the Chinese have made into our economy, but there are laws that they must comply with. There is no alternative,” said Sactwu’s branch organiser in KwaZulu-Natal, Patrick Vundla.

Newcastle’s clothing industry has shrunk from 16 000 workers in 2000 to 7 000 today because of cost pressures. In a town with an unemployment rate of 60%, poor pay and poorer working conditions, people like Mkhize will take any opportunity they can get.