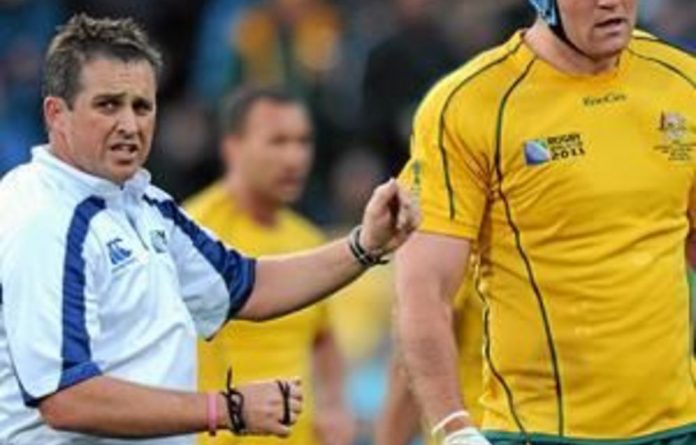 The ejection of the reigning champions notwithstanding, the World Cup continues. It was, however, instructive to look out over the Fan Zone on the Wellington Waterfront on Monday morning and note the difference that 24 hours had wrought.

On Sunday all had been hustle and bustle, with live music blaring from the specially constructed stage and Springbok and Wallaby supporters happily mingling in the bars alongside. On Monday morning the only sound was that of scaffolding being dismantled as Wellington packed up its month-long rugby festival and the action headed to Auckland, at the other end of the island.

Before lunch the Springboks were on the first leg of their journey home and the cruise ships that had docked next to the stadium had sailed with the morning tide. Among the passengers were many disbelieving Aussies, who had witnessed proof that it is possible to win a game of rugby without the ball.

In 1999 the Wallabies dumped the defending champion Springboks out of the tournament at the semifinal stage. That game needed extra time and there are those who will still tell you that the Boks of 1999 were better than those of 1995. Coach Nick Mallett kept his job, but was forced out during the following year’s Tri-Nations for a few ill-considered remarks.

Peter de Villiers has made something of a career out of ill-considered remarks, but the South African Rugby Union (Saru) chose to avoid the issue of whether he will retain his job by saying on Tuesday that it would assess all management posts in its formal review at the end of the year. Yet De Villiers was fairly unequivocal during the post-match press conference. Asked directly if the defeat to Australia marked the end of his time with the Springboks he replied, “I think so — the journey is over.”

He admitted before the tournament began that if he had his time again he would have blooded more young players over the past two years. If, as seems highly likely, De Villiers is replaced, his successor will inherit a team that has grown old together. Significant changes are inevitable, but if those changes had been made before Sunday’s 11-9 defeat it’s unlikely that the scenario would have changed.

In retrospect, and despite referee Bryce Lawrence’s laissez faire attitude, the game was won and lost when Heinrich Brussow left the field injured at the beginning of the second quarter. The much-anticipated battle between Brussow and David Pocock was ended then and the Springboks’ ability to support the ball carrier at the breakdowns went with it.

After the game there were no recriminations from captain John Smit and his coach, a fact that should be recorded, for it has not always been the case during De Villiers’s four years in charge. “This is not a funeral,” he reminded the gathered media with a smile.

Twenty-four hours earlier, England coach Martin Johnson had remained defiant amid calls for his resignation, following his side’s 19-12 defeat to France. “I’m not getting into that discussion now,” he said. “This is not the right place, not the right people and not the right time to be discussing it.”

Johnson was in denial. He said, “The performances have been fine: we reached the quarterfinals without losing a game and I think we made more scoring chances than [France] did today. This team will benefit from the experience.”

The fact is that the performances were not fine. If Felipe Contepomi had not been incapacitated early in the opening game, Argentina would have beaten England and avoided the need to play New Zealand in the quarterfinals. England were equally poor for 70 minutes against Scotland in the final match of pool play and came within an ace of not progressing to the knockout stage.

They fell finally to a French side that had mutinied. Coach Marc Lievremont remains at the tournament, but few are willing to believe that he has any control over his side any more. Is it possible that the mutineers can do it again and beat Wales to reach the final? It is not. This French side is not good enough, but this Welsh side could be the real deal.

The passage of play that led to the opening try by Shane Williams against Ireland may just be the best Wales have managed since the retirement of Gareth Edwards. A multi-phase move defended with gusto by Ireland was simply too good; it’s moments like these that give rugby union a good name.

Wales have been demonstrably the best of the Northern Hemisphere sides on view at this World Cup. It was neither fortune nor a rusty Springbok side that contributed to the nail-biting 17-16 result in Wellington and there should be no doubt that they can hold their own against any of the other remaining sides.

Remarkably enough, the same four nations that progressed to the semifinals in 1987 are there again, a quarter of a century after David Kirk became the first, and so far the only, All Black to lift the trophy. Yet it is entirely possible that Australia will end the All Blacks’ dream of a repeat on Sunday, for they are a far better side than the one that should have lost to South Africa last week. In 1987 Wales beat Australia in the bronze medal game.

In 2011 it might be New Zealand and France playing for that dubious privilege.

South Africa’s real World Cup Star
“There was more good rugby played in the game between Ireland and Wales than in the entire 2007 World Cup,” wrote one scribe after last weekend’s action. Several more suggested that the game between the Springboks and the Wallabies was held hostage by an incompetent Kiwi referee. The connection between the two statements is a South African referee.

Craig Joubert’s handling of the first of the quarterfinals in Wellington earned widespread acclaim and he is now in a straight dogfight with Ireland’s Alain Rolland to control next week’s final. The 33-year-old ex-pupil of Maritzburg College was masterful in the way he controlled a displaced Six Nations contest that could so easily have turned ugly, and it has been noted in the corridors of power.

A referee should never get in the way, which is why the game stops if the ball hits him. There were two examples of that dictum in the space of 24 hours last weekend at the Cake Tin. Joubert’s refereeing of the breakdown ensured that there was a flow to the game, while his strict interpretation of the offside line allowed the three quarters of both teams to express themselves.

By contrast, Bryce Lawrence seemed to be the chairman of the David Pocock appreciation society, allowing the Wallaby fetcher free rein to stifle Springbok ambition. Joubert was a spectator at the game and as crestfallen as the rest of the sizeable South African contingent, despite the fact that the ejection of the Springboks opened the door to a possible final for him.

The unthinkable had happened and a referee had influenced the outcome of the game. Among the many ironies is that there was a chap called Lawrence who should have been at the World Cup and wasn’t. Mark Lawrence, the ophthalmologist from Mpumalanga, announced his retirement shortly before the tournament began, having been snubbed by the organisers for the second time.