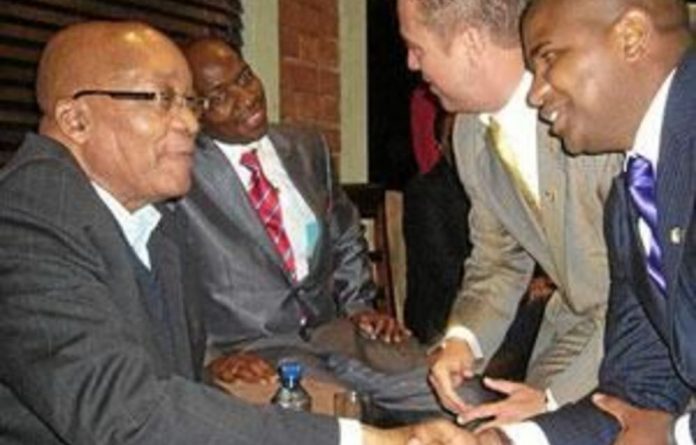 President Jacob Zuma, King Goodwill Zwelithini and the former national intelligence chief Billy Masetlha — these are the political heavyweights being courted by the man behind the controversial male circumcision device known as the Tara KLamp.

Ibrahim Sildky Yusuf, a Zambian national living in South Africa, is still wanted in his native country on a slew of criminal charges.

Despite Mail & Guardian exposés last year about Yusuf’s dodgy past, which included documented references to his association with drug trafficking in Zambia during the 1980s, his businesses continue to thrive in South Africa.

His company, Intratrek, holds exclusive distribution rights to the Tara KLamp, a questionable male circumcision device which the KwaZulu-Natal health department has procured for its mass campaign to prevent HIV transmission.

The Malaysian-manufactured device is not approved by the World Health Organisation and fared poorly in the only independent clinical trial in South Africa. The KwaZulu-Natal health department did not consider other devices and chose the Tara KLamp without issuing a tender.

Yusuf’s 24-year-old son, Tariq, is emerging as his father’s right-hand business partner. The social network-savvy youngster is fond of parading in designer clothes and posing for photos with beautiful women.

Yusuf and his son have also been cultivating members of South Africa’s political elite. The M&G has learned that:

Yusuf declined to comment about his connections this week but threatened to sue the M&G “internationally” for defaming the Tara KLamp.

He has previously denied all allegations of drug-related and other crimes in Zambia (see “Five allegations, all denied” below).

Tariq agreed to receive detailed written questions but did not respond to them.

Presidency spokesperson Zanele Mngadi had not answered questions at the time of going to press.

The health department said it had received no reports of medical complications arising from 13 116 circumcisions performed with the clamp to date.

A gift fit for a king

Last month the Sunday Times‘ isiZulu edition carried a front-page story revealing that Yusuf was the mystery donor of a R1-million Lexus SUV to Zwelithini. It quoted Yusuf as saying the gift was “a token of respect” which “comes from the bottom of my heart”.

Yusuf told the newspaper that he had never met the king before, contradicting royal spokesperson Prince Mbonisi Zulu’s claim that their relationship was “quite close”.

Zulu denied that the king had ever encouraged the use of the Tara KLamp, although he did claim that the male circumcision programme involving the device would have failed dismally without the king’s support.

But Zwelithini explicitly endorsed the Tara KLamp in a speech to the KwaZulu-Natal legislature on February 22. The New Age quoted him as saying: “I know there are critics of the Tara KLamp. When I made the announcement about circumcision, I mentioned that this should be practised in a hygienic manner. The Tara KLamp helps promote hygiene during the performance of circumcision. No one should die as a result of the Tara KLamp.”

Zulu referred the M&G‘s questions to a health department official, Sandile Tshabalala, as “a matter of protocol”. Tshabalala “works hand in hand with the king” in the male circumcision programme, Zulu said.

Tshabalala did not respond to questions.

Meanwhile, the man who introduced the Tara KLamp in South Africa, Tony Lawrence, claims he still holds the exclusive distribution agreement with its Malaysian patent holder until 2014. He said Yusuf “went behind our backs” to secure a parallel agreement.

Lawrence said he was considering his legal options. He claimed to have spent R1-million and “many weeks and months on the road” promoting the clamp “and now someone else [Yusuf] is making the money”.

Lawrence also said the devices were manufactured in Malaysia at 14 times the price it would cost in South Africa and that their importation created no local jobs.

According to a provincial spokesperson this week, the entire procedure cost R288.60 per patient, which compared favourably with the R369.70 for the conventional forceps-guided procedure.

Having met Yusuf on a number of occasions to negotiate a compromise, Lawrence said: “He knows nothing about health — he’s in it for the money. He knows people in government, he has contacts. He’s really a connections guy.”

Tariq was photographed hobnobbing with Zuma at a glitzy evening function last month. In one photograph he is seen shaking Zuma’s hand; in another, he stands shoulder to shoulder with him.

Although the photographs do not suggest impropriety, they do show that the Yusuf family enjoys access to the president.

A former employee of Yusuf, Anash Latchman, told the M&G last year that “[Yusuf] always said he had connections in the ANC. He harboured ANC comrades when he was in exile in Zambia in the 1980s.”

Zuma spent several years in Lusaka during the late 1980s as the ANC’s head of intelligence.

Pascal Garrioch, a businessman identified in three of the photographs, said the function was linked to a charitable foundation with ties to Zuma.

On the morning of September 4, Zuma addressed a Commemoration Day event at the Union Buildings for police killed in the line of duty. There is no record of him attending any other official functions on that day.

Garrioch declined to answer further questions but confirmed that he knew Tariq.

Like Tariq, Garrioch appears to be involved in business with the government. A summary of Garrioch’s professional interests on LinkedIn states: “Focus on creating business models that integrate private and public sector initiatives in developing countries.”

A man of intelligence

Yusuf’s links with prominent ANC members with former intelligence connections do not stop at Zuma. He has a company with Masetlha, Vegarox, which was registered in 2009.

Masetlha, who was based in Zambia in 1985 as the ANC’s regional political co-ordinator, did not respond to calls and an SMS.

Vegarox is associated with Yusuf’s Tara KLamp-linked company, Intratrek, through a common website, although they are located at separate physical addresses.

A third partner in Vegarox, Louis Siemens, declined to comment.

1. Ibrahim Yusuf was linked to a Zambian Mandrax smuggling network in the mid-1980s.

Evidence: Yusuf was named in a 1985 Zambian court judgment and Zambia’s Drug Enforcement Commission told the M&G last year that Yusuf “is a well-known drug trafficker”.

Response: Yusuf claimed he was never charged and that there was no pending investigation against him. A source sympathetic to Yusuf claimed his detention was political harassment.

2: Yusuf sold “pill packages” in the 1980s, which were favoured by Mandrax smugglers.

Evidence: In a 1987 affidavit one-time drug smuggler Vuyo Ndzeku identified Yusuf, alias Iboo, as a packager and seller of Mandrax.

Evidence: Comments in Zambian media in 2002 by law enforcement officials, who also provided the M&G with written confirmation of both allegations last year. The charges still stand.

Response: Yusuf’s lawyer said: “There are no investigations of whatever nature … in Zambia or any country.”

5: Yusuf has been on the run from the Zambian authorities since 2001 in connection with allegations 3 and 4.

Evidence: Zambia’s Drug Enforcement Commission told the M&G last year that “the charges against him still stand … [We are] resolved to bring him back … so that he can face the charges.”

Response: His lawyer said that Yusuf had been to Zambia “a number of times since 2001” and obtained police clearance to enter South Africa in 2003. — M&G reporters