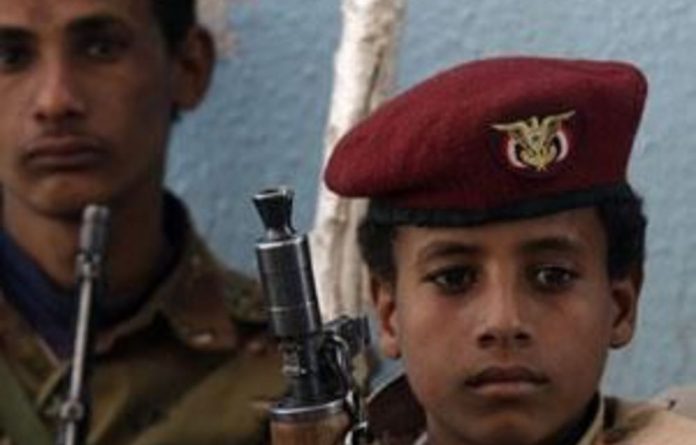 At least five people died in fierce clashes in Yemen’s capital between President Ali Abdullah Saleh’s troops and rival forces on Saturday, a day after the United Nations (UN) urged the embattled leader to hand over power.

Witnesses and Agence France-Presse correspondents in Sanaa said explosions were heard throughout Sanaa and massive plumes of smoke and fire were seen rising from several neighbourhoods where opposition forces are stationed.

An AFP correspondent said ambulances were seen racing out of the Hasaba district that is home to tribal chief Sheikh Sadeq al-Ahmar and his brothers, whose armed tribesmen have been battling Saleh’s troops for weeks.

The war-torn district has become a ghost town, sealed off by Saleh’s troops, with no one allowed in or out, according to an AFP correspondent on the scene.

Dissident General Ali Mohsen al-Ahmar who defected in March in support of anti-government protests sweeping the country blamed Saturday’s violence on Saleh and called on the international community to intervene.

He urged the international community to take “decisive and urgent” action to force Saleh from power or risk “a civil war.”

Camped out
In a statement, the general accused the president of giving orders to his sons and relatives who command Yemen’s elite military forces to “attack with all weapons … and cleanse Hasaba district and destroy everything” in their path.

In the Change Square area, where thousands of protesters have been camped out calling for Saleh to quit, fierce clashes erupted between government troops and defected soldiers loyal to the dissident general.

The general and tribal chief, both former staunch allies of Saleh, are now his arch-rivals, having thrown their support behind the nationwide protests which have triggered Yemen’s political crisis.

Saturday’s violence came a day after the UN Security Council unanimously passed a resolution that “strongly” condemns the deadly government attacks on demonstrators and backs a Gulf plan for Saleh to end his 33 years in power.

Several hundred people have been killed since the protests against Saleh erupted in late January.

Saleh has for months refused to buckle under intense local, regional, and international pressure to resign and hand power over to his deputy, vice-president Abdrabbo Mansour Hadi.

Under a Gulf Cooperation Council (GCC) initiative, Saleh must step down within 30 days of signing the deal handing him and his family immunity from prosecution, a controversial component of the transition plan.

Tougher action
Yemen’s Nobel Peace Prize winner Tawakkul Karman criticised the UN resolution on Friday for supporting the immunity clause in the plan drawn up by Yemen’s energy-rich Arab neighbours in the Gulf.

“They have to discuss the ousting of Saleh and how he has to be handed over to the International Criminal Court (ICC) as a war criminal,” Karman said outside the UN in New York where she has been calling for a tougher UN stance on Saleh.

Calls for more decisive UN action have increased, with tens of thousands of pro-democracy activists urging the world body to step in and stop the violence engulfing the impoverished country.

The protesters have also increased their calls for Saleh to be tried before the world court.

Britain’s UN ambassador Mark Lyall Grant said the resolution does include some “tough messages” for Saleh and that there would be “no impunity for human rights abuses,” despite its clear support for the GCC initiative. — AFP