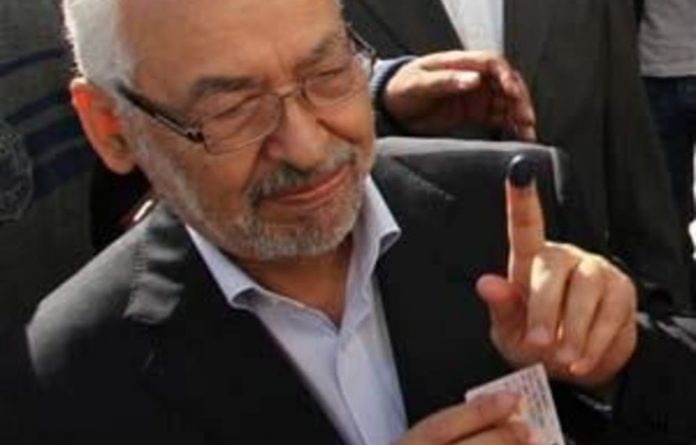 Moderate Islamists said on Monday their party appeared to be ahead in Tunisia’s first free election since an uprising earlier this year that set off the Arab Spring revolts, hinting at a shift in a country long known for its secularism.

Most forecasts point to the Ennahda party emerging with the biggest share of the vote, an outcome that worries secularists and could be replicated in other Arab states when they hold their own post-Arab Spring elections.

Tunisian radio read out voting figures obtained from districts in the northern town of Beja that showed Ennahda in the lead, with the centre-left Congress for the Republic Party (CRP) also doing well.

Ennahda said its own polling suggested the same. Parties are allowed to have representatives present during the counting process.

“The results are very good for Ennahda. We don’t want to give details but it’s clear that Ennahda has enjoyed a level of success that in some cases equals the results of the voting abroad,” an Ennahda official said.

Ennahda, citing its own, unofficial tally from votes cast by the large Tunisian diaspora before Sunday’s election, said there were indications it had won half the vote abroad.

“Ennahda was first in all the foreign polling stations,” its campaign manager, Abdelhamid Jlazzi, told a gathering of party workers. “We got more than 50%.”

Determined voters
The 217-seat assembly Tunisians are electing will sit for one year, re-write the Constitution, choose a new interim government and set dates for parliamentary and presidential elections.

Turnout was more than 90% — a mark of Tunisians’ determination to exercise their new democratic rights after decades of repression.

Samir bin Omar of the CRP said the party was hoping to come in second, which would be a blow to the Progressive Democratic Party (PDP). The PDP stood out among the major parties for its declared opposition to coalition government with Ennahda.

The former ruling RCD party of ousted President Zine al-Abidine Ben Ali was dissolved and no political group has emerged as a clear address for supporters of the previous regime.

“According to most statistics we’ve got from around the country, we have are in the second place behind Ennahda nationally,” bin Omar said.

State radio reported that incomplete counts in two provincial cities, Sfax and Kef, also had Ennahda in the lead. The CPR was in second place in Sfax while Ettakatol, another socialist group, was runner-up in Kef, the radio said.

With an unexpectedly large number of ballot papers to count, election officials said it was likely to be Monday or even later before they have results to announce.

Changing the course of history
Tensions have been high in recent weeks after fundamentalist Islamists attacked a TV station for showing a film deemed blasphemous.

“The secretary general encourages all stakeholders to remain committed to the principles of inclusiveness and transparency throughout the remaining parts of the transition process,” a statement said.

US President Barack Obama said Tunisia’s revolution in January had “changed the course of history”.

“Just as so many Tunisian citizens protested peacefully in streets and squares to claim their rights, today they stood in lines and cast their votes to determine their own future,” he said in a statement issued by the White House.

The suicide of vegetable peddler Mohamed Bouazizi, who set himself on fire in despair over poverty and government harassment, provoked mass protests which ended Ben Ali’s 23-year grip on power.

This in turn inspired uprisings in Egypt, Libya, Yemen, Syria and Bahrain which have re-shaped the political landscape of the Middle East and North Africa.

Ennahda’s fortunes may have a bearing on Egyptian elections set for next month in which the Muslim Brotherhood, an ideological ally, also hopes to emerge strongest.

Contradictions
Western diplomats say Ennahda is unlikely to win a majority in the assembly, forcing it to make alliances with secularist parties and therefore diluting its influence.

He says his party will respect women’s rights and not try to enforce any personal morality code on Tunisians.

But the prospect of it winning a share of power still makes some people feel uncomfortable in Tunisia. It has secular traditions which go back to its first president after independence from France. He called the hijab, or Islamic head scarf, an “odious rag”.

When Ghannouchi emerged from the polling station where he cast his vote on Sunday, about a dozen secularists shouted at him: “Degage”, French for “Go away”, and “You are a terrorist and an assassin! Go back to London!”

“I’m not so optimistic about the result of the vote,” said Ziyed Tijiani, a 26-year-old architect after he cast his ballot on Sunday.

“I think the Islamists could win. It’s not what I want. They may try to change the way I live,” he said, accompanied by a young woman dressed in a pair of jeans and a T-shirt.

‘On duty for my country’
Across the country on Sunday, queues stretching hundreds of metres long formed outside polling stations from early in the morning for an election which could set the template for other states emerging from the Arab Spring.

“This is the first time I have voted,” said Karima Ben Salem (45) at a polling station in the Lafayette area of Tunis.

“I’ve asked the boys to make their own lunch. I don’t care … Today I am not on duty. Or rather, I am on duty for my country,” she said.

An Ennahda victory would be the first Islamist success in the Arab world since Hamas won a 2006 Palestinian vote. Islamists won a 1991 election in Algeria, Tunisia’s neighbour, but the army annulled the result, provoking years of conflict.

Tunisia has a tiny minority of hardline Islamists, but the policies Ennahda espouses are more in keeping with mainstream Tunisia, where most people take a laid-back view of Islam’s strictures on things like drinking alcohol.

“This morning I voted for Ennahda and this evening I am going to drink a few beers,” said Makram, a young man from the working class Ettadamen neighbourhood of Tunis.

Yet observers say there is tension inside the party between Ghannouchi’s moderate line and more vehement Islamists among the rank-and-file.

A final election rally on Friday illustrated the party’s contradictions as Suad Abdel-Rahim, a tall, glamorous female Ennahda candidate who does not wear a veil, addressed the crowd.

But many books on sale on the fringes of the rally were by writers who belong to the strict Salafist branch of Islam. They believe women should be segregated from men in public and that elections are un-Islamic. — Reuters