Yemen truce fails, 19 die as Saleh says he will resign 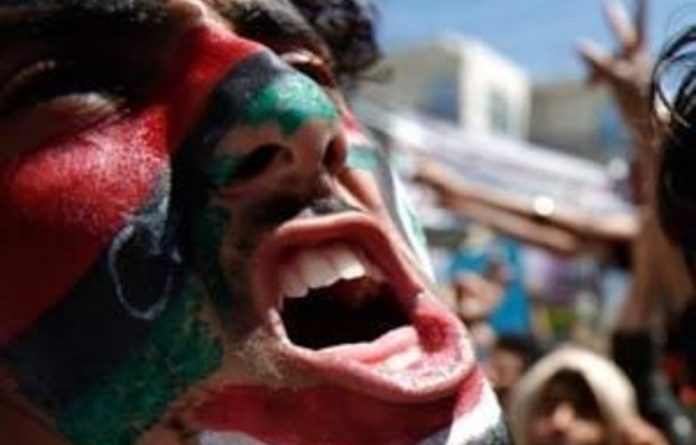 At least 19 Yemeni civilians, government troops and dissident soldiers were killed in continuing violence in the wake of President Ali Abdullah Saleh’s most recent pledge to resign, medics said on Wednesday.

The deaths, both in the capital Sana’a and in the country’s second largest city, Taez, came after Saleh told the US ambassador to Yemen on Tuesday that he would sign a Gulf-brokered power transition plan that calls on him to step down within 30 days.

The violence meanwhile flared as the government’s declaration of a truce with rival forces failed to materialise.

Medical officials said on Wednesday that the death toll from overnight violence reached 19, including a woman and her infant child who died in Taez when their house was struck by shells fired by government troops who, residents say, had been bombarding the city.

In the capital Sana’a, at least seven armed tribesman loyal to powerful Sheikh Sadeq al-Ahmar were killed in clashes overnight in the Hasaba district, the home of the chief and his extended family who have been battling government troops for weeks.

The government announced on its defence ministry website that nine of its soldiers fighting Sadeq’s tribesmen and rival forces loyal to dissident General Ali Mohsen al-Ahmar were also killed overnight.

Yemen has witnessed one of the longest and bloodiest uprisings of the “Arab Spring” that since January left hundreds of Yemenis dead and thousands more wounded.

Saleh has for more than nine months refused despite intensifying regional and international pressure to heed the call of the tens of thousands of Yemenis that have been marching in daily protests demanding his resignation.

The political stalemate has crippled the Yemeni economy, weakened the central government, and prompted defections from Saleh’s staunchest allies.

Mohsen and Sadeq, once Saleh loyalists, are now his enemies having thrown their support behind the protest movement as their troops battle Saleh’s forces in increasingly deadly street clashes.

On Tuesday, the government declared a truce with Sadeq and Mohsen’s forces, but within minutes of the announcement, gunfire and explosions were heard throughout the city.

The violence erupted as the US State Department said Saleh pledged he would sign the Gulf Cooperation Council initiative and step down.

Saleh, who has ruled Yemen for 33 years, has repeatedly failed to fulfil promises to step down. — AFP