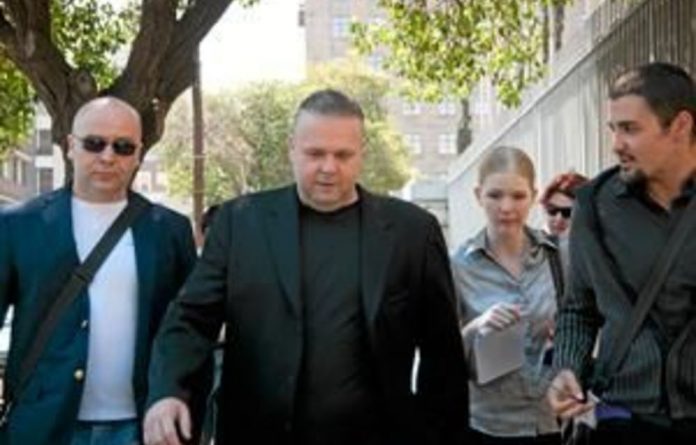 Czech fugitive Radovan Krejcir was linked to another mysterious incident this week when one of his alleged bodyguards was shot and arrested for armed robbery.

Jason Dominguez-Baya, a former member of the notorious Elite bouncer company, was shot in the arm on Sunday after he allegedly robbed an electronics shop in Pretoria West.

Described as one of Krejcir’s strongmen, he fled but was briefly detained by police and appeared in court on Monday.

Gauteng police spokesperson Lieutenant Colonel Lungelo Dlamini said the case was struck off the court roll because of a lack of evidence. Police sources said the complainant, the owner of the electronics shop, withdrew the charges against Dominguez-Baya.

Dlamini said six men had entered the shop and held up the owner at gunpoint before making off with R200 000. Dominguez-Baya was allegedly shot when the owner opened fire on the suspects and a gun battle ensued. He was later traced to his house after police found his bullet-riddled Toyota Hilux in Fountains Valley.

Three sources, two with links to crime intelligence and one linked to the Hawks, told the M&G that Dominguez-Baya had gone to the shop to collect money allegedly owed to Krejcir.

Krejcir present
They said Krejcir had been present at the Pretoria incident, but he had yet to be questioned by police. A Hawks spokesperson declined to comment.

On October 26 Krejcir’s attorney, Eddie Classen, confirmed his client’s presence at the incident in letters to a Sergeant Molelekeng of the Pretoria West detective services and Brigadier Patrick Mbotho from the police’s organised crime unit. The M&G has a copy of both letters.

In the letters Classen says that Dominguez-Baya was accompanied to the shop “on the fateful day” by Krejcir, Veselin Laganin, Miloslav Potiska — a Czech associate of Krejcir’s — and former bouncer Paul Kietzmann.

Classen said Dominguez-Baya and Krejcir “will co-operate with you in respect of any investigation that you seek to do pursuant to the incident”. Neither of the letters gives clarity on the precise circumstances of the shooting.

Approached attorneys
In the letters Classen says that Dominguez-Baya approached his attorneys to help lay charges “against his assailants”, but was detained before he could do so. He adds that Laganin had laid a countercharge of robbery with aggravating circumstances against the ­electronics shop’s owner, who he describes as “the assailants”.

This is not the first time Dominguez-Baya has been linked to Krejcir. Earlier this year it was reported that on the night Lolly Jackson was shot dead Dominguez-Baya “accompanied” Krejcir and security consultant Cyril Beeka to the Kempton Park house where the striptease king was murdered.

After Beeka was killed in Cape Town on March 21 in an apparent hit, the Sunday Times reported that Dominguez-Baya had “hounded” Beeka’s wife, Sonja. The harassment allegedly concerned her husband’s debts to Krejcir, including cars and money, although Dominguez-Baya denied the claim.

In 2007 Dominguez-Baya, who has been described as a member of Johannesburg’s “bouncer mafia”, and Kietzmann were arrested by former top cop Piet Byleveld and charged with assault and attempted murder after an incident outside a Sandton nightclub. The arrest happened during a crackdown on bouncer violence, it was reported.

In September questions were raised in the media over the nature of Krejcir’s relationship with Mark Andrews, a former Jackson associate who was murdered and found at the side of the R59 highway in the Vaal area. He had a gunshot wound to the back of his head and his hands were tied.

Andrews’s body was found within a week of the killing of Jackson’s family lawyer, Ian Jordaan, whose corpse was found burnt almost beyond recognition after he disappeared from his offices.

Main suspect
Andrews was the main police suspect after it emerged that, before he was killed, Jordaan was apparently forced to transfer R1.6-million from his firm’s trust account into a Bidvest account that police said belonged to Andrews.

At the time Krejcir, through his attorney, “declined” to answer questions posed by the M&G.

The police are still investigating the two murders.

Krejcir, who is wanted in the Czech Republic on various charges, including fraud and kidnapping, fled his home country for the Seychelles before entering South Africa on a false passport in 2007.

He is out on bail pending his trial for insurance fraud, due to start in the Johannesburg Magistrate’s Court in April.