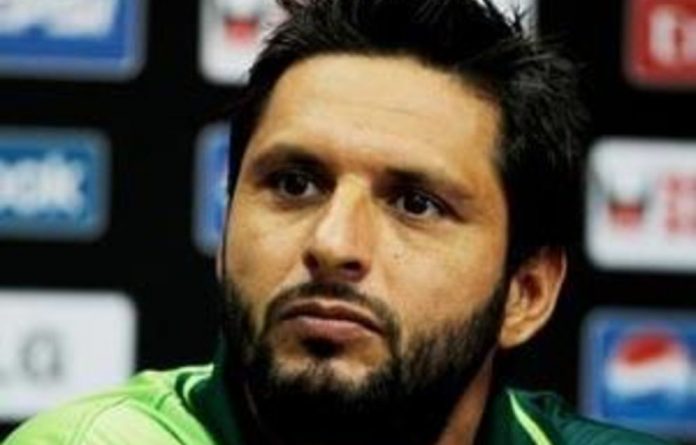 Pakistan World Cup captain Shahid Afridi hopes to return to international cricket this month after a productive meeting with the new head of the Pakistan Cricket Board (PCB).

“I’m very positive after sharing my views with the new (PCB) chairperson,” Afridi told reporters after an hour-long meeting on Wednesday with Zaka Ashraf in Lahore.

Afridi’s potential return is a boost for Pakistan just a day after Test captain Salman Butt and bowler Mohammad Asif were convicted in a British court of conspiracy to cheat and conspiracy to accept corrupt payments as part of a betting scam in a match against England in August 2010.

Butt, Asif and fast bowler Mohammad Amir, who had already pleaded guilty to both charges, could be jailed for up to seven years when they are sentenced later this week.

The PCB suspended the enigmatic allrounder’s contract and stopped him from playing abroad for violating its code of conduct when he issued statements against cricket board officials.

‘I just want to enjoy cricket’
Afridi started legal action to get the required permission to play for English county Hampshire before reaching an out of court settlement with the PCB.

The allrounder later announced he could only play once the PCB top management was changed.

Ashraf, who took over from Butt last month, had said he wanted to see Afridi back in action in the one-day and Twenty20 cricket formats. But the new PCB chief also wanted to consult other senior PCB officials.

“They didn’t directly say when I would be selected, but I am quite confident that I will soon return to international cricket,” Afridi said.

Afridi led Pakistan to the World Cup semifinals before losing to archrival and eventual champion India in March. He subsequently led Pakistan to a 3-2 win against the West Indies in a one-day series, but was criticized by both coach and the then manager Intikhab Alam in their tour reports.

On Wednesday, Afridi indicated he no longer was interested in being national captain.

“Now I just want to enjoy cricket and play for Pakistan,” he said.

‘It’s not about the captaincy’
Misbah-ul-Haq was Afridi’s deputy in the World Cup and is presently named captain for the ongoing Test, ODI and a twenty20 series against Sri Lanka.

Afridi said he had no problems with Misbah.

“He helped me a lot during the World Cup. Now the question is not the captaincy, the real question is to play for Pakistan and that’s all what I want to do,” he said.

Pakistan is in the process of recruiting a new head coach after nominating chief selector Mohsin Khan as the interim coach for the series against Sri Lanka.

The new PCB chief wanted to have three specialist coaches for the national team – bowling, batting and fielding.

That concept has Afridi’s support.

“The only thing I like to see is that all three coaches should have done specialised courses in their respective fields,” he said. “That’s the only way they could be held accountable.” — Sapa-AP