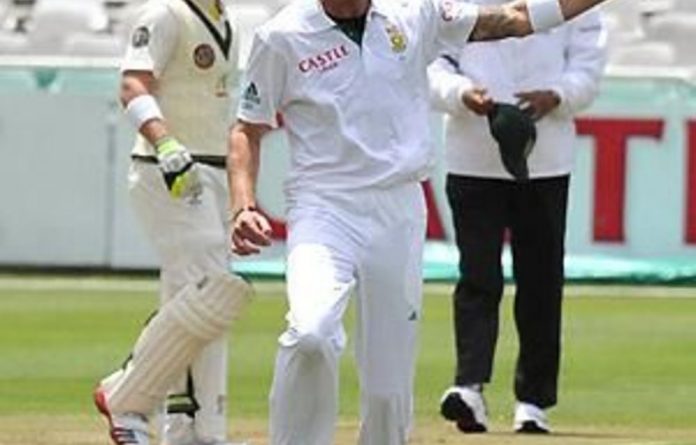 Dale Steyn justified his status as the number one bowler in the world as he returned figures of 4/31 and helped reduce Australia to 214/8 on the opening day of the first cricket Test against South Africa at Newlands on Wednesday.

Steyn, though, said the ranking meant nothing when he ran up to bowl and he still had to earn his wickets.

“It does nothing for you when you walk out onto the field,” Steyn said.

“You’ve still got to go out there and bowl the ball because there’s no halo over my head that says I’m number one and the batters must respect that.”

‘He batted bloody well’
There was a confrontation between Clarke and Steyn at one stage and the paceman said they had decided to hit him hard, but praised Clarke for his excellent innings.

“He’s a young skipper, and if you can cut the head off the leader, the rest of the body might fall apart too,” he said.

“We decided to hit him hard, but congratulations to him, he batted bloody well.”

Graeme Smith’s decision to send the opposition in to bat first was rewarded as wickets fell at regular intervals throughout the rain-affected day, in which only 55 overs were bowled.

The Phalaborwa Express made the early breakthrough, in the sixth over of the morning, dismissing Shane Watson (3), as the ball ballooned to Jacques Kallis at second slip.

Philander’s first foray
Debutant Vernon Philander picked up his well-deserved first Test wicket, moving the ball away from Phillip Hughes (9) and catching the edge of his bat.

The dismissal earned wicketkeeper Mark Boucher the accolade of being the first cricketer to take 500 Test catches.

The visitors lost the wicket of Ricky Ponting (8) shortly after lunch as Steyn got the ball to angle back towards the stumps.

An initial appeal for lbw was turned down but, after a review by the third umpire, Ponting was sent on his way and Australia were reeling at 40/3.

It was Smith and Boucher who had asked for the appeal and Steyn seemed unaware of the opportunity.

“Things happen pretty quickly out there when you’re bowling and you hear all sorts of sounds,” he said.

“He’s [Ponting] such a good player and I didn’t even celebrate it properly — it’s only the second time I’ve got him out in my Test career.”

Dynamic duo
The partnership of the day was forged between Shaun Marsh and Australian captain Clarke and together the pair put on 103 runs, off 138 balls, for the fourth wicket.

His final victim of the day was Brad Haddin (5), who edged him to Ashwell Prince in the gully.

Morne Morkel chipped in with the wicket of Mr Cricket, Michael Hussey (1), as Boucher pouched another catch.

Philander ended any hopes Mitchell Johnson had of repeating his last escapade at Newlands, where he made his highest Test score of 123 not out, in March 2009.

This time, he was dismissed for 20 as Philander bagged his second wicket and the bowler went on to get a third, that of Ryan Harris (5), to finish with 3/54.

Hundreds
Clarke batted superbly in conditions which better suited the bowlers and his 16th Test hundred came off 108 balls and included 16 fours.

“It’s a very special 100, mainly because we were under pressure when I went out there,” Clarke said.

“It’s always nice to step up and lead from the front but I had a bit of luck. I played and missed at a few, ducked and weaved early on, but it was special to be able to contribute and hopefully we can get a few more tomorrow and then we are going to have to bowl well.