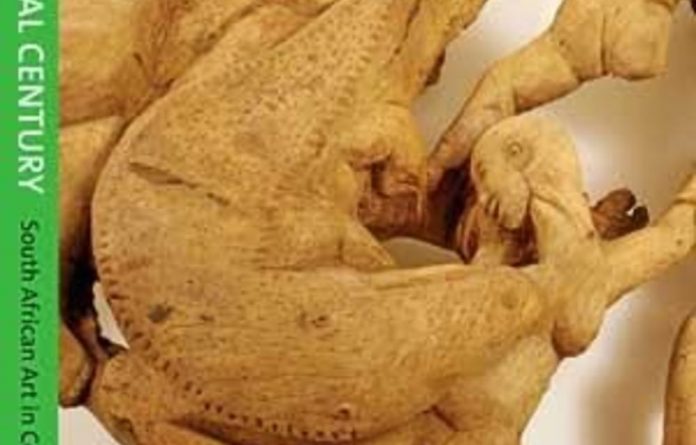 Few broad overviews of South African art exist and no one has been brave or foolish enough to attempt to produce an inclusive account in the post-apartheid era.

There are many good reasons for this — post-modernist critiques of meta-narratives, publishers’ concerns about the size of the market and the National Research Foundation’s bias towards academic journals all come to mind.

That South African art needed such a project was evident to Gavin Jantjes, an Oslo-based Cape Town-born artist and curator who went into exile in 1970. Jantjes secured funding from then-minister of arts and culture Pallo Jordan for the Visual Century project and he appointed me project manager in August 2007.

Lize van Robbroeck joined us in developing a framework for the project, which we presented to colleagues for comment. By January 2008 the Africa South Art Initiative, then newly registered as a non-profit organisation, took over project management of Visual Century and the department of historical studies at the University of Cape Town allocated us space for the project.

Jillian Carman and Thembinkosi Goniwe joined Van Robbroeck and myself as editors, with Jantjes as project director.

Locating SA art history
Collectively, we clarified the nature and purposes of the project. Key to this was the intention to locate South African art history within both historical and art-historical contexts, nationally and internationally. It was agreed that such a project should be written accessibly to enable it to reach a broad audience.

Beginning in 1907 (between the South African War and the union), when African art was being discovered as a source to revitalise Western art, Visual Century is a series of four books surveying 100 years of art practice. Each volume deals with a historical period and includes eight essays. Thirty-three writers contribute to the project.

In deciding on the periods for each volume we were faced with critical choices. What was a more significant turning point — the end of World War II (1945) or the formal ascent of apartheid (1948)? The end of the Cold War and unbanning of the liberation movements (1989-1990) or the first democratic elections (1994)? Does perpetually positioning 1976 as the pivotal point for the 1970s erase earlier, less memorialised precedents?

We were mindful that, if Visual Century was to succeed in reaching a wide audience, an unwitting consequence could be a whole new generation of children growing up thinking there were four distinct phases in South African art history, when our choice of four “periods” was at least in part a purely practical decision, informed by pedestrian concerns such as the budget, as well as a general sense of which period constituted an adequate spread of information across the series. Another project may have chosen 1960, 1983, 1985 or a whole other set of other dates completely.

Breaking new ground
In the end we adopted an original approach: Visual Century‘s periods overlap. This means that, although we do maintain the orthodoxies of locating change around memorialised historical moments, these appear as more fluid, less fixed points.

We encouraged fresh views on emerging art-historical orthodoxies by connecting discourses that tend to be treated in parallel — for example, in writing about land we did not deal only with the colonising gaze but also the view of artists from communities who lost land and we brought urbanisation and the landscape into the same discussion.

In another case we link artistic conventions of representation of the black “other” with museological conventions. In another example we linked liberation theology-leaning biblical sources from mission-educated artists to art produced by artists associated with the African independent churches, as well as individual dissident views on the churches’ complicity with apartheid.

Our choice of writers was determined by the briefs we developed for each volume, with concerns for a plurality of disciplinary approaches and perspectives. Writers include art historians, museologists, curators, artists, art theorists, literary scholars, poets, urban geographers and cultural activists. Editors’ choices were decisive in selecting writers and in the subsequent shifts in emphasis that can be observed across volumes.

Multiple views
Writers made their mark in how they interpreted their briefs and, critically, in the choice of works they introduced into their essays.

One consequence of having multiple authors dealing with overlapping periods and themes was the risk of duplication. Our approach was to allow for an artist (or a work) to be discussed in more than one place if different points (even contrary ones) were being made.

The managing of themes within volumes presented its own challenges. In some instances it became evident that containing themes within the period denoted by the volume was problematic since it ran the risk of distorting particular trajectories, especially when important precedents were not addressed in earlier volumes. Here our approach was to acknowledge works falling outside of the period, but to retain the focus of essays on works falling within the years covered by the relevant volume.

Trying to balance multiple authors and perspectives with the need for a nonetheless sufficiently coherent whole required “eagle-eye” perspectives from editors and flexibility by writers.

Most writers were extraordinarily generous, given the modest fees they were paid and above-
average editorial engagement required by the project. In some cases they were justifiably annoyed.

Sticky setbacks
It was also inevitable that a project of this scope would experience some logistical challenges. Few writers met the original deadline, with the last one coming in a year behind schedule. Seven essays (almost a volume’s worth) were affected by writers withdrawing. Picture research proved challenging, not least because of the increasing sensitivities surrounding copyright and permissions. Finally, three years beyond its initially naive one-year schedule, and after several missed publication deadlines, Visual Century went to press.

It is wide-ranging and open-ended. It sets a new standard for collaborative research projects in South African and international art history. It invites critical engagement with content — did we choose the right themes and did writers address these themes adequately? What are the big gaps remaining in our art history? Visual Century poses key questions about methodology — can chronological and thematic approaches be reconciled? How does one balance coherence with plurality?

Nationally, Visual Century raises the spectre of the inadequacy of resources in schools and whether such a project cannot only play symbolic redress as a text but must also bring meaningful redress into learning environments.

Internationally, Visual Century raises questions about the writing of national histories, especially those historically outside the Western canon and how these can inform the rewriting of a genuine art history.

An ambitious project, Visual Century inevitably carries with it the burden of representation — different constituencies will have different expectations and the measure of its success will be in how many of these it can meet.

The Visual Century: South African Art in Context 1907 to 2007 is published by Wits University Press. The Cape Town launch takes place on November 21 at 11am at Iziko South African National Gallery.

Designing a new theory of art

National Arts Festival 2017: Disruption all around us and still we haven’t learnt