The amazing whiteness of local staples 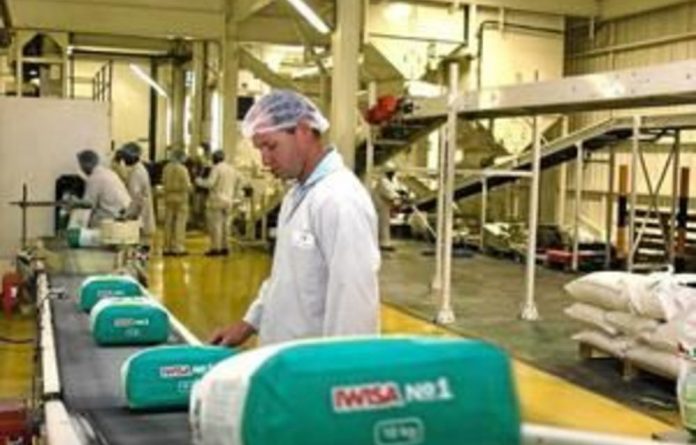 South African suppliers of staple foods are in a “race with whiteness”. In contrast to more advanced economies, the country’s maize meal, its biggest staple by far, has become whiter over the past decade as big millers have taken advantage of technological advances to remove the few remaining non-white specks.

It is no coincidence then that South Africa’s leading maize-meal brand is called White Star and its leading flour brand is Snowflake.

In advanced countries, brownness is increasingly favoured in starchy products, because it indicates healthier ingredients and roughage, usually correctly.

Choosing the more intensively processed and relatively unhealthy food options is not unique to South Africa: it is a feature of many emerging nations globally that consumers abandon traditional foods in favour of processed foods.

But these maize-meal consumers demand a product that is white — stripped of roughage and nutrients — and manufacturers have remodelled their businesses to serve this demand.

For about a year after the 2008 global financial crisis, the consumption of maize meal climbed strongly, reversing a long trend of slowly slipping consumption in which increasingly affluent mass market consumers increased their spend on other staples such as bread and rice. (All rice is imported.)

However, industry observers say, since last year the economic conditions for mass-market consumers have been so tight that they are generally eating less of all staples.

But when consumers do eat maize meal they demand it must be white. This is probably a reflection of an international trend in which, generally, populations who consume staples prefer them to be as bland as possible. Even in South America and Mexico, where maize meal is consumed, white is in demand.

Premier Foods’ technical director, Gerrit van Rooyen, said blended white and yellow maize-meal products were only produced and sold in South Africa in the mid-1980s during a drought when the Maize Board, which controlled the industry, ruled that the distinctly yellow blend with its carroty flavour had to be made. Any attempt to blend yellow and white maize today would be commercial suicide for the miller, he said.

‘Pursuit of whiteness’
In South Africa, the three largest maize milling companies — Pioneer Foods, Premier Foods and Tiger Brands — account for about 60% of total maize-meal sales; the rest is produced by smaller regional and local millers. Generally, the smaller the miller the less it is focused on achieving absolutely white “super” — which normally means fully degerminated — maize meal, and the lower the price the consumer pays.

In the pursuit of whiteness, the big millers began installing new-generation degerminators about a decade ago. In the grinding process, the degerminator extracts the greyish germ of the maize, which contains oil and other nutrients. The more of the germ extracted, the whiter and blander the end product.

Maize meal that has the least germ extracted is called “unsifted”; moving up the scale it becomes “sifted”, “special” and “super”. Unsifted and sifted maize-meal products have been discontinued by the bigger millers. “Super” is generally defined by millers as having less than 1% oil and it almost exclusively consists of the starchy endosperm. Degerminators were originally expensive technology used only by large mills, but today even relatively small maize millers have them.

The germ goes into cattle feed, like almost all the other nutritious waste the food processing industry disposes of, and animal feed is thus more nutritious than human food. The degermination process also reduces the taste of the maize meal and, because of its low oil content, extends the life of the packaged product.

The latest development in the quest for greater whiteness is colour-sorting machines, which examine every grain of maize and remove any discoloured (non-white) grain. The discoloured grain also goes into animal feed.

A manager at Premier Foods’ Kroonstad mill, the largest in the world, said there might nevertheless still be some discoloured specks in the final product, which happened when the seed was white on the outside but had discolouration within.

X-raying seeds
It is a problem the industry has not yet resolved. Achieving pure whiteness would require the X-raying of every seed going into the mill, which is simply too expensive — at least for the moment.

One other possible option to make maize meal and wheat flour whiter would be to bleach them, but this would require the addition of chemicals and the disclosure thereof on the product labels, making it an unacceptable option, according to Van Rooyen.

Apart from maize, there is a ­similar bias among consumers towards whiteness in both their bread and flour. But Van Rooyen said there might be an exception developing in bread sales, because lower-income consumers were increasingly opting for brown bread. However, this would most likely be because brown bread generally cost less than white and did not attract value-added tax.

In 2003 South Africa introduced the mandatory, legislated fortification of maize meal and wheat flour. Since then, millers have had to add to their maize meal or flour a micronutrient “cocktail” of vitamin A, vitamin B1 (thiamin), vitamin B2 (riboflavin), vitamin B6 (pyridoxine), niacin, folic acid, iron and zinc.

To save costs, many small millers that supply maize meal and flour to local markets do not adhere to this law. As in many other instances, South Africa has great laws but less great implementation and policing.

Some small millers that do not degerminate say mandatory fortification is only clawing back what degermination and other processing take out of the maize. And because they do not degerminate, they are providing a healthy product anyway — although maize meal that does have the germ does not contain vitamin A.

The opening of the new supersize mill, which houses three mills under one roof, is part of an ­industry trend of consolidation.

Given the strong demand for maize meal and the pressure to reduce prices, all major maize millers have been increasing the size of their mills, rationalising the smaller ones and installing top technology in successive upgrades in their big mills.

Standing in the cavernous despatch area of the mill, which was originally built in 1950, Premier Foods chief executive Ian Visser described the Kroonstad building as a “grand old lady with the heart of the monster”.

In the early days, milling machinery was largely wooden because of the high steel costs, and both maize and wheat were milled at the Kroonstad venue. The mill has since undergone many upgrades and the only relic of the past is beautiful teak floors.

Premier Foods’ brands are Iwisa, Nyala and Super Sun. The company is the largest producer of maize meal in South Africa, although its biggest brand, Iwisa, is not the leading South African brand — Pioneer Foods’ White Star occupies that spot.

White Star was a latecomer to the big maize-meal race, but in the past decade it has overtaken Iwisa and Ace (Tiger Brands’ flagship maize-meal brand) through intensive marketing, cutting prices and wet demos (samples) in retail outlets.

Its name must have helped, too, reflecting more obviously the whiteness of its product than Iwisa and Ace do.

Although Premier Foods has rationalised its maize mills to one that is located in the heart of a major maize-producing area, it has five flour mills spread throughout South Africa: in Cape Town, Durban, Thaba Nchu (near Bloemfontein), Vereeniging and Pretoria.

It still has multiple flour mills because it is advantageous to locate some near the main centres of South African wheat production — hence the Thaba Nchu and Vereeniging mills — but others are near the ports because a growing proportion of South Africa’s wheat is imported.

Although Premier Foods may own the leading South African flour brand, the biggest mill development in the flour industry is being undertaken by Tiger Brands at Henneman in the Free State, about 55 kilometres away from Kroonstad.

There Tiger Brands is spending about R560-million to erect a flour mill that will raise that group’s milling capacity by a massive 25%. The mill is due to be commissioned in December next year. However, it will not be the world’s largest flour mill by any stretch, because flour is a more popular staple worldwide than maize.

The dummy’s guide to climate change for southern Africa