US searches for a cultural response to economic hardship 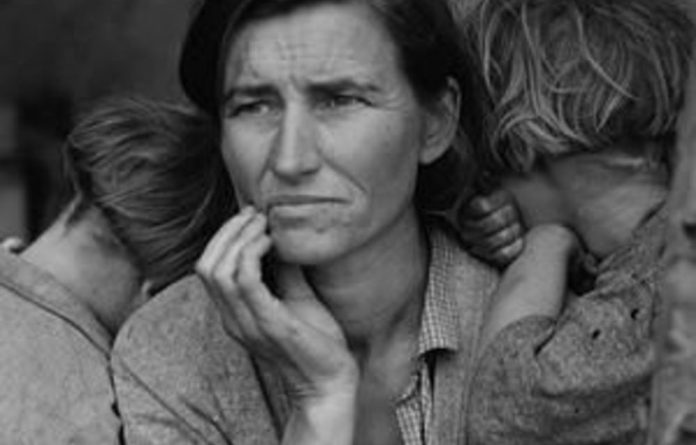 By any standards, watching Jeff Nichols’s much lauded film Take Shelter is a haunting experience. Its central character, Curtis LaForche, a working-class Midwesterner trying to hold on to his family, job and sanity in rural Ohio, is increasingly plagued by apocalyptic dreams that seem to be leaching into the real world.

The audience watches LaForche’s life and world fall apart in a film that is soaked with both supernatural imagery and the everyday American problems of losing a job and being unable to afford healthcare for your family.

The film vibrates with uncertainty and foreboding for the end of the American way of life. Critics have hailed it as as a masterpiece of the great recession and the economic crisis.

Nor is the film alone in revealing the impact of the recession on almost every cultural aspect of modern life in the new US age of anxiety. With headline jobless levels stuck at 9% — and the real figure much higher — and almost 50 million people living in poverty, no wonder there is a cultural angst.

A sense of the end-times is also apparent in Rise of the Planet of the Apes and Contagion, where super-intelligent apes and killer microbes respectively are poised to wipe out mankind.

Looking back with longing
Yet doom and gloom is not the only cultural response to the recession. There is evidence of a renewed longing for the certainties of the 1950s and 1960s when — in the popular mind at least — good solid jobs were plentiful, US factories made products exported around the world and the suburban dream was one of white-picket fences, not foreclosure signs. From high-street fashion to retro trends in cocktails to the renewed popularity of facial hair for men there is a cultural longing to look back and ignore hardships.

The series’ journey into a simpler, more solid “Golden Age” is not alone. It has been followed by shows like Pan Am, which celebrates and glamorises the life of air stewardesses in the 1960s, when flying was a far cry from the crowded hell that it is nowadays. At the same time, remakes of classic old TV shows such as Mr Ed, The Man From U.N.C.L.E. and Bewitched are in the works, also harking back to simpler times.

“There is a tendency among television storytellers to look to the past when current times are tough. Audiences need to be removed from contemporary settings to provide them a way to, in a sense, relocate from reality,” said Professor Jeff McCall, a popular culture expert at DePauw University in Greencastle, Indiana.

It is not just TV shows that are seeking an escape to a happier past. The Cleveland Institute of Art is showing an exhibition called Masters of Abstraction featuring mid-century artists Robert Mangold, Julian Stanczak and Ed Mieczkowski. All painted highly abstract, often Op Art, pieces celebrated for their cheerful, bold bright colours and lack of social context. “It is completely optimistic art,” said Cleveland gallery director Bruce Checefsky.

The show’s opening was a huge success with Checefksy describing it as perhaps his most popular in the last decade. He has a simple explanation. “The outlook is so grim that people are looking back to the 60s and this art when there was at least a sense of optimism. It was staggering the amount of people coming through and I think it reflected those trends,” he said.

Blinded by nostalgia
Much of the “golden age” that is being yearned for is mythical. The 1950s and 1960s may have been a time of economic advances but it was also a period of deep sexism, homophobia and racism, all on display in Don Draper. “I am not sure Mad Men or the Draper character depict a ‘better’ time,” said Professor Dann Pierce, a communications expert at the University of Portland, Oregon. McCall agreed. “The 1960s were actually turbulent in many ways, including a cold war, the Cuban missile crisis, political assassinations, urban riots and Vietnam. It is not necessarily a time we should long to revisit,” he said.

But not every cultural reaction to hard times is escapism. Another way is to tackle the problems. Today bankers and big business are the villains in films and TV shows. Just as communists and Soviet spies were the bad guys during the cold war and terrorists were the enemy during the 1990s and 2000s, now it is the high lords of finance who are taking the cultural hits.

From Oliver Stone’s Wall Street: Money Never Sleeps, which brought back the 1980s demon figure of Gordon Gekko, to Margin Call in 2011, the finance industry’s role in the crisis is being examined and, usually, a harsh judgment is being passed. The list of films from the last couple years is long and includes The International, where the enemy is a bank, to comedies such as The Other Guys and Despicable Me where offhand jokes skewer banks and bankers even in children’s films.

Music has also got in on the act. Rappers like Young Jeezy have sung about the recession, as has Neil Young. Of course, there is precedence for all of this. The Great Depression, far worse than today’s economic woes, also had a profound impact on cultural life. Bing Crosby’s hit song Brother, Can You Spare a Dime? reflected the devastating impact of the crisis on ordinary lives, as did an explosive growth in blues music.

In literature, Steinbeck’s The Grapes of Wrath explored the hard times of the poor and out of work. At the same time there was escapism in an explosion of exuberant jazz culture and the emergence in 1938 of the figure of Superman, who no doubt symbolised both a yearning for happy simplicity and a desperate desire for an All-American hero to rescue the country.

There was also nostalgia for simpler times in the form of the immense popularity of western films and radio shows, like The Lone Ranger, in which heroes were easily identifiable, problems were solved with a quick fight and villains easily identified and eventually vanquished.

The hand that feeds
One crucial difference, however, was that during the 1930s there was a massive government sponsorship of the arts via the New Deal. Huge sums of money flowed into the pockets of jobless painters, sculptors, writers, musicians and poets in a bid to create work at a time of immense hardship. But it also was a genuine effort at encouraging, or saving, cultural expression. Organisations including the Federal Theatre Project, the Federal Writers’ Project and the Federal Music Project were all set up in the late 1930s.

The current economic tough times have no equivalent. While billions of dollars have poured into banking bailouts and help for the car industry, there has been no meaningful effort at state help for arts funding, nor is there much public appetite for one. Arts organisations struggle for money more than ever before.

“Fundraising is hard. It is even more challenging now,” said Checefsky. A recent report by the National Committee for Responsive Philanthropy found that because so much cash was now coming in from rich individuals, rather than government, it was skewed to the interests of a wealthy, white audience: mostly funding large museums, opera and symphony orchestras.

Despite the difficulty in raising cash, especially for small projects and in disadvantaged communities, the arts are flourishing. A recent survey showed that some 2.2 million Americans can now be classified as professional artists, up from 1.9 million in 1996. So, when it comes to creating art about the recession, whether via escapism or exploration or condemnation, there is no shortage of people to do it.

Cultural highlights of the thirties depression

The Grapes of Wrath

John Steinbeck’s masterful tale of the poor Joad family’s flight from dust bowl Oklahoma won a Pulitzer prize after it was published in 1939. John Ford’s film version was made just a year later and it remains an American classic.

Brother, Can You Spare a Dime?

The song was written in 1931 by Yip Harburg, a socialist whose small business went bust after the 1929 Wall Street crash. The best known version was sung by Bing Crosby and it became an anthem of the Great Depression.

The grim black and white 1936 picture of stern-faced mother Florence Owens Thompson, surrounded by her children, became emblematic of the Depression’s impact on poor workers. Dorothea Lange took the picture while working for the government and documenting rural poverty. Thompson was a migrant worker.

Detroit murals by Diego Rivera
Mexican muralist genius and communist Diego Rivera was commissioned to create a series of 27 fresco panels between 1932 and 1933 in the Detroit Institute of Art. He used the opportunity to pay tribute to the industrial city’s tough working labour force and its factory landscape.

Superman
Though there were personal reasons behind the creation of the comic book hero Superman by Jerry Siegel and Joe Shuster, the cultural success of the Man of Steel played out against the Great Depression. The public longed for a saviour who was impervious to harm and with superhuman strength. First published in 1938, Superman rapidly became an all-American icon. —

The extent and length of the journey depend on a few factors, but a hard landing seems unavoidable
Read more
Coronavirus