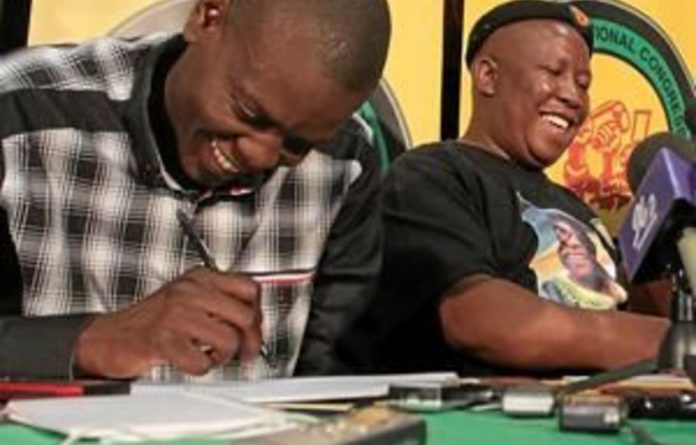 The ANC Youth League’s blistering attack on the ruling party’s national disciplinary committee (NDC) finding on youth league leader Julius Malema last week is the first step towards exposing President Jacob Zuma as the “worst leader” the ANC has had in its history, league members told the Mail & Guardian.

The youth league believes Zuma and ANC secretary general Gwede Mantashe are involved in a conspiracy to neutralise the league’s campaign to oust the two ANC leaders at the ­party’s crucial conference in Mangaung next year.

It contends that by suspending its leaders Zuma is out to reduce the league to a mere desk at Luthuli House.

This week Malema tore into the NDC’s ruling and accused its chairperson, Derek Hanekom, of a political conspiracy and persecuting youth league leaders.

Malema also lambasted Mantashe for prejudging the outcome of the disciplinary committee ruling after he told delegates at a Food and Allied Workers Union conference that league leaders would be “punished”.

An ANC strategist close to the youth league said that it would be more militant now because “the battlelines have been drawn and this is a permanent battle, until Jacob Zuma, ANC president, is defeated”.

It was learnt this week that the league’s fight-back strategy would include rallies to explain to ANC members that the disciplinary committee had been used to settle political scores.

“The strategy is that the league’s leaders will push until the ANC fires them. This will show that, in Zuma, the ANC has the worst president ever, who cannot work with the youth league and who cannot groom young people,” said the source.

The M&G also understands that the league is working on a document that will refer to the ANC’s own moral charter, titled “Through the Eye of the Needle”, with the aim of showing that Zuma is a weak leader.

“Through the Eye of the Needle” is intended for use by ordinary ANC members in selecting party leaders endowed with virtues such as selflessness and other moral qualities.

Among other things, the youth league document will focus on Zuma’s weaknesses as a leader, including his extramarital affair with Sonono Khoza, the daughter of his friend and Orlando Pirates boss Irvin Khoza. It will also allege that Zuma has used his power to enrich his family and close friends with lucrative government tenders and multimillion-rand black economic empowerment deals.

The league will tell the appeals committee, chaired by businessperson Cyril Ramaphosa, that the NDC chose to ignore evidence that favoured its case, used technicalities and selectively quoted the ANC constitution.

It is understood that it will underscore the NDC’s rejection of evidence given by Zuma’s special adviser on foreign policy, Lindiwe Zulu, that the youth league’s statements on Botswana did not contradict ANC policy.

In testimony at the original hearing Zulu agreed with the youth league statement that there was a decline in the African agenda of the ANC and that the African Union and Southern African Development Community could be blamed for this.

Malema also took the NDC to task for rejecting Human Settlements Minister Tokyo Sexwale’s objection to Mantashe’s evidence that ANC officials were unanimous in deciding to charge the league.

Sexwale argued that it would not have been a unanimous decision because ANC deputy president Kgalema Motlanthe and ANC treasurer general Mathews Phosa were not present at the meeting.

The NDC said it chose to believe Mantashe’s argument because he was one of the national officials.

The league is understood to be planning to use branch leaders to drum up national support for Malema and his circle.

It also intends to split Zuma’s support in KwaZulu-Natal, the biggest ANC province. In the Eastern Cape, Malema’s backers are using former ANC provincial leader Andile Nkuhlu to canvass support on the ground for the league’s campaign.

Juju’s support
Malema claims to have support in Limpopo, the Northern Cape, Western Cape and Gauteng, while North West and the Free State are likely to be divided.

Zuma, on the other hand, is guaranteed support in KwaZulu-Natal, most of the Eastern Cape and Mpumalanga, where ANC provincial chairperson David Mabuza’s allies recently won all the ANC regions. A Zuma ally pointed out that these three provinces would send more than half the delegates to next year’s conference.

Those who support Zuma believe he will be returned uncontested at Mangaung next year, as Motlanthe is unlikely to engage in a bitter battle with him. They also question the youth league’s ability to win support across provinces, saying the current crop of youth leaders are not adept at lobbying ANC branches.

However, Isaac Mahlangu, the former ANC provincial secretary in Mpumalanga, argued that it could not be assumed that the provinces would support Zuma.

“The regional conferences were stolen. They were not contested,” Mahlangu said.

“We have a very fluid environment in Mpumalanga and people will go with the winning camp in Mangaung.

“In the run-up to Polokwane our provincial and regional executive committees supported [Thabo] Mbeki. But they defected at the conference and went with Zuma. The same happened at the NGC [national general council] on whether to support a resolution on nationalisation.”

Mahlangu said youth league structures in Mpumalanga favoured a political solution to the current impasse between the youth league and the mother body.

“The youth league’s battle for a political solution is highly winnable because it’s morally justifiable and in defence of its autonomy,” said Mahlangu.

“Hanekom’s ruling was nothing but a political report. Why not take that report and present it to the NEC and ask the youth league to clarify itself?

“What Hanekom did last week has torpedoed the construction work that the league has done since 1991.”