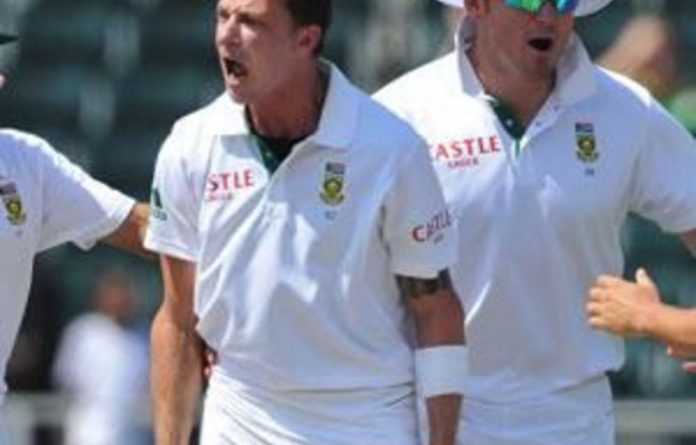 Fighting to retain his place and to save his team, Ricky Ponting scored his 57th half-century to steer Australia to 142 for the loss of three wickets before bad light stopped play on the fourth day of the final Test at the Wanderers on Sunday.

Ponting’s unbeaten 54 was his highest score from his last 14 outings and his third-wicket stand of 122 runs with Usman Khawaja rescued Australia from dire straits.

The pair came together after Vernon Philander had struck twice to remove both of the Australian openers with only 19 runs on the board.

Chasing 310, Australia need another 168 runs to level the series, with seven wickets in hand.

Philander hit the target in the first over of the innings when his second delivery straightened from a length on off-stump and clipped Shane Watson’s bails.

Increasing pressure
In his next over, Phillip Hughes (11) had no time to pull away as he edged Philander to Jacques Kallis at second slip.

At 19 for two, the old and the new occupied the crease.

Twenty four year old Usman Khawaja, playing in only his fourth Test, replacing the injured Shaun Marsh at three, was joined by Ponting possibly playing in his last Test match for Australia.

Ponting has served his country well, playing in 156 Test matches and winning more games as captain (48) than any other in the history of Test cricket.

He is third on the list of all-time run-makers with 12 549 Test runs under his belt, including this innings but he was under increasing pressure to score runs after poor run of form in his last 13 outings.

Soft ending
Khawaja reached his first half-century in only his fourth Test, off 95 deliveries, and together they scored freely and ran well between the wickets, Imran Tahir eventually broke the partnership when the ball shaved Khawaja’s bat and veered towards Jacques Kallis at slip.

It was a soft ending for a superb innings from the 24 year-old Pakistan-born player, ironically dismissed by another player of Pakistan origin.

Michael Clarke came out to face one ball to end the over before bad light stopped play.

Earlier, South Africa was bowled out for 339 with Dale Steyn chipping in with 41 runs to keep the tail wagging longer than Australia would have liked.

Hashim Amla scored his 14th Test century, off 222 balls with 14 boundaries, while teenage debutant Pat Cummins returned figures of six for 79 for Australia in only his fourth first class match. — Sapa