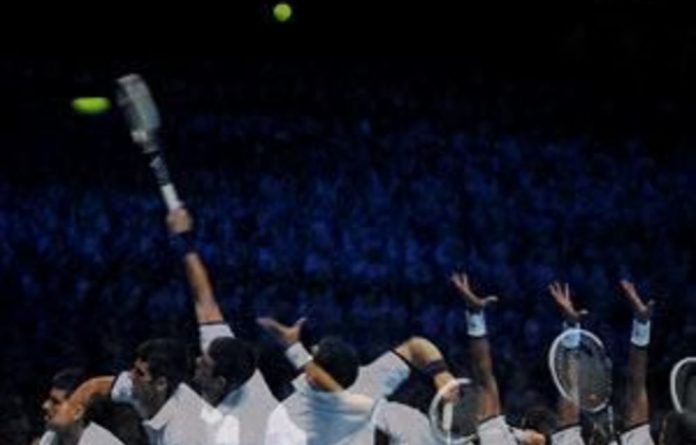 A weary Novak Djokovic finished his spectacular season by losing more matches in three days than he did in the first seven months of the year, earning the top-ranked Serbian an early elimination from the ATP World Tour Finals.

After winning three Grand Slam titles and seizing the No. 1 ranking from Rafael Nadal before having the last few months derailed by injuries, Djokovic had simply run out of energy coming into the season-ending tournament in London.

“What is missing … is that freshness,” Djokovic said after losing 3-6, 6-3, 6-3 to fellow Serb Janko Tipsarevic in their final group match. “The will to win, just being on the court, giving 100%. I’m not able to do that now because I just have very little left.”

Despite finishing the group stage with a 1-2 record, Djokovic would have reached the last four if Tomas Berdych had lost to David Ferrer in the final round-robin match, but the seventh-seeded Czech rallied from a set and a break down to beat Ferrer 3-6, 7-5, 6-1 to grab the last semifinal spot for himself.

Top three out of finals
The three highest ranked players in the world failed to make it out of the group stage. Second-ranked Rafael Nadal was eliminated after losing to Tsonga on Thursday, while No. 3 Andy Murray pulled out injured following his opening loss to Ferrer.

Djokovic, meanwhile, can start packing his bag for the Maldives, where he plans to join Tipsarevic for a vacation next week as he tries to recharge for next year.

“I look forward to go for a much needed rest,” he said. “I had an unbelievable year. Nothing can really ruin that. I will always remember this year as the best of my life.”

Still, it was a disappointing end to one of the greatest seasons men’s tennis has ever seen.

Djokovic went undefeated in 41 matches in 2011 until losing to Federer in the French Open semifinals. His next loss didn’t come until he had to retire with an injury against Murray in the final of the Cincinnati Masters in August. In between, he beat Nadal for his first Wimbledon title, and he again defeated the Spaniard in the US Open final.

Worst defeat
But he hurt his back in that final and had to retire from a decisive singles match in Serbia’s Davis Cup semifinal against Argentina’s Juan Martin del Potro the next weekend, leading to a six-week injury layoff.

In his return in Basel, he lost to Kei Nishikori of Japan in the semifinals, and then withdrew before his quarterfinal against Tsonga in Paris.

In all, he won 10 tournaments and came into London with a 69-4 record.

But after beating Berdych in three sets in his first match, he lost 6-3, 6-1 to Ferrer on Wednesday, which tied for the worst defeat for a No. 1-ranked player since 1983.

Against Tipsarevic, Djokovic showed flashes of the spectacular shot making that made him practically unbeatable earlier in the year, but he was broken twice in each of the last two sets, and sent a forehand into the net on Tipsarevic’s third match point.

Better than match against Ferrer
“I lost a match that I think I was on the way to win,” Djokovic said. “But if this is my last match in the Masters Cup, I’ll be happy because I think, at least comparing to the match against Ferrer; I played a little bit better.”

Tipsarevic entered the tournament as an alternate after Murray pulled out and had no chance of advancing after losing his first match to Berdych — but still managed to earn his first win in four meetings against his fellow Serb.

“Not trying to undermine my performance or my victory today, [but] I can freely say that this was not Novak Djokovic from the US Open or Wimbledon,” Tipsarevic said. “Which is, in a way, normal. He won everything a person can win. He had the best season, if I’m not mistaken, in the history of this sport.”

Djokovic’s season looked set to continue when Ferrer took control of the match against Berdych, twice going up a break in the second set. But the Czech broke back immediately both times, before breaking for a third time when the Spaniard sent a backhand long on set point.

Ferrer, who had already qualified for the semis by winning his first two matches, then offered little resistance in the third, as Berdych raced out to a 5-0 lead before clinching the victory with a forehand volley.

“When I [won] the second set, it just gives me a lot of confidence, energy,” Berdych said. “I started to feel really great on court.” — Sapa-AP