And Zanu-PF’s candidate is – 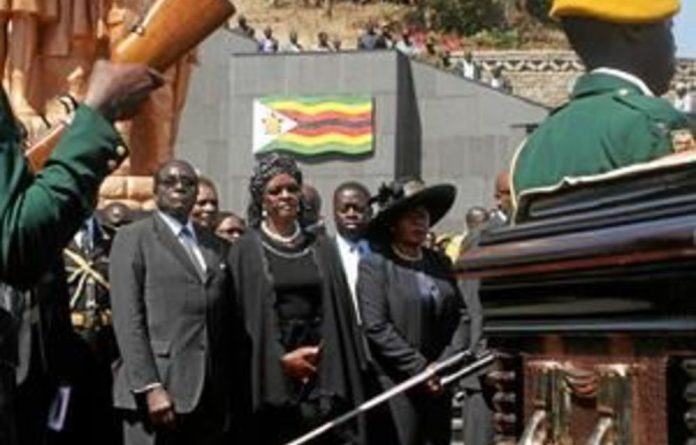 Although Zimbabwean President Robert Mugabe’s grip on power at the Zanu-PF people’s conference in Bulawayo next week is a foregone conclusion uncertainty continues to grow in the party about who will succeed the 87-year-old strongman.

The conference marks the twilight of Mugabe’s political career and speculation about his failing health and doubts about him finishing another five-year presidential term are mounting.

Ahead of the conference, to be held under the theme “Defending national sovereignty, consolidating indigenisation and economic empowerment”, seven of the party’s 10 provinces have already stepped forward to endorse Mugabe as their candidate in elections mooted for next March. The remaining provinces are expected to follow suit before the December 10 conference begins.

But analysts have warned that the “stampede” to endorse Mugabe must not be mistaken for unity within the party as, unlike at previous conferences, Zanu-PF is hamstrung by a range of problems. These include WikiLeaks exposés of members of Zanu-PF’s top brass in secret talks with American envoys; Pretoria’s tough stance on Harare, which is perceived to signal the growing impatience of the Southern African Development Community (SADC) with Zanu-PF’s belligerence; and the contentious Zanu-PF succession race.

A senior political analyst with the International Crisis Group, who did not want to be named, said: “Zanu-PF is shooting itself in the foot by pressing for early elections at a time when it is clear that the party is preoccupied with internal troubles and is ill-prepared for elections. This is what happens when desperation sinks in.”

Speaking about the succession debate this week, Didymus Mutasa, the Zanu-PF secretary for administration, said: “Who is succeeding who? There is nothing like that. We have said it again and again, but you just won’t listen. New leaders are elected at congress. This is not a congress.”

Party leaders are elected at Zanu-PF congresses, which are held every five years. The next is set for 2014.

But in September, Mugabe said that the conference “was just as good as a congress” and described it as “crucial”, paving the way for speculation about the implications of the conference for the party’s future.

Pitting Mujuru against Mnangagwa
Constitutionally, the deputy president, Joyce Mujuru, would take over from Mugabe should he die in office or become incapacitated, and would call for elections within 90 days.

But with Zanu-PF’s rival factions pitting Mujuru against Emmerson Mnangagwa, the country’s defence minister, who heads a faction of hardliners, her ability to secure a unanimous endorsement as party leader in elections is in doubt.

Mnangagwa enjoys the support of political turncoat Jonathan Moyo, sections of the military elite and party stalwarts Mutasa, Simon Khaya-Moyo, Patrick Chinamasa and Rugare Gumbo, all known to have resisted Mujuru’s rise to the post of deputy president in 2004. Although Mnangagwa has scoffed at reports that he is a frontrunner to succeed Mugabe and said he is “only number 12” in Zanu-PF’s hierarchy, his manoeuvring within the party suggests otherwise.

This year, Mnangagwa has been at the forefront of pushing a pro-Mugabe agenda. He acted as Mugabe’s chief emissary in courting favour with SADC leaders in June at a time when hostility against Zanu-PF was increasing. Also, as defence minister, he warned Zimbabweans of a “severe backlash” if they attempted to stage North African-style riots to topple Mugabe. Unlike his rival Mujuru he has now publicly backed Mugabe’s bid to stand in next year’s polls, saying: “Mugabe is a leader with a clear vision. He knows all our concerns and has the solution.”

Effie Ncube, a political analyst, said: “There is no doubt that Mnangagwa will come out stronger at this conference. He has become Mugabe’s golden boy.”

By contrast, Mujuru and her faction of moderates are walking a tightrope at this year’s Zanu-PF conference, following the death of her husband and “kingmaker”, General Solomon Mujuru, in a mysterious house fire in August.

Joyce Mujuru has been caught up in demanding answers to her husband’s mysterious death rather than openly voicing support for Mugabe. A further setback for the Mujuru faction has been the exposés by WikiLeaks linking several of the faction’s figures to secret meetings with American envoys, prompting calls by party hardliners for a crackdown against the “sell-outs”.
Meanwhile, on the agenda at the Zanu-PF conference will be the indigenisation programme spearheaded by Youth Development, Indigenisation and Empowerment Minister Saviour Kasukuwere.

Kasukuwere is due to make a presentation on indigenisation to the 6 000 Zanu-PF delegates.

The programme is certain to be the centrepiece of Zanu-PF’s election campaign. It has gathered steam since October, following the roll-out out of community share-ownership-trust schemes targeting Zimplats, the subsidiary of the South African Implats, and Unki Mine owned by Anglo-American.