In chicken we trust 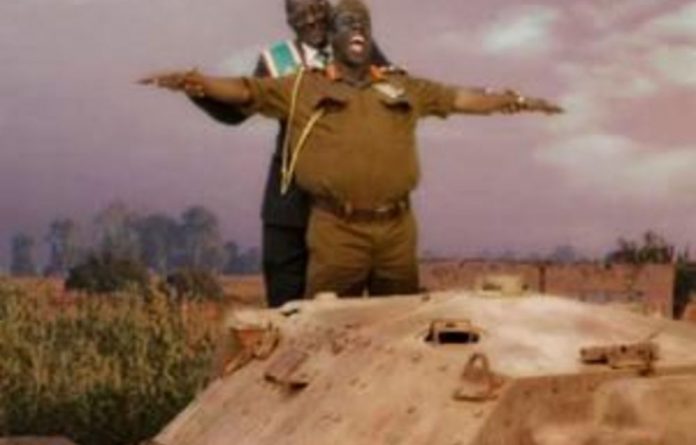 It’s common knowledge that our martyr to African freedom, Beloved Leader of the Pack Muammar “Mad Dog” Gaddafi, had a dream. A dream of a united Africa, with freedom under the sun and hot chicks with guns for all.

But few people realise that he had worked out many of the trappings of this United Africa before his untimely death. The common currency was to be called the afro, and the coat of arms was going to feature a Lear Jet rampant, with the words “Dictator’s Camel” set against a leopard-skin shield representing Gaddafi’s underwear. The national bird, you’ll be unsurprised to hear, was going to be the chicken.

What is it about the mighty chicken that makes it such an emotional and awe-inspiring symbol for we Africans? It’s even on the Zimbabwean flag. Whatever. The latest Nando’s advert taps precisely into that nexus of absurd nostalgia, banal evil and chicken-loving populism that has given us such mighty African leaders as Robert Mugabe, Idi Amin, PW Botha, Gaddafi and, uh, Saddam Hussein and Chairman Mao.

When advertising gets it wrong, well, they just sell more burgers to sexists. When they get it right, however, it represents the best of edge-dwelling creativity, happy inventiveness and co-opting commercialism. The Nando’s television advert, if you haven’t yet seen it, shows a forlorn Mugabe at an empty dictators’ table. He has a flashback to happier days, when he and Gaddafi would have waterpistol fights (Gaddafi wields a gold AK-47, a clever reference to his gold pistol that was waved around by those who killed him), and he and Saddam would make sand angels in the desert.

There are several moments of genius. The implication that PW and Mugabe are cut from the same evil cloth is politically radical, and won’t sit well with many who still feel a misguided need to apologise for Mad Bob.

It won’t just incense dimwitted Africa-first Manichaeans. It’ll also piss off liberals who are determinedly not drawing parallels between current South African government attempts to curtail freedom of expression and the lessons of Zimbabwe post-2002. Ah yes, it used to be the mantra of the racist: “We’ll end up like Zimbabwe.” Now it’s the lament of the liberal.

The childlike pleasure that the dictators take in their watersports and big guns is magnificently portrayed: PW on a swing, Idi and Bob recreating the bow scene from Titanic on a tank, Mao and Bob singing a karaoke duet. To quote Homer Simpson: “It’s funny because it’s true.”

Someone on Twitter called me on my love for this ad, asking how Nando’s can make fun of our respected African leaders who are “a part of our history”. It’s precisely this misguided reverence for authority that the Nando’s ad undermines. Who knew that selling peri-peri chicken would do more to push our polity into thinking critically than a thousand political manifestos?