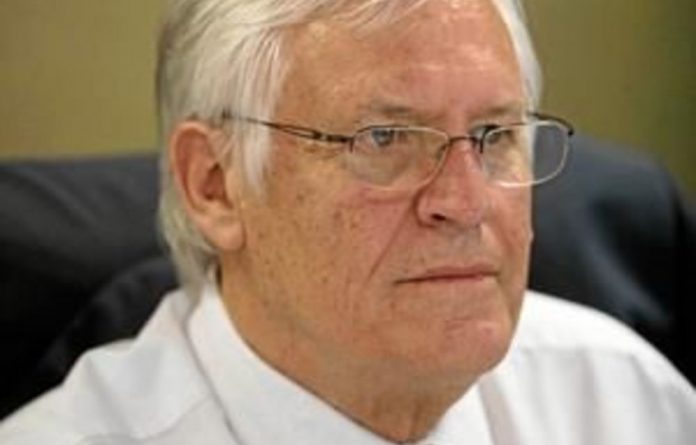 At the end of a gruelling day at the hearings into the affairs of Cricket South Africa (CSA), retired judge Chris Nicholson is sitting near the pool at his Pretoria hotel demonstrating the “famous Nicholson grimace”.

The facial expression is unrelated to the evidence led by CSA officials and the organisation’s attorneys on Wednesday this week — a mixture of padding away questions, pleading innocence and a Michael Atherton-esque obduracy at the crease.

Rather, Nicholson is demonstrating the facial expression that preceded his delivery of off-spinners as a handy cricketer, which resulted in him touring England with a South African Universities team in 1967.

It is a contortion one could imagine the Australian Merv Hughes having seconds before launching one of his infamous farts on the pitch. “With that sort of look, the batsmen were expecting a really good turn and the ball usually just went straight, which is how I got most of my wickets. Batsmen were all playing for the spin that wasn’t there,” said Nicholson, with a touch of self-deprecation.

Captain of the Michaelhouse first team from junior school until he matriculated (with career-best figures — eight for two — at the school), Nicholson would appear the perfect choice to chair Sports Minister Fikile Mbalula’s committee of inquiry into cricket. The 66-year-old has a profound love of the game and recognises that Test matches are “a metaphor for life”.

He was also one of the founders of Aurora Cricket Club, which, in 1973, challenged sports segregation by becoming the first “non-racial” club to be admitted to the all-white Maritzburg Cricket Union. “We thought we could attack the soft underbelly of apartheid, stopping people playing sport together. In our naivety, we thought the whole thing would come tumbling down like a house of cards,” he said of Aurora.

The police monitored Aurora’s matches, recorded the names of the players and spectators present. The formation of the club also led to then sports minister Piet Koornhof altering the provisions of the Group Areas Act to try to stop its participation in the league by issuing Proclamation R228. But legal opinion suggested that the proclamation was vaguely worded and demonstrated an invalid excess of authority.

Nicholson has brought a gentle and gentlemanly sensibility to the CSA proceedings. Humour is also never far away, nor his concern for the most marginalised.

‘Reasonable remuneration’
His line of questioning at the hearings, for which the terms of reference include investigating undisclosed multimillion-rand bonuses paid to CSA staff, including chief executive Gerald Majola, during South Africa’s hosting of the Indian Premier League in 2009, has often veered towards the body’s status as a section 21 company.

Noting that the Companies Act stipulates “reasonable remuneration” for its directors, Nicholson has often wondered during interviews whether these bonuses and the fat profits CSA is currently making would not be better spent in developing cricket in marginalised black communities rather than fattening the purses of administrators who profess to be working “for the love of the game”.

Nicholson, who was born on a farm in Richmond in the KwaZulu-Natal Midlands, has been considered both an activist lawyer and an activist judge. His politicisation, he said, came about when courting his wife, Jillian, as a 19-year-old student.

Said Nicholson: “She was quite a political person and in order to woo her, I went with her to all these student conferences. I remember going to an Anglican Students’ Conference where people like [Methodist theologian] Basil Moore gave a lecture explaining exactly what was wrong with South Africa, from the pass laws to the vote, to everything.

“The scales fell from my eyes. It gave me direction. I decided to study human rights law and labour law. I felt relieved and saw myself as a crusader for justice rather than a commercial lawyer,” he said.

After a two-year stint practising as an advocate in Namibia, Nicholson returned to Durban. When former chief justice (then an advocate) Arthur Chaskalson started up the activist Legal Resources Centre in Johannesburg Nicholson opened up the Durban chapter.

There he employed the likes of another future chief justice, Sandile Ngcobo, and Western Cape Judge President John Hlophe.

An activist judge
The LRC busied itself with labour and detention cases and Nicholson remembers interdicting the state to stop the horrendous torture in detention of the likes of Yunis Shaik, the brother of Schabir.

Defending anti-apartheid activists was dangerous work in the 1980s, with lawyers such as Griffiths Mxenge being assassinated by the state security forces. Nicholson remembers getting death threats on an almost daily basis, especially at the height of the state of emergency in 1986.

He moved to academia at the end of the 1980s, teaching at the then-University of Natal until his appointment to the KwaZulu-Natal Bench in 1995. He also served on the Labour Appeal Court.

“An activist judge,” said Nicholson, “is someone who tries to find a loophole in the law, but doesn’t bend it.”

In one of his most famous judgments, in 2006, Nicholson found the government to be in contempt of court for ignoring a court order to provide antiretrovirals (ARVs) to HIV-infected prisoners in Durban’s Westville prison.

“The wonderful thing about that was that, if government had to provide ARVs to murderers in prisons, then what about good, honest citizens?” said Nicholson.

He is also remembered for his 2008 Pietermaritzburg High Court ruling that found that corruption charges against the then axed deputy president Jacob Zuma were illegal on procedural grounds. Controversially, at a time when Zuma and then president Thabo Mbeki were involved in a bitter power feud, Nicholson also found that there was political interference in the timing of the charges against Zuma.

The decision was overturned in the Supreme Court of Appeal, in a judgment that was highly critical of Nicholson’s ruling, but Mbeki’s recall as president two weeks after the judgment was handed down was attributed to it.

Of the criticism levelled against his ruling, Nicholson said he was “disappointed with the appeals court decision. I respect the court and the appeal process and still think there was political interference. I feel vindicated by subsequent events.”

Nicholson, who retired last year has continued to write books. He is working on a “novelised” investigation of ambidexterity, Darwinism and evil.

Proudly related to Alan Paton (his grandmother and Paton’s mother were sisters), Nicholson’s body of work is eclectic, including an investigation into the assassination of anti-apartheid activist Matthew Goniwe, Permanent Removal: Who Killed The Cradock Four? a biography of golfer Papwa Sewgolum, Papwa the Pariah: Golf in Apartheid’s Shadow and Richard and Adolf: Did Richard Wagner Incite Adolf Hitler to Commit the Holocaust?