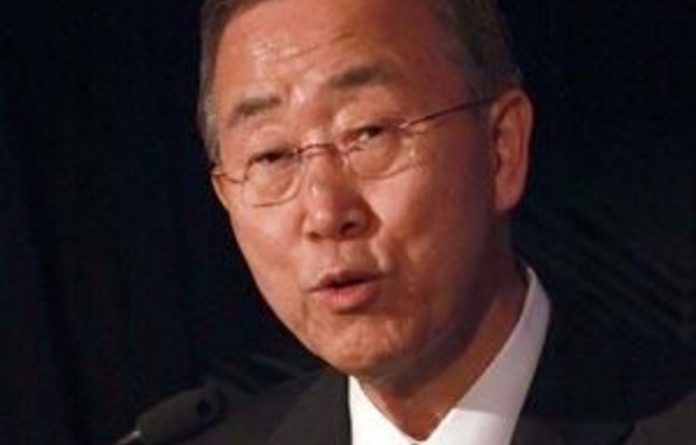 United Nations Secretary-General Ban Ki-moon has called on heads of state to show leadership and resolve any differences they may have on the Green Climate Fund in Durban, so the fund can be launched.

On Wednesday, he implored developed countries to contribute to the Green Climate Fund and fulfil their obligations to the developing world.

“There is still a long way to go towards mobilising the $100-billion by 2020. We’ve entered a time of economic uncertainty, an era of fiscal austerity, but I cannot stress enough how important it is for developing countries to fulfil their obligations,” said Ban.

He added that the UN was “deeply committed” to the initiative so poor countries can access and use the funds.

Countries agreed to set up the Green Climate Fund last year in Cancun. The fund will raise and disburse $100-billion in per year by 2020 to help developing countries cope with the effects of climate change. Because of the amount of money involved, negotiations concerning the fund have been hotly contested. By comparison, the World Bank disburses about $40-billion a year.

Setting up the Green Climate Fund was one of the priorities of the negotiating parties going into COP17. But negotiations on the fund stalled last week when the United States, Saudi Arabia and Venezuela raised concerns with the discussion document being considered. The process got back on track, however, after a series of informal discussions were held.

Momentum has been growing since the high-level segment of the negotiations began this week and insiders say it’s becoming more likely that the fund will be put into operation by the end of the conference. However, it remains to be seen how, exactly, the fund will be filled.

Since the beginning of the conference, NGOs have warned that if developed countries did not make and honour pledges to raise money, the fund would become an “empty shell”. Their fears are based on historical precedent — 10 years ago, the United Nations Framework Convention on Climate Change (UNFCCC) established a fund to finance the most urgent adaptation needs of the least developed countries. To date only $415-million of the $2-billion needed was pledged to help implement adaptation programmes. Many fear that unless innovative and reliable sources of funding are found, the Green Climate Fund will go the same way.

Ban echoed these concerns on Wednesday. “The new fund must not be an empty shell,” he said, adding that although industrialised countries would have to inject sufficient capital, it was not enough to rely on public sources of funding. A combination of public and private sources of funding would be essential. “The scale of resources and the kind of investment requires governments to work together with private sector,” he said.

Innovative sources
Norway’s Prime Minister Jens Stoltenberg, who co-chaired the UN’s high-level climate finance advisory group, echoed this sentiment, saying the debt crisis had underlined the fact that countries should look for funding both from public and private sources. He said it was “challenging but feasible” to mobilise the $100-billion needed but that the key to raising the funds would be to introduce a price on carbon.

It’s been suggested that the price of carbon be pegged at about $25 per tonne. Most of this could be incorporated into the national fiscus while a small percentage is channelled into climate finance.

Stoltenberg said introducing a price on carbon would have a “triple positive effect”. It would encourage people to reduce pollution, contribute to the development of climate friendly and clean technology, and it would generate revenue, which could be used for government purposes as well as for climate action.

Stoltenberg said that in addition to carbon pricing and emissions trading, levies on so-called “bunker fuels,” the carbon-intensive fuels used for shipping and aviation, would also help raise funding.

Multilateralism moving forward
Meanwhile, national planning commissioner Trevor Manuel and also co-chair of the advisory committee, also called for carbon to be priced. “Carbon must be priced, it must be uniform and it must be adhered to.”

He called the existence of high levels of greenhouse gases a “market failure,”

“When you use resources like water and you don’t price it in the equation, it’s indicative of market failure,” said Manuel. “It’s for that reason this must be corrected.”

South Africa has advanced plans to implement a carbon tax, and some say the implementation could happen as early as next year.

Manuel also called for countries to honour the tenet of multilateralism when considering innovative sources of finance to raise the funds needed by the Green Climate Fund. He said multilateralism was important for global climate finance as taxes that would be imposed in one place, would be allocated in another place, through mechanisms such as the Green Climate Fund.

He expressed reservations about the EU’s decision to place a tax on all airlines flying in and out of Europe in a bid to reduce aviation emissions because it had been implemented in a unilateral way and because it made it difficult to exempt poor countries.

He warned that if multilateralism was not respected, countries could end up with another Kyoto Protocol, “which allows countries to opt out if they don’t like the rule”.