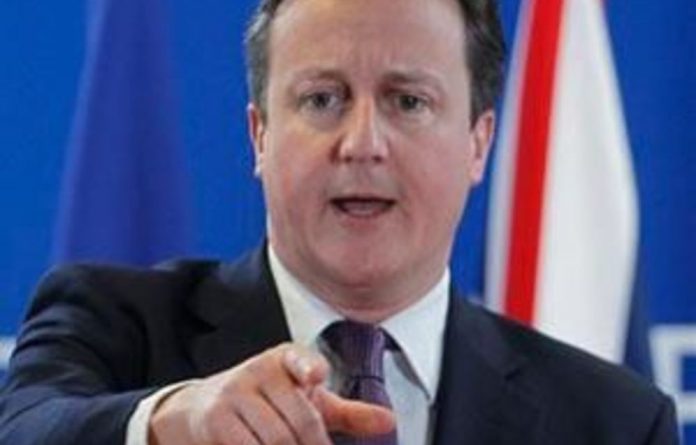 Working almost to exhaustion and persuading countries one by one, European leaders agreed on Friday to redefine their continent — hoping that by joining their fiscal fortunes they might stop a crippling debt crisis, save the euro currency and prevent worldwide economic chaos.

Only one country said no: Britain. It will risk isolation while the rest of the continent plots its future.

The coalition came together in a marathon negotiating session among the 27 European Union heads of government — hard bargaining that began with dinner Thursday evening and ended after 4am, when red-eyed officials appeared before weary journalists to explain their proposed treaty.

It was a major step forward in the long, postwar march toward European integration. It was two decades ago, on December 9 and 10 1991, that European negotiators drafted a treaty in Maastricht, Netherlands, to unite their politics, create a central bank and, one day, invent a common currency.

Friday’s agreement — 23 countries are in favor and three more say they are open to the idea — would force countries to submit their budgets for central review and limit the deficits they can run.

The hope is that it will stem a crisis over sovereign debt that consumed Greece, spread to Ireland, Italy, Portugal and Spain, and threatens to explode into a worldwide financial crisis capable of pushing the global economy into recession.

‘Renewal’
“This is the breakthrough to the stability union,” German Chancellor Angela Merkel said. “We are using the crisis as an opportunity for a renewal.”

To prevent excessive deficits, countries in the treaty will have to submit their national budgets to the European Commission, the executive body of the EU, which will have the power to send them back for revision.

They must also bring their budgets close to balance. Except in special circumstances, the budget deficit of a country won’t be able to exceed 0.5% of gross domestic product, the amount of goods and services produced by its economy. An unspecified “automatic correction mechanism” would punish the rule-breakers.

Germany and France insist that fiscal union is the best way to regain market trust, badly shaken by the escalating financial crisis. Most economists think it will not be enough.

They say the euro countries also need enough money to guarantee that they can pay the massive debts that have resulted from running budget deficits year after year. Euro leaders put off until March a decision on whether to provide money on top of a $668-billion bailout fund for euro countries.

European leaders did agree to add €200-billion to the International Monetary Fund to help ailing countries.

Only 17 of the 27 European Union countries use the euro currency, and its stability has been threatened by the massive national debts of some of those 17. All but two of the 10 non-euro countries — Britain and Denmark — are committed to adopting it eventually.

The countries that use the euro found they had friends among those that do not. At least six and as many as nine non-euro countries are willing to bind themselves to the euro countries in a pact aimed at having their economies converge.

Failed exemption
Britain said no for two reasons: Prime Minister David Cameron’s Conservative Party includes a strong anti-EU element, and Cameron, despite trying deep into the night, failed to win an exemption from regulation of the British financial industry.

The other leaders would have none of it: Bankers and lack of regulation are viewed on the continent as a prime cause of the financial crisis.

Britain, which prides itself on its fierce independence, joined the then-European Economic Community in 1973 — only after French President Charles de Gaulle, who had vetoed the UK’s membership along with Germany’s leader, fell from power.

Since then, it has retained a frosty skepticism toward the ambitions of France and Germany to forge ever closer political and fiscal ties. It eschewed both the euro and the Schengen open borders policy, fearful of losing power to determine its own fate.

French President Nicolas Sarkozy blamed the British leader for scuttling what could have been an EU-wide treaty. He said Cameron’s exemptions for British finance “seemed to us unacceptable”.

Some countries may face parliamentary opposition to the pact, which would allow for unprecedented oversight of national budgets.

Stock indexes and the euro climbed on the news of the treaty, even though it will only stop debt from piling up long term and doesn’t solve the immediate debt problem. Stocks rose 3.4% in Italy, 2.5% in France and almost 2% in Germany. In New York, the Dow Jones industrial average rose 1.5% and vaulted back over 12 000.

Borrowing costs for European countries fell, but only slightly, a sign of cautious confidence from the bond market. The yield on the benchmark Italian government bond fell to 6.33%, down about 0.05%. A yield above 7% is considered unsustainable.

Long night
One by one through the long night, the leaders of the 17 euro nations persuaded the non-euro nations to come along.

Hungary, the Czech Republic and Sweden said they would need to consult their Parliaments. The six other EU countries that use currencies other than the euro — Denmark, Poland, Bulgaria, Romania, Latvia, Lithuania — agreed right away.

The Obama administration said Friday’s agreement was progress but that Europe must do more. Presidential spokesperson Jay Carney said the administration is offering advice.

“But in the end, it is a European problem that needs a European solution, and we believe that they need to act conclusively and decisively to resolve it,” Carney said.

Separately, a senior administration official said that the United States won’t contribute to boosting the IMF’s resources. The official spoke on condition of anonymity because of the sensitivity of the matter.

In recent weeks, financial markets had hoped that a deal such as Friday’s would clear the way for the European Central Bank to start buying massive amounts of bonds to lower the borrowing costs of heavily indebted countries.

Those countries need their borrowing rates to stay at reasonable levels for years while their economies begin growing again and they accumulate the tax revenue needed to pay down their debts.

But ECB president Mario Draghi dashed those hopes on Thursday and said there was no plan to buy more bonds. On Friday, Draghi called the treaty agreement “a very good outcome for the euro area, very good.

“It is going to be the basis for much more disciplined economic policy for euro-area members,” he said. “And certainly it is going to be helpful in the present situation.”

A breakup of the euro would have disastrous consequences. It would almost certainly trigger a financial crisis, while banks figured out who owned what and while countries leaving the union awkwardly transitioned back to their own sovereign currencies.

Such a disorderly exit could cause banks to become fearful and stop lending money to each other. In 2008, a credit crisis followed the bankruptcy of Lehman Brothers investment house. Investors panicked and sold stocks wildly, triggering a meltdown in stock markets worldwide. — Sapa-AP