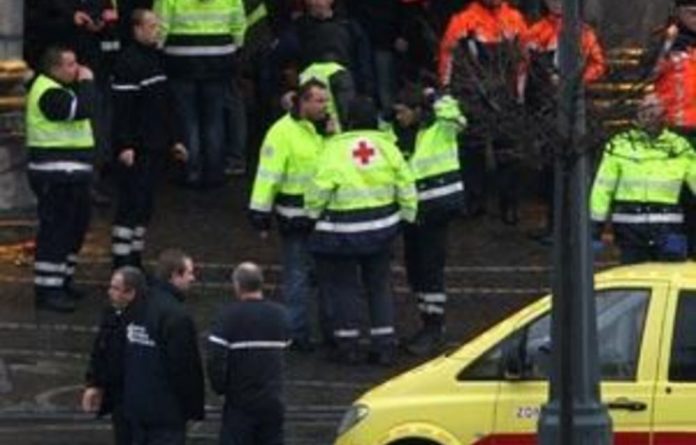 A lone gunman brought carnage to the Belgian city of Liege on Tuesday, spraying bullets at Christmas shoppers and hurling a grenade at people waiting for a bus, killing four people including a girl of 17 months before shooting himself dead.

The attack, in which another 125 people were wounded, paralysed the centre of Belgium’s fifth city, with workers trapped in offices as police sealed off the area, helicopters circled, and ambulances poured in from as far away as the Netherlands.

The man’s motive was unclear but Belgian officials said there was no indication it was an act of terrorism.

Witnesses said 33-year-old Nordine Amrani had begun his rampage at about 12.30pm near a bus stop at Place Saint Lambert, site of Liege’s bustling Christmas market and its main courthouse. Shoppers scattered to flee the bullets.

Gaspard Grosjean, a journalist for a local newspaper, was in the square moments after the attack.

‘People are crying’
“We saw people with bullet wounds in their shoulders, their hands,” he said, adding that he had seen one body.

“I see people completely scared, people are crying, everyone is on their phones.”

Amrani was freed from jail about a year ago after a conviction for possessing weapons and drug offences.

Justice officials said Amrani had been summoned to answer police questions that morning on an undisclosed matter, but never turned up.

One witness told RTBF radio: “He had a bag. He got a grenade out of his bag. He threw the grenade at the bus stop.

“Then he had a Kalashnikov [rifle]. He shot in all directions. Then everyone ran to try to save themselves. Then he got a revolver out and put a bullet in his head.”

Toddler killed
Police said the dead were two boys of 15 and 17, a 75-year-old woman, and a toddler of just 17 months whom hospital doctors fought for hours to save.

Liege’s mayor, Willy Demeyer, said the two boys had been taking school exams nearby just before the attack.

By evening, Place Saint Lambert, whose Christmas market of around 200 stalls attracts over 1.5-million visitors each year, was still sealed off, covered with shattered glass and pools of blood, and there was still no indication of Amrani’s motive.

At his most recent address, an apartment block near the scene of the attack, Johan Buron said he had been astonished to learn what his neighbour had done.

“He was calm, every time I met him in the corridor he was very friendly and said ‘hi’,” he said. “If my memory serves me right, he was a welder.”

A spokesperson for Belgium’s crisis response centre also said there was no indication that it had been a terrorist attack. It was not clear whether Amrani was Belgian.

Prosecutor Cedric Visart de Bocarme told Belgian television that Amrani had been in jail several times since his youth, and said that police searching his home had not found any further weapons or suspicious items.

Random killings are rare in Belgium. Most recently, in January 2009, a man stabbed two infants and a woman to death and injured 13 at a nursery in the town of Dendermonde. — Reuters

The bulk of the Reserve Bank’s shareholders are individuals,but include trusts, pension funds, unions, a library, and an archbishop
Read more
Sport

In a tournament full of surprises, Gareth Southgate's young England team are the only former champions left in the lower half of the draw
Read more
Sport

Instead of facing Brazil in a mouth-watering quarter-final in Kazan on Friday, Japan are heading home while Belgium march on
Read more
Sport