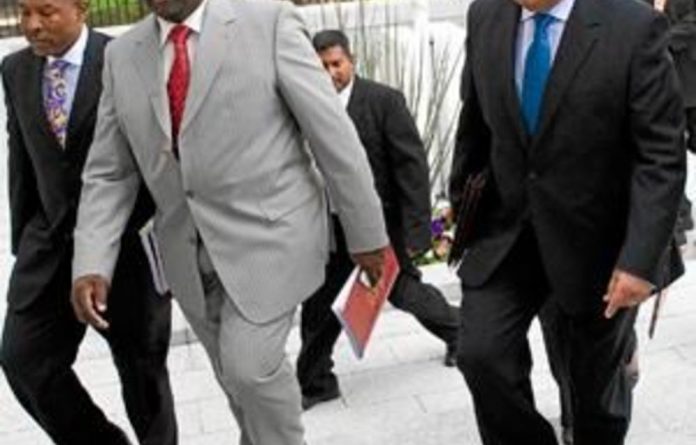 A political revolt has broken out in the national treasury, with senior officials rebelling this week against Finance Minister Pravin Gordhan following his controversial decision to place Limpopo under administration.

The Mail & Guardian has learned from several treasury insiders that senior officials — including Kenneth Brown, the deputy director general responsible for provinces — disagreed with Gordhan’s decision to intervene in Limpopo’s cash crisis, exposing deep divisions in the department.

The suggestion is that the treasury, one of the most widely respected in the world for fiscal policies and ranked number one in global studies for budget transparency, is starting to unravel at the seams, with politics interfering with policymaking.

The drama unfolded after a treasury employee sent a damning email to the M&G outlining the political skulduggery surrounding the decision to place Limpopo under administration.

The email — sent from a Gmail account that belongs to Brown’s personal assistant, Rakgadi Motseto, at 7.41pm on Sunday — triggered a red alert on the treasury’s IT system. This prompted a witch-hunt for the culprit while director general Lungisa Fuzile claimed Motseto’s email account had been hacked. Motseto refused to comment, but treasury spokesperson Bulelwa Boqwana told the M&G that the email was sent by a department official using Motseto’s account. She said the matter was being investigated by the department’s IT intelligence unit.

The M&G has heard that Brown has gone on leave until January. His colleagues said they found it absurd that Brown, as a senior head, would be on leave at a crucial time when the department was in the middle of preparing for the budget in February. Similarly, a day after confirming the investigation, Boqwana said she could not answer any further questions because she was also on leave.

Approached for comment on Tuesday night, Fuzile said he was on leave too, but contradicted the fact that the email was sent by a treasury employee and an investigation was taking place.

“It would be unfair to peddle speculation under the guise of faceless individuals. No, there are no divisions among senior officials,” he said.

He also threatened to cut off the M&G from all treasury communication if it printed this story.

“Go ahead. I can’t stop you. But when there is a real story we will talk to your competitors instead. We can’t allow you to publish stuff that is nonsensical. This runs the risk of deflecting us from real issues.”

Gordhan pressured
The issue raised is that Gordhan, under pressure from his political bosses, targeted Limpopo, which had asked the treasury to increase its credit line from R700-million to R1.7-billion because it could not pay wages and its suppliers.

Officials objected to Gordhan’s decision to impose a section 100 order under the Constitution to place Limpopo under administration, highlighting that it appeared a ­political agenda was at play, especially because the province is regarded as a prime ANC Youth League territory.

According to the email sent to the M&G, Gordhan then threw two other provinces into the mix.

“After resistance from his executive, Gordhan had to include the FS [Free State] and Gauteng in the memo. The officials were refusing [to allow] him to use the treasury for political battles,” stated the email.

“It is a lie that Limpopo is not singled out. Gordhan has known about the challenges in the Free State and Gauteng for two years and did­ ­nothing. Why now? The request for help from provincial treasuries was never endorsed by the two provincial executives and wasn’t by Monday 5 [December].”

This should not detract from the fact that Limpopo had managed its finances poorly, said a senior ­government official, and the treasury had previously taken over the ­administration of other provinces, such as the Eastern Cape in 1998.

Unhappy officials
The email claimed that Limpopo’s problems arose because of infighting between the province’s treasury head and the deputy director general of sustainable resources.

“This could have been fixed in two months. If Limpopo is not targeted, why send a team there and not to other provinces? Gordhan is eroding every principle that the treasury stood for. The officials are unhappy and demotivated.”

Senior Limpopo government ­officials complained this week that Gordhan and other Cabinet ­ministers were unable to present a diagnostic report during a tense meeting with provincial leaders last week.

The provincial leaders claimed that the treasury was asking for details only now, when it could have gathered intelligence before placing the province under administration.

Fractured department
The M&G has written previously about cracks and deep discontent in the treasury. Although Gordhan has been praised for taking a tough line on corruption and fiscal responsibility in the face of balancing political and budgetary expectations and growth concerns, some in the ­treasury feel he spends too much time managing Cabinet and alliance ­politics, instead of occupying the contested high ground of policy.

“The department is a more fractured environment than previously,” said a senior official.

Officials would rather see him clearing political space for more structural reform programmes. Some claim he treats the economic debate as though it was an outgrowth of the apartheid-era Operation Vula, in which he played a key role, managing relationships, keeping secrets and smuggling weapons. Others in government argue he has little choice and needs all the covert skills he acquired in Vula to prevent a full-scale assault on the fiscus by looters, economic populists and even his left-leaning Cabinet colleagues.

Political decision
Gordhan’s decision, according to one senior treasury official, was not collective and sparked anger and frustration. “Most managers complained bitterly that it put the integrity of the treasury at stake and that it exposed the department to accusations of meddling in partisan politics.”

“Is treasury being used for political agendas? Yes. Did politics play a role in the decision to intervene in these provinces? Yes. Indeed, the department has become a battleground ahead of the ANC’s Mangaung conference and we are unhappy with this development. We don’t want the department to become another state security [apparatus] where resources are used to settle political scores. We should be neutral.”

Staff exodus
This year the treasury has lost some of its best brains, such as globally respected director general Lesetja Kganyago, who went to the Reserve Bank, and head of budget Kuben Naidoo, who went to the National Planning Commission. The M&G understands that Kganyago was forced to quit before his contract expired because he clashed with Gordhan on policy issues.

Several insiders told the M&G this week that the division in the treasury was a result of Gordhan’s micro-management leadership style as well as his lack of political clout. “The recent exodus of staff at treasury is mainly related to his leadership style,” said a director. “There is a lot of unhappiness with him. Most have gone to economic development, or the National Planning Commission to join Trevor [Manuel], but some have left for the private sector.”

He said Gordhan and most senior managers were at loggerheads about the role of the treasury. “We are responsible for the country’s fiscal policy and drawing up budgets and should not interfere in the affairs of provinces for political reasons. Our department is under siege.”

During the run-up to the watershed ANC conference in Polokwane, the treasury, then under Manuel, came under fire from ANC members for being “too powerful”, with Cosatu and the South African Communist Party lobbying for the department to be cut down to size.

A former treasury official who still has a hand on the pulse in the department said: “Pravin is a lot more consultative with staff compared to Trevor, but he doesn’t have as much political clout. He [Pravin] is also frustrated by not being on the [ANC’s] national executive committee, so he doesn’t have his hands on the party policy machine like Trevor did. This interferes with policymaking decisions and has created a lot of unhappiness in the department.”

A provincial treasury official said Manuel had run the “treasury professionally and distanced it from party politics” and that was why he had been re-elected to the NEC. “Pravin is bringing treasury into disrepute. By the time [President Jacob] Zuma leaves government, all these [government] institutions will be a mess.”

Another senior treasury official said: “The department used to be a place where technocrats and intellectuals were given space to do what we do best: crafting the best fiscal policies for the country. We just want to be able to do our jobs and not be influenced by the politics between the minister, his party and the president, who he is close to.”