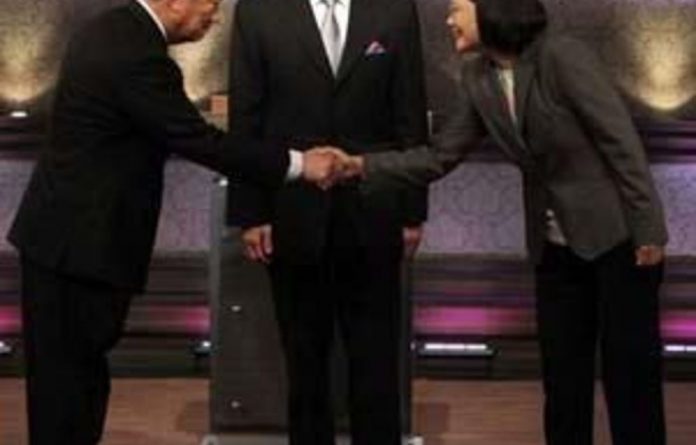 Candidates for Taiwan’s presidential election kicked off their campaigns with a televised debate on Saturday, a month before a poll that will decide whether Taiwan deepens its integration with China or embarks on a period of more tense relations.

China, which regards Taiwan as a renegade province, has made no secret of its preference for President Ma Ying-Jeou, who is seeking a second term at the head of his Nationalist Party after bringing closer economic ties with the mainland since 2008.

The January 14 poll is seen as a referendum on those policies and a victory by his opponents, especially the Democratic Progressive Party (DPP), which could present a thorny diplomatic challenge for China and the United States.

His opponents are DPP leader Tsai Ing-Wen, whose pro-independence party is reviled by Beijing, and People First Party candidate James Soong, a former heavyweight in Ying-Jeou’s party who could emerge as a spoiler who might affect his chances.

In a largely scripted debate that lacked any real fireworks, the three candidates took questions from a range of groups on issues such as the tax system, high house prices and living costs, legal reform and health care.

Ying-Jeou and Ing-Wen are neck-and-neck in opinion polls and almost a third of the electorate is undecided.

Investment in women and youth
Ying-Jeou focused on plans to step up investment on women and younger Taiwanese, including offering housing subsidies, and touted his record of economic gains through his policy of economic rapprochement with China.

The policy has created a stable relationship in one of the world’s potential flashpoints, which Ying-Jeou said was essential for Taiwan’s future.

Beijing hopes his approach will lead to its long-held aim of political unification and has warned that an opposition victory could halt economic progress and destabilise the Taiwan Strait.

TV stations conducting phone-in polls on the candidates’ performances put Ing-Wen, an academic and former top China policy maker in the 2000 to 2008 DPP administration, well ahead of Ying-Jeou on the question of who appeared the most trustworthy.

Accusations flying
Ing-Wen’s campaign is focused on improving the lot of Taiwan’s less wealthy. Soong, who is casting himself as the voice of those Taiwanese disenchanted with the squabbling of the other parties, rated a distant third.

In the run-up to the campaign, lawsuits and accusations have been flying over issues ranging from property ownership by candidates to funding for a government-staged musical event.

The Nationalists have accused Ing-Wen of putting government money into a biotech firm that she became chairwoman of shortly after leaving office. During the debate, Ing-Wen repeated her denial of the charge, which she says is politically motivated.

“If President Ying-Jeou really had accomplished outstanding administrative achievements and managed to deliver on his campaign promises, the ruling party would not have needed to use this kind of negative campaign strategy to attack me”, she said.

Taiwanese prosecutors are looking into the case, which could potentially lead to corruption charges.

The election will be Taiwan’s fifth since its transition to democracy from a martial law dictatorship. — Reuters