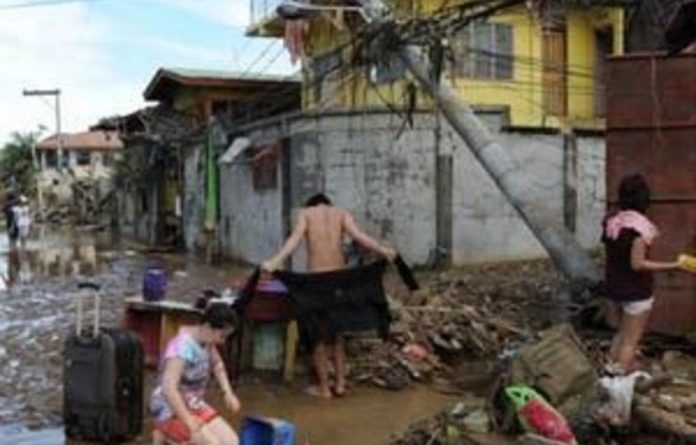 Flash floods have devastated a southern Philippines region unaccustomed to serious storms, killing at least 450 people while they slept, rousting hundreds of others to their rooftops and turning two coastal cities into muddy, debris-filled waterways strewn with overturned vehicles and toppled trees.

With nearly 300 people missing, Defence Secretary Voltaire Gazmin and top military officials were to fly to the worst-hit city of Cagayan de Oro on Sunday to help oversee search-and-rescue efforts and deal with thousands of displaced villagers, as the weather began to clear and floodwaters receded. Among the items urgently needed are coffins and body bags, said Benito Ramos, who heads the government’s disaster-response agency.

“It’s overwhelming. We didn’t expect this many dead,” Ramos said.

Army officers reported unidentified bodies piling up in morgues in Cagayan de Oro where electricity was restored in some areas, although the city of more than 500 000 people remained without tap water.

Most of the victims were asleep on Friday night when raging floodwaters cascaded from the mountains after 12 hours of rain from a late-season tropical storm in the southern Mindanao region. The region is unaccustomed to the typhoons that are common elsewhere in the archipelago.

Ayi Hernandez, a former congressman, said he and his family were resting in their home when they heard a loud “swooshing sound” and water quickly rose ankle-deep inside. He decided to evacuate to a neighbour’s two-story house.

“It was a good thing because in less than an hour the water rose to about 3 metres,” filling his home up to the ceiling, he said.

Deaths expected to rise
At least 450 people were killed in the floods, Philippine Red Cross secretary general Gwen Pang and other officials said. At least 229 died in Cagayan de Oro and 144 in nearby Iligan, which has more than 300 000 residents. The rest died in several other southern and central provinces, Pang said.

Many of the bodies were unclaimed after nearly 24 hours, suggesting that entire families had died, she said.

The Office of Civil Defence said 274 people were missing but Ramos said the number would likely rise as more field reports come in. So far, 437 people have been rescued.

Cagayan de Oro and Iligan were filled with scenes of destruction and desperation.

A swollen river sent floodwaters gushing through neighbourhoods that do not usually experience flooding. A man floated in an inner tube in muddy water littered with plastic buckets, pieces of wood and other debris. Ten people in one home stood on a sloping roof, waiting for rescuers even as water still flooded the lower floors.

Local television footage showed muddy water rushing in the streets, sweeping away all sorts of debris. Thick layers of mud coated streets where the waters had subsided. One car was thrown over a concrete fence and others were crushed and piled in a flooded canal.

Swept to sea
Ramos attributed the high casualties in Mindanao “partly to the complacency of people because they are not in the usual path of storms” despite four days of warnings by officials that one was approaching.

Thousands of soldiers backed up by hundreds of local police, reservists, coastguard officers and civilian volunteers were mobilised for rescue efforts but they were hampered by the flooded-out roads and lack of electricity.

The missing included prominent Filipino radio broadcaster Enie Alsonado, who was swept away while trying to save his neighbours, Iligan Mayor Lawrence Cruz said.

Authorities recovered bodies from the mud after the water subsided. Parts of concrete walls and roofs, toppled vehicles and other debris littered the streets.

Rescuers in boats rushed offshore to save people swept out to sea. In Misamis Oriental province, 60 people were plucked from the ocean off El Salvador city, about 10km northwest of Cagayan de Oro, said disaster official Teddy Sabuga-a.

Cruz said the Philippine coast guard and other rescuers were scouring the waters off Iligan for survivors or bodies that may have been swept away to sea.

Once every 12 years
In just 12 hours, Tropical Storm Washi dumped more than a month of average rains on Mindanao. The storm hit the western province of Palawan on Sunday and was expected to blow out of the country into the South China Sea later in the day.

Forecaster Leny Ruiz said records show that storms that follow the same path as Washi come only once in about every 12 years.

Palawan officials said mobilised emergency crews were on standby as the storm approached.

US Secretary of State Hillary Rodham Clinton said in a statement that the Obama administration offered its “deepest condolences” for the devastation in the southern Philippines.

“The US government stands ready to assist Philippine authorities as they respond to this tragedy,” the statement said. “Our thoughts and prayers are with all of those affected.”