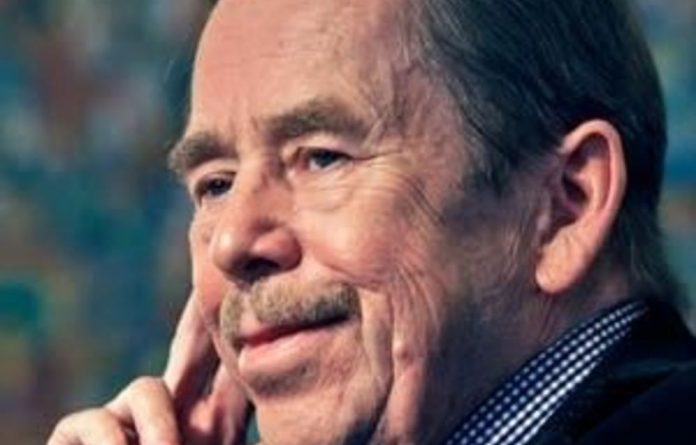 Vaclav Havel, the dissident playwright who wove theatre into politics to peacefully bring down communism in Czechoslovakia and become a hero of the epic struggle that ended the Cold War, has died at the age of 75.

Havel died on Sunday morning at his weekend house in the northern Czech Republic, his assistant Sabina Dancecova said.

Havel was his country’s first democratically elected president after the nonviolent “Velvet Revolution” that ended four decades of repression by a regime he ridiculed as “Absurdistan”.

As president, he oversaw the country’s bumpy transition to democracy and a free-market economy, as well its peaceful 1993 breakup into the Czech Republic and Slovakia.

Even out of office, the diminutive Czech remained a world figure. He was part of the “new Europe” — in the coinage of then-US defence secretary Donald Rumsfeld — of ex-communist countries that stood up for the US when the democracies of “old Europe” opposed the 2003 Iraq invasion.

Havel left office in 2003, 10 years after Czechoslovakia broke up and just months before both nations joined the European Union. He was credited with laying the groundwork that brought his Czech Republic into the 27-nation bloc, and was president when it joined Nato in 1999.

Shy and bookish, with a wispy moustache and unkempt hair, Havel came to symbolise the power of the people to peacefully overcome totalitarian rule.

“Truth and love must prevail over lies and hatred,” Havel famously said. It became his revolutionary motto, which he said he always strove to live by.

Havel was nominated several times for the Nobel Peace Prize, and collected dozens of other accolades worldwide for his efforts as a global ambassador of conscience, defending the downtrodden from Darfur to Burma.

Flower-child past
Among his many honours were Sweden’s prestigious Olof Palme Prize and the Presidential Medal of Freedom, the highest US civilian award, bestowed on him by President George W Bush for being “one of liberty’s great heroes”.

An avowed peacenik whose heroes included rockers such as Frank Zappa, he never quite shed his flower-child past and often signed his name with a small heart as a flourish.

Havel also said he saw the global economic crisis as a warning not to abandon basic human values in the scramble to prosper.

Playwright
“It’s a warning against the idea that we understand the world, that we know how everything works,” he said.

Havel first made a name for himself after the 1968 Soviet-led invasion that crushed the Prague Spring reforms of Alexander Dubcek and other liberally minded communists in what was then Czechoslovakia.

Havel’s plays were banned as hard-liners installed by Moscow snuffed out every whiff of rebellion. But he continued to write, producing a series of underground essays that stand with the work of Soviet dissident Andrei Sakharov as the most incisive and eloquent analyses of what communism did to society and the individual.

One of his best-known essays, The Power and the Powerless written in 1978, borrowed slyly from the immortal opening line of the mid-19th century Communist Manifesto, writing: “A [spectre] is haunting eastern Europe: the [spectre] of what in the West is called ‘dissent.'”

In the essay, he dissected what he called the “dictatorship of ritual” — the ossified Soviet bloc system under Leonid Brezhnev — and imagined what happens when an ordinary greengrocer stops displaying communist slogans and begins “living in truth”, rediscovering “his suppressed identity and dignity”.

Born October 5 1936 in Prague, the child of a wealthy family which lost extensive property to communist nationalisation in 1948, Havel was denied a formal education, eventually earning a degree at night school and starting out in theatre as a stagehand.

His political activism began in earnest in January 1977, when he co-authored the human rights manifesto Charter 77, and the cause drew widening attention in the West.

Havel was detained countless times and spent four years in communist jails. His letters from prison to his wife became one of his best-known works. “Letters to Olga” blended deep philosophy with a stream of stern advice to the spouse he saw as his mentor and best friend, and who tolerated his reputed philandering and other foibles.

The events of August 1988 — the 20th anniversary of the Warsaw Pact invasion — first suggested that Havel and his friends might one day replace the faceless apparatchiks who jailed them.

Pressure for change
Thousands of mostly young people marched through central Prague, yelling Havel’s name and that of the playwright’s hero, Tomas Garrigue Masaryk, the philosopher who was Czechoslovakia’s first president after it was founded in 1918.

Havel’s arrest in January 1989 at another street protest and his subsequent trial generated anger at home and abroad. Pressure for change was so strong that the communists released him again in May.

That fall, communism began to collapse across Eastern Europe, and in November the Berlin Wall fell. Eight days later, communist police brutally broke up a demonstration by thousands of Prague students.

It was the signal that Havel and his country had awaited. Within 48 hours, a broad new opposition movement was founded, and a day later, hundreds of thousands of Czechs and Slovaks took to the streets.

In three heady weeks, communist rule was broken. Mick Jagger and the Rolling Stones arrived just as the Soviet army was leaving. Posters in Prague proclaimed: “The tanks are rolling out — the Stones are rolling in.”

President
On December 29 1989, Havel was elected Czechoslovakia’s president by the country’s still-communist parliament. Three days later, he told the nation in a televised new year’s address: “Out of gifted and sovereign people, the regime made us little screws in a monstrously big, rattling and stinking machine.”

Although he continued to be regarded a moral voice as he decried the shortcomings of his society under democracy, he eventually bent to the dictates of convention and power. His watchwords — “what the heart thinks, the tongue speaks” — had to be modified for day-to-day politics.

In July 1992, it became clear that the Czechoslovak federation was heading for a split. Considering it a personal failure, Havel resigned as president.

But he remained popular and was elected president of the new Czech Republic uncontested.

Image suffered
He was small, but his presence and wit could fill a room. Even late in life, he retained a certain impishness and boyish grin, shifting easily from philosophy to jokes or plain old Prague gossip.

In December 1996, just 11 months after his first wife, Olga Havlova, died of cancer, he lost a third of his right lung during surgery to remove a 15-millimetre malignant tumour.

He gave up smoking and married Dagmar Veskrnova, a dashing actress almost 20 years his junior.

Holding a post of immense prestige but little power, Havel’s image suffered in the latter years as his people discovered the difficulties of transforming their society in the post-communist era.

His attempts to reconcile rival politicians were considered by many as unconstitutional intrusions, and his pleas for political leaders to build a “civic society” based on respect, tolerance and individual responsibility went largely unanswered.

Havel himself acknowledged that his handling of domestic issues never matched his flair for foreign affairs. But when the Czech Republic joined Nato in March 1999 and the European Union in May 2004, his dreams came true.

“I can’t stop rejoicing that I live in this time and can participate in it,” Havel exulted.

Early in 2008, Havel returned to his first love: the stage. He published a new play, Leaving, about the struggles of a leader on his way out of office, and the work gained critical acclaim.

Theatre, he said, was once again his major interest.

“My return to the stage was not easy”, he said. “It’s not a common thing for someone to be involved in theatre, become a president, and then go back”. — Sapa-AP