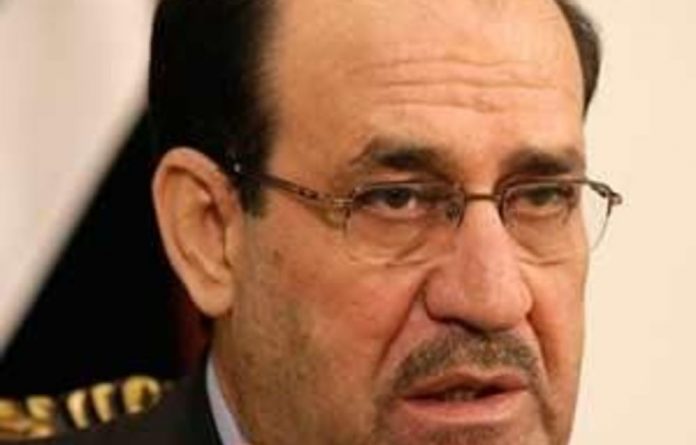 Iraqi Prime Minister Nuri al-Maliki called on lawmakers on Sunday to withdraw confidence from one of his deputies, as the country’s political crisis deepened as US forces completed their withdrawal.

Maliki’s push for the ouster of Saleh al-Mutlak, a Sunni Arab who described him on television as “worse than Saddam Hussein”, came a day after the deputy prime minister’s Iraqiya bloc said it was boycotting parliament in protest at the premier’s alleged centralisation of power.

The latest moves come with the US military having completed its withdrawal from Iraq on Sunday morning, nearly nine years after the 2003 invasion that ousted Hussein from power.

“The prime minister sent an official letter to parliament, asking it to withdraw its confidence in Saleh al-Mutlak after his recent statements,” Ali Mussawi, media advisor to al-Maliki, said.

Arrest warrant issued
Al-Mutlak, who had been accused of being a supporter of the outlawed Baath party in the run-up to March 2010 elections that he was barred from standing in, said on Tuesday that Washington was leaving Iraq “with a dictator”.

And in a separate interview with his own Babiliyah satellite television channel, Mutlak charged: “Maliki is worse than Saddam Hussein, because the latter was a builder, but Maliki has done absolutely nothing”.

Meanwhile, security officials said at least two guards of Vice President Tareq al-Hashemi, also a Sunni Arab and an Iraqiya member, were arrested in connection with a November 28 attack on parliament.

Local Iraqi news outlets reported that an arrest warrant had also been issued for al-Hashemi, but judicial and police officials declined to comment.

On Saturday, Iraqiya, which emerged as the largest bloc in March 2010 elections and has 82 lawmakers in the 325-seat parliament, issued a statement saying it was suspending its participation in parliament to protest what it said was Maliki’s centralisation of decision-making.

Out-manoeuvred
“We can no longer remain silent about the way the state is being administered, as it is plunging the country into the unknown,” it said.

Iraqiya, which garnered most of its support from Iraq’s Sunni Arab minority, was out-manoeuvred for the premiership by Maliki, who, after finishing second in the elections, struck a deal with another grouping to broaden his power base and lead the government.

However, the bloc, which controls nine ministerial posts, has not pulled out of Iraq’s national unity government.

Iraqiya said the government’s actions, which it claimed included stationing tanks and armoured vehicles outside the houses of its leaders in the heavily-fortified Green Zone, “Drives people to want to rid themselves of the strong arm of central power as far as the constitution allows them to”.

Provincial authorities in three Sunni-majority provinces north and west of Baghdad have all moved to take up the option of similar autonomy to that enjoyed by Kurds in north Iraq, drawing an angry response from al-Maliki.

Key political issues such as reform of the mostly state-run economy and a law to regulate and organise the lucrative energy sector also remain unresolved, to say nothing of an explosive territorial dispute between Arabs and Kurds centred on the northern oil hub of Kirkuk. — Sapa-AFP

​Tony Blair has been damned, but is still defending the Iraq war

Mum, imam and Saddam: What young Iraqis are saying with tattoos