Orlando Pirates end on a high 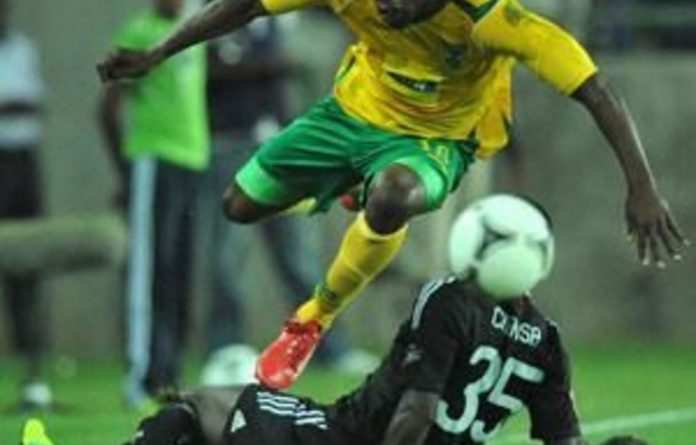 Second-half goals from Isaac Chansa and Tokelo Rantie helped Orlando Pirates end the year on a high after a 2-0 Absa Premiership victory over Golden Arrows in Soweto on Wednesday night.

After a poor opening 45 minutes, Chansa set Orlando Stadium alight just after the hour mark when he headed home a perfectly-lifted cross from Daine Klate.

The Bafana Bafana winger was also the provider of the second goal when his free-kick was turned in, seven minutes from the end, by substitute Rantie.

Victory enabled the defending champions to jump one place to fifth on the table, now ahead of Free State Stars, while Arrows ended 2011 in 12th.

The Buccaneers did most of the early running in the game, although their only real chance early on came in the form of a long-range strike from Klate that went straight to Nkosi Gumede.

At the other end, Thamsanqa Gabuza was causing plenty of trouble on the ball, although most of his touches were in areas of little threat to the home team.

Midway through the half, Oupa Manyisa played a neat one-two with Benni McCarthy down the left but the midfielder struck his shot from a tight angle, eight yards out, straight at the Arrows goalkeeper.

Cynical foul
Thulasizwe Mbuyane then wastefully headed over when Chansa chipped into the box.

Just before the half-hour hour mark, Elrio van Heerden ballooned a shot from the edge of the box, while Lucky Lekgwathi returned the favour with a similar attempt that flew high into the crowd.

A poor first half came to an end with former Arrows old boy Siyabonga Sangweni booked for a cynical foul on Philani Shange.

After the restart, Mbuyane did well to beat his man on the right but his cutback from the left by-line was turned horribly wide from McCarthy.

Manyisa then drew the first real save of the match out of Gumede with a drilled 20-yard shot turned wide by the goalkeeper’s fingertips.

From the resulting corner, Sangweni blazed over as Pirates began the second period strongly.

Gabuza then provided a contender for miss of the season when he misguided the ball wide while unmarked six yards out after a brilliant show of strength from Collins Mbesuma on the right.

Deadlock
Julio Leal’s men eventually broke the deadlock in the 61st minute when Chansa picked up the ball in midfield, exchanged passes with Klate and then continued his run into the box to strongly head home a cross from the Bafana winger.

Arrows tried to find a way back and substitute Jabulani Nene shot over from 18-yards five minutes later, while Siyabonga Nkosi also failed to hit the target from a similar part of the pitch.

Moeneeb Josephs then kept Pirates in front when he clawed the ball out after Dillon Sheppard’s left-footed free-kick from 20 yards out had goal written all over it.

Pirates then dealt Arrows a sucker punch when Klate sent in another pin-point free-kick to the near post, where Rantie managed to steal ahead of the defence and poke the ball home.

Josephs saved well from sub Katlego Mashego and Gabuza close to the end with the home side holding firm for a comfortable win. — Sapa