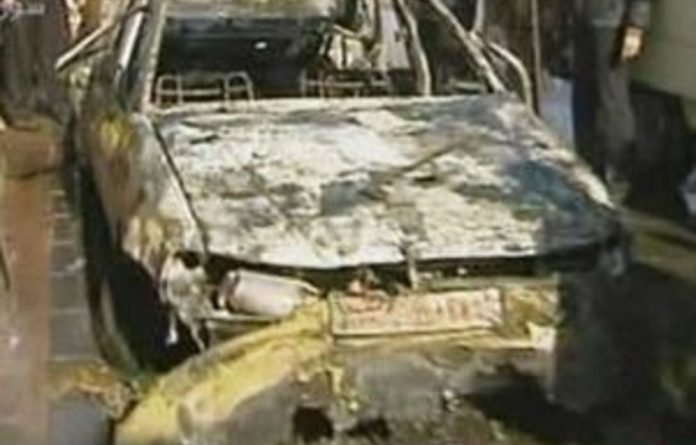 Suicide bombers hit two security service bases in Damascus on Friday killing 30 people and wounding 55 others, state television reported, in the first attacks of their kind in a quarter of a century.

The bombings in the heart of the capital came as an advance team was in the city to prepare the logistics for an Arab League observer mission to oversee a plan to end nine months of unrest that have killed more than 5 000 people, according to a UN toll.

“Several soldiers and a large number of civilians were killed in the two attacks carried out by suicide bombers in vehicles packed with explosives against bases of state security and another branch of the security services,” state television said.

Witnesses said the bombers struck in the Kfar Suseh neighbourhood of Damascus. A car tried to ram its way into a state security compound while another car exploded in front of a security service building in the same area.

Syrian Foreign Minister Walid Muallem has said he expects the Arab observers to vindicate his government’s contention that the unrest is the work of “armed terrorists”, not overwhelmingly peaceful protesters as maintained by Western governments and human rights watchdogs.

‘License to kill’
“Two blasts just rocked the Syrian capital Damascus, followed by the sound of heavy shooting in the vicinity of the general intelligence headquarters,” the Syrian Observatory for Human Rights said in a statement in Nicosia.

The bombings were the first of their kind since the 1980s when then president Hafez al-Assad, father of incumbent Bashar al-Assad, fought an armed uprising by the since banned Muslim Brotherhood.

They overshadowed nationwide protests called by pro-democracy activists for after midday prayers to protest against the Arab observer mission which they fear will stall tougher action against the government over its bloody crackdown on protests.

In a posting on their Facebook page, activists had called on Syrians to rally against a mission they described as a “licence to kill” for the regime.

Opposition leaders have charged that Syria’s agreement to the mission after weeks of prevarication was a mere “ploy” to head off a threat by the Arab League to go to the UN Security Council.

“We call on the Arab League to refer the matter of the crisis in Syria to the UN Security Council,” said Omar Edelbi, spokesperson for the local coordination committees, which have been driving the protests on the ground.

Military withdrawal
He called the observer mission “another attempt by the regime to bypass the Arab initiative and empty it of its contents”.

Even as the advance team arrived there was no let-up in the killing, with activists reporting at least 21 more people dead, and clashes between defectors and troops in the flashpoints of Homs and Idlib.

The observer mission is part of an Arab plan endorsed by Syria on November 2 that also calls for the withdrawal of the military from towns and residential districts, a halt to the violence and the release of detainees.

The advance team consists of a dozen security, legal and administrative staff from the Arab League’s secretariat, who will make the logistical preparations for the arrival on Sunday of an initial 30 observers.

The mission’s leader, veteran Sudanese military intelligence officer General Mohammed Ahmed Mustafa al-Dabi, said its numbers would swell to a total of between 150 and 200 in the following days.

The Enough Project, a non-governmental organisation, on Thursday condemned the fact that the mission is headed by a general it said was in charge of the Sudanese intelligence agency when “genocide” was committed in Darfur.

The opposition Syrian National Council charged on Wednesday that regime forces had killed 250 people in 48 hours in the run-up to the advance team’s arrival.

The Syrian Observatory released a grisly video to back its claim that security forces committed a massacre Tuesday in the town of Kafer Awid in northwestern province of Idlib.

The video zooms in on the faces of at least 49 men, some of them completely disfigured, before panning out to what appear to be rows of corpses. — AFP