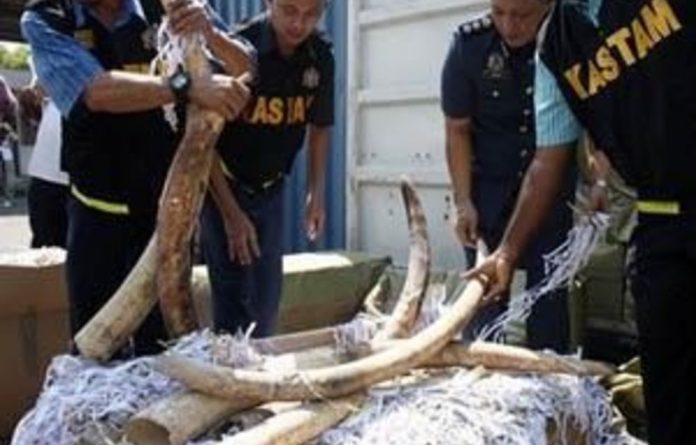 The past 12 months has seen a record number of large ivory seizures across the world, confirming a sharp increase in the illegal trade in recent years, a wildlife watchdog said on Thursday.

Traffic — which runs the ETIS database of illegal ivory trades — said there had been at least 13 large-scale seizures in 2011, totalling at least 23 tonnes of ivory — representing about 2 500 elephants.

This compares to just six large seizures in 2010, weighing a total of just under 10 tonnes.

Most illegal shipments of African elephant ivory end up in either China or Thailand, the watchdog said, with Malaysia the most frequent transit country.

“In 23 years of compiling ivory seizure data for ETIS, this is the worst year ever for large ivory seizures — 2011 has truly been a horrible year for elephants,” said Tom Milliken, Traffic’s elephant expert.

Traffic warned that once the details of hundreds of smaller ivory seizures were collated, “2011 could well prove to be the worst year ever for elephants” since the ETIS database was set up in 1989.

The elephant trade information system (ETIS) holds the details of 17 000 reported ivory and other elephant product seizures across the world.

Milliken said the increasing quantities of ivory being traded, most of them from either Kenyan or Tanzanian ports, reflected a rising demand in Asia as well as the increased sophistication of the criminal gangs who sell it.

“As most large-scale ivory seizures fail to result in any arrests, I fear the criminals are winning,” he said. — AFP

The pandemic has transformed the way we live, attend school and do our work, and our cities must change accordingly
Read more
National