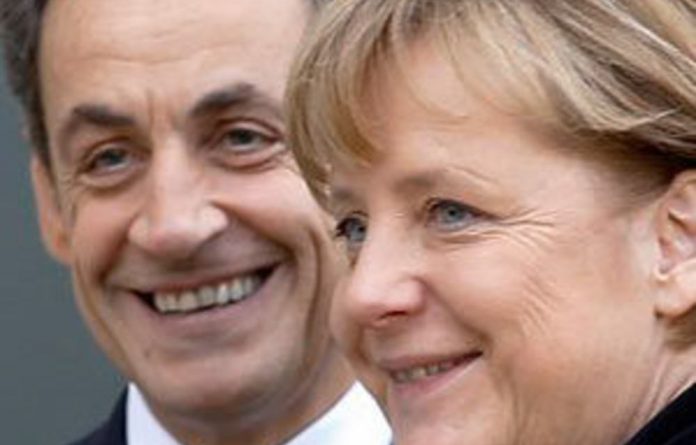 European leaders were on Monday confronted by the ugly prospect of a second recession in three years after figures showed that manufacturing output across the eurozone declined in December for a fifth consecutive month.

Italy, Greece and Spain saw the sharpest falls in production during the final month of 2011 as output and new business fell across all areas of production.

Stock markets in Paris, Frankfurt and Milan rose after the figures proved slightly better than expected in France and Germany, with the German Dax up 3% at 6 075 and Paris Cac up 2% at 3 222. The Netherlands and Austria also all saw only mild falls.

But the first economic figures of the new year were widely interpreted as a strong signal that the eurozone is heading into recession. To emphasise the lack of confidence among investors in the prospects for the eurozone, the value of the euro continued its decline against the dollar and the yen.

France’s President Nicolas Sarkozy and Germany’s Chancellor Angela Merkel prepared the ground for a difficult year in speeches at the weekend. They said 2012 would be a year of slower growth. Merkel said Europe was experiencing its “harshest test in decades”.

Manufacturing has faltered after strong growth in 2010 and the first half of 2011.

The Markit/CIPS purchasing managers’ index (PMI) survey, where a reading below 50 indicates a contraction, rose to 46.9 in December, up from 46.4 the previous month. The average PMI reading in the final quarter of 2011 was the weakest since the second quarter of 2009.

The survey said a fall in production at eurozone manufacturers reflected a seventh successive monthly decline in new orders, which in turn reflected a combination of lower demand in domestic markets and reduced international trade.

Howard Archer, chief UK and European economist at IHS Global Insight, estimates that the eurozone’s gross domestic product, a broad measure for the total economy, declined by 0.4% in the final quarter of the year. He said: “The fifth successive — contraction in manufacturing activity during December maintains concern that the weak manufacturing sector is leading the eurozone into recession.”

He added: “Eurozone manufacturers are now very much on the back foot and finding life extremely challenging as domestic demand is hit by tighter fiscal policy across the region, squeezed consumer purchasing power, and heightened eurozone sovereign debt tensions leading to tightening credit conditions and financial market turmoil.”

Exports have declined along with domestic orders after the eurozone crisis deepened last July when worries surfaced over the solvency of Italy and Spain.

Italy’s new government of technocrats, which pushed through €30-billion (£25-billion) of spending cuts and tax rises before Christmas, is under pressure to bring its budget deficit under control after a sharp rise in its cost of borrowing. Italian bond yields breached the all-important 7% barrier late last year and added to concerns that Rome will be unable to sustain its borrowing this year at affordable interest rates. Analysts said the country will need to borrow $200-billion in the first three months of the year at rates lower than 7% if it is to avoid a second crisis.

Strikes
Spain’s Cabinet is expected to meet for the first time to discuss new tax rises designed to stem a ballooning budget deficit, while in Greece pharmacists and doctors went on strike over plans to cut health spending and reduce profit margins on the sale of drugs.

Pharmacists across the country began a 48-hour strike on Monday to protest government plans to trim their profits by cutting the retail prices of drugs. They are also demanding payment of hundreds of thousands of euros owed by social insurance funds.

State hospital doctors started a four-day strike, objecting to government reforms to the state health system. The doctors were to be present at work but would be treating only emergency cases.

Greece has been surviving on international rescue loans since May 2010. It is negotiating the details of a second bailout.

France was not immune to the declines in manufacturing. Paris-based PSA Peugeot Citroën, Europe’s second-biggest carmaker after Volkswagen, posted a 29% plunge in December sales. Its domestic rival, Renault, recorded a 28% drop. “Orders were down about 55% in December, which leads us to expect a car market contraction of 17% in the first quarter,” Renault France sales chief Bernard Cambier said.

The automaker is forecasting an 8% decline in the French car market this year and a 3% gain in light commercial vehicle deliveries for a 7% fall overall. —