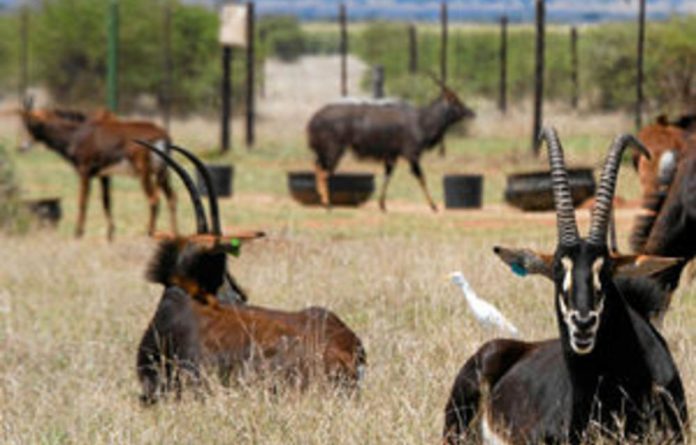 Van Rensburg has farmed Bonsmara cattle since 1975 and rare game since 2001. The breeding of exotic species has become increasingly popular in recent years and, given the impressive return on investment, it is not hard to see why. An investment of R25-million in a cattle farm in Bela-Bela would produce earnings of less than R1-million each year — a 4% return.

“It would be more profitable to just keep it in a bank account, if it weren’t for the land value,” Van Rensburg said. The same monetary investment in sable antelope could generate an income of R7.2-million a year — a 27.2% rate of return. South Africa leads the global fraternity of wildlife ranching and generates more than R7.7-billion in income each year.

Measured in terms of turnover, the wildlife industry has grown at an average rate of 20.3% a year over the past 15 years, although the recession is said to have stunted growth since 2008. South Africa has more than 10 000 commercial wildlife ranches occupying 16.8% of the country’s land. Half are located in Limpopo, a further 20% in the Northern Cape and 12% in the Eastern Cape.

Profits generated from the ranches vary, depending on rainfall and land prices, but research indicates that a typical commercial game ranch generates about R220 a hectare of economic output, compared with an average R80 a hectare for conventional livestock farming.

Unsurprisingly, rare-game breeding — of sable and roan antelope, buffalo and rhino — is rapidly growing as an investment choice and attracting savvy businesspeople such as Cyril Ramaphosa and Norman Adami, managing director of South African Breweries. Jacques Malan, president of Wildlife Ranching South Africa, said rare-game breeding was so lucrative that successful businesspeople with experience in the stock market have realised game farming could give them the dividends they want.

“The capital growth on these investments and their offspring is huge,” Malan said. “It’s always been a fantastic industry and, at this time, it is one of the best investments you can make.” It is a matter of supply and demand, Van Rensburg said, and the prices for certain rare species, such as sable, are on the rise.

Although land costs are lower, rare-game breeding requires more labour-intensive care for the livestock, including repairing fences, maintaining firebreaks and preventing the spread of parasites in smaller spaces. And that means employment opportunities.

SANParks recently reported a total revenue of R815.26-million from tourism, retail and concession. Although South African Tourism and the department of tourism did not have consolidated figures on wildlife tourism, Dry said it was estimated at more than R1-billion.

Livestock auctions showcase the value that rare game can reach. Flippie Cloete, professor at the school for environmental science and management at North-West University, said formal auctions generated as much as R200-million each year, whereas informal auctions probably accounted for double that amount.

Female species in rare breeds are generally more valuable than the males, but last year a young buffalo bull reached a record price of R18-million at a game auction. It was the highest price paid to date in South Africa for any animal and almost R9-million more than the previous South African record for a buffalo.

Impala, blesbok and springbok are the least valuable game species, with young males sometimes fetching as little as R1 000 each. Rhino prices are on the decline because it is too risky to have them on a farm. Given the enormous value of the rhino-horn trade, the animal is worth more dead than it is alive.

Malan suggested that the best solution might be to legalise rhino-horn trading. Although still cruel, rhino horns could be removed surgically to preserve the animal’s life. Higher supply into the market would push prices down and decrease the animals’ profitability for poachers.

Hunting brings in the income
But it is still hunting that generates the most income in the industry and breeding is intricately linked to it. With Van Rensburg’s sable antelope, the female breeding cows are usually left to die naturally, whereas most of the young males are sold to hunting outfitters at a cost of about R20 000 each. They are then left to mature and sold at about R64 000 each.

Peet van der Merwe, senior researcher for tourism research in economic environs and society at North-West University, told the Mail & Guardian that hunting had two pillars: trophies and biltong. Foreign hunters must go through “hunting outfitters”, such as safari companies, and purchase packages to hunt game — often the rarer species. But local hunters, who are mostly in search of biltong, are far more prevalent and often arrange hunts privately with game farmers. They usually target common game such as impala, springbok, kudu and eland.

Van Rensburg said he believed that farmers were unfairly persecuted by anti-hunting activists, especially because the practice offered real, measurable economic opportunities for South Africa. In Limpopo, South Africa’s leading hunting province, the industry directly employs 9 778 workers and the total economic impact of hunting in the province is R2.6-billion, according to 2008 findings of a tourism focus area study at North-West University.

In the Eastern Cape, research by Professor Pieter van Niekerk at the Nelson Mandela Metropolitan University found that the province’s wildlife industry generated R392-million in income in 2009 compared with the R274-million generated in 2005. Hunting, at 55.7%, remains the main income generator.

There are more game animals in South Africa now than 150 years ago. Towards the middle of the 19th century, wildlife had no economic value. “At that stage there were only 19 bontebok, 2 000 blesbok and 30 white rhinoceros left in South Africa,” Dry said. But in 1894 the government intervened and established game reserves.

Game breeding also offers invaluable perks. “It’s a lifestyle investment,” said Malan. “Some of these businessmen never see their families, but on the weekend everyone gets together. Their money can’t give them that kind of joy in a bank or in the stock market.”

Van Rensburg shared the sentiment. “You cannot do any of this without money, but farmers do it for the love of it. The ecosystem and the naturally occurring beauty is what make farming in South Africa so exceptional.”

Wildlife better at doing what comes naturally
Genetics trading and artificial insemination are so commonplace with domestic livestock that it would seem easy to use these techniques in the wildlife industry — but experts say it is not feasible. Jacques Malan, president of Wildlife Ranching South Africa, said the process traumatised the animals and that the tranquilliser used also tended to make buffalo infertile.

Gert Dry, deputy president of the organisation, also said that artificial insemination was not feasible in wildlife ranching. “The risk of losing your top breeding females through stress, given these are wild animals, is extremely high.”

Professor Kennedy Dzama, an animal geneticist at the University of Stellenbosch’s department of animal sciences, said artificial insemination required stringent protocols and was best suited for animals raised under intensive conditions and that were used to being handled by humans.

“This is not the case in wildlife, even though animals on game farms may be artificially inseminated in special cases. The success rate though would be low, which is why it is an expensive venture.” The natural process of mating was more successful and less costly in game breeding, he said.