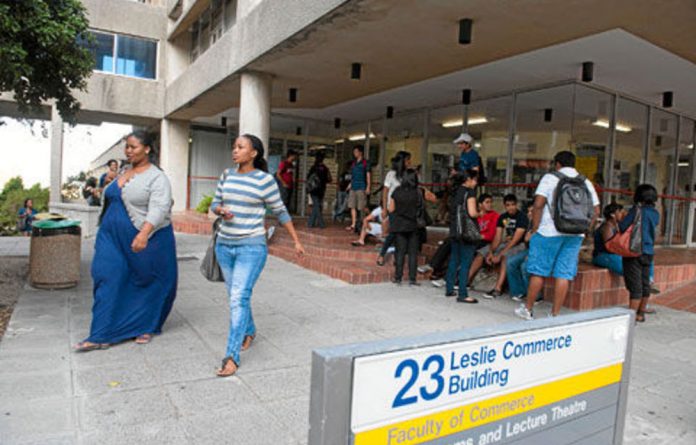 Universities’ admissions policies have been making headlines again recently, especially regarding the use of race as an indicator of economic ­disadvantage.

The University of Cape Town, in particular, has come under considerable scrutiny in the past year in the form of debates on campus, on television and in the ­columns and letters pages of national newspapers.

The university’s senate and council regularly reassess the admissions policy while actively investigating better proxies for inequality that can underpin our redress measures.

We are making progress, but so far have not been able to validate an alternative set of criteria that are more reliable than race and it is worth considering the reasons for continuing with a race-based ­admissions policy.

The debate on affirmative action in university admissions has moved ­significantly in the past few years. No doubt there are still some who argue that a meritocratic selection system should consider only the marks achieved in the national ­senior certificate school-leaving exam (matric).

But anyone familiar with the school system will know that the difference between pupils’ ­performances in a national exam has much more to do with the school they went to, their socioeconomic status and the conditions under which they live and learn than with academic ability alone.

The reason for this is not hard to fathom. For a pupil in a township school to overcome the odds and get 60% in the grade 12 exam requires a degree of motivation, commitment and raw talent that far exceeds that needed by a pupil achieving the same result at the average, historically white public or private school.

One way might be to design weights to be applied to the marks for different school systems. However, this does not take into account that even within a given school system there will be ­children with widely varying degrees of ­disadvantage that affect their school performance.
For example, one might assume that all black pupils at good ­suburban public schools are not disadvantaged any longer and should compete on an equal footing.

Yet the fact is that some of those children are deeply disadvantaged in terms of home circumstances — for example, the children of domestic workers who have never had an opportunity to be educated.

Another approach might be to have a test that measures academic potential unaffected by differential life opportunities and to select those with equal potential to succeed. Such a test has been the aspiration of those who research selection policy, not only because it may be fairer, but also because it would grow the pool of university candidates with a high success rate.

For obvious reasons, tests of this kind are difficult to create, because potential is so difficult to isolate from numerous environmental factors.

And even if such tests existed, they could not stand alone because potential is inadequate as a predictor of success at university, which will also be dependent on one’s ­mastery of certain subjects to the necessary level. Moreover, fairness would require that motivation and hard work count as well.

Another method, which recognises potential and personal effort, is to put pupils with comparable degrees of disadvantage into ­separate groups and select the top performers in each group so that they are not competing with ­pupils who are much more or much less advantaged.
The assumption here is that, in any given set of circumstances, the pupils with the most natural talent and motivation will rise to the top of their particular groups.

In the main, the ­controversy is not about ­disadvantage having a place in the selection ­process. Rather, it is about using race as a marker for disadvantage and redress.

There are two fundamental arguments against the use of race. The first is that racial categorisation undermines our national commitment to nonracialism.

It forces us, and especially youngsters born at the time of the first democratic elections, to view the world, themselves and others in terms of racial categories.

The second argument against race as a basis for affirmative action is that it may include black students who are certainly not disadvantaged, may come from wealthier homes than most whites and may have had the benefits of 12 years of private-school education.

This then unfairly disadvantages a hard-working, and perhaps less well-off, white student in favour of a black student who has achieved lower marks, solely because the ­latter is black.

These are the reasons we ought to move away from a race-based policy. We should accept it in the interim only if there is no ­better solution and only if the advantages outweigh the disadvantages. Unfortunately, the University of Cape Town’s experience is that this is still the case.

Experts worldwide recognise that these educational determinants take at least a generation to improve after the obvious economic measures of disadvantage and inequality have been addressed.

Theory and reality
In the South African setting the assumption underlying the demand that the selection of applicants from privileged private schools should be race-blind is that there is no longer any educational disadvantage for black pupils in private schools.

The reality is different. If one looks at the distributions of matric marks by race at our university’s top 30 feeder schools nationally — almost all private or former model C — one finds that although the distributions overlap in that there are a few black students who perform in the top ­percentile and some white ­students in the bottom percentiles, they are generally distinct, with black students performing an average of seven percentage points lower than white students.

So the question we have to confront is this: Why is there a difference in the performance by race even in students from the same privileged schools and middle-class ­socioeconomic status?

In the second and concluding part of this article next week I will start by considering the three distinct types of explanations prominent in the international literature that have considered this question.

Dr Max Price is vice-chancellor of the University of Cape Town. Part two of this article will be published next week