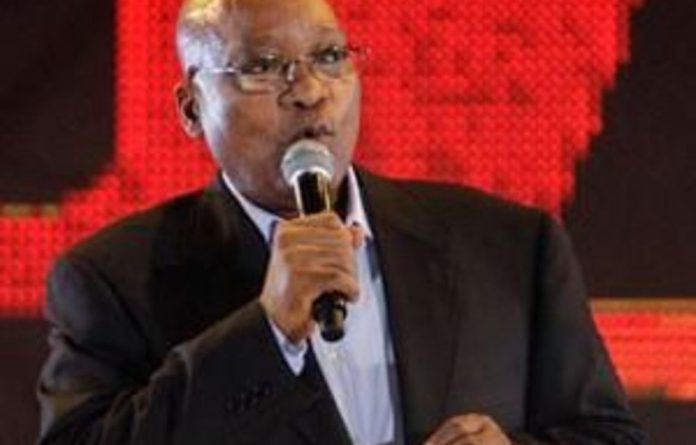 The ANC centenary celebrations formally commenced on Saturday with a traditional cleansing ceremony in Waaihoek.

Taking place on the grounds where the church in which the ruling party was founded in 1912 lies, several animals were ceremonially slaughtered.

Traditional and religious leaders opened the cleansing ceremony outside the church on Friday evening with an inter-faith service that turned into an overnight vigil running until the sacrificial ceremony took place.

The animals’ blood was spilled inside a kraal to the beat of drums and ululation.

Renowned poet and ANC member Walley Serote told reporters the sacrifice is part of “remembering African traditions” in the hopes of invoking the spirits of the ancestors to offer guidance.

“We spill the blood of these animals in the hopes that our ancestors will help us prevent spilling human blood in the future,” he said.

President Jacob Zuma brought the cleansing ceremony to a close by sacrificing a black bull. He carried out the symbolic slaughter with a spear presented to him by a former Umkhonto we Sizwe member.

Only a select few were privy to Zuma ending the cleansing ceremony as police kept the media and the majority of those attending away.

The stabbing was left to the “young” who could perform it practically, said Zuma.

“Some of the important remarks I made before the ritual was [about] the importance of the spear. The spear was one of the powerful weapons we used in the wars of resistance,” Zuma said.

“This is very symbolic because of the struggle. The apartheid government responded with violence, with burning people and arresting people and finally banning organisations, especially the ANC and PAC.”

Zuma then recounted how former ANC leader Albert Luthuli along with the national executive committee at the time created the ANC’s military wing, Umkhonto we Sizwe (Spear of the Nation) in order to defend itself.

“Luthuli said that as an African man, if you are faced with a powerful enemy … you retreat to [your] own home where there is a spear, which is your last weapon. And once he follows you to your home, you are left with no alternative but to pick up your spear and stab him.

“We have spoken to the ancestors, it is done. The spear once used to fight apartheid is now used to protect our nation. Let us go out and enjoy the centenary celebrations,” Zuma told the crowd afterwards.

The Mangaung Outdoor Sports Complex will play host to a series of inter-cultural performances from 10am onwards.

At Maphikela Square in the Batho township there will be poetry readings by Wally Serote, Baleka Mbete, Don Mattera and Willie Kgositsile.

At midday Zuma will accept an unspecified number of cattle as a gift from the AbaThembu clan in honour of the ANC’s centenary.

This will be followed by a gala dinner in the afternoon at Vista University for VIP guests. Over 40 heads of state are expected at the dinner.

The day’s activities will culminate in Zuma lighting a centenary torch to mark the party’s century of existence at midnight outside the Waaihoek Church.

Millions paid out but Bloemfontein roads give no joy