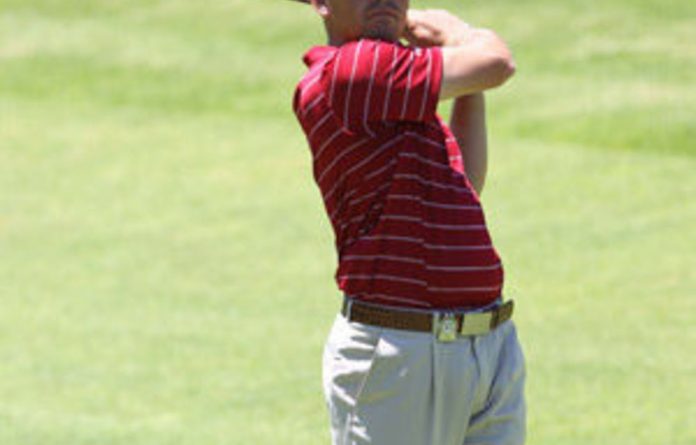 Louis Oosthuizen put himself in the perfect spot to notch a second victory in the Africa Open when he joined Tjaart van der Walt in pole position ahead of Sunday’s final round.

The defending champion led by two at the start of the day and kept his advantage with three straight birdies from the first.

Not to be outdone, Van der Walt went one better with four on the trot from the first to cut the deficit to one.

At the turn, it looked very much like Oosthuizen would be the man to continue to hold sway as an excellent outward half of 33 that included three birdies in a row from start and another at the seventh kept him ahead of the chasing pack.

But an untimely bogey at the par-five 11 against birdies from his challengers saw him drop from the lead.

In typical Oosthuizen fashion, though, the 2010 Open champion retaliated with a brace of birdies at the 15th and 16th and the final pairing reached the 18th tee, tied for the lead at 20 under.

The Mossel Bay pro sealed his second successive round at the top of the leader board when he holed a three-footer after an excellent approach while Van der Walt, who produced an equally impressive approach, also birdied the last.

‘Real contest’
Goosen, whose approach found the greenside bunker, chipped to 10-feet and holed out for par.

As the dust settled, a six-under-par 67 from Oosthuizen and excellent 65 from Van der Walt saw the leading pair at 21-under-par 198, shot clear of Goosen, who posted a 66.

“I obviously had a nice start to keep my nose in front,” said Oosthuizen.

“I let one go on the back nine and that opened the door for Tjaart and Goose, but it just meant I had to battle back.

“I made a crucial mental error not getting it past the tree into the fairway and at this course you pay the price, but I do enjoy chasing and fortunately I made a few putts coming in and I managed to sneak back.”

Oosthuizen said he expected much the same if the windless conditions to prevail on Sunday.

“There was some wind this afternoon and that made matters tricky. I hope it starts blowing tomorrow, because then it will be a real contest,” Oosthuizen said.

“If it doesn’t, the lower ranked guys will chase hard but the guys at the top will still make birdies and the score could dip to 27 under par or even lower.”

‘Not intimidated’
Meanwhile, Van der Walt relished the opportunity to challenge for his first professional win.

“I’ve been playing for a long time and I’ve competed at this level and came close a few times,” said Van der Walt.

“I’ve been in contention but then a higher ranked player threw up a stop sign. Times like that you just have to accept it.

“I’ll just concentrate on doing what I’ve been doing the last three days. I’m not intimidated by playing with two Major winners again and, besides, the ball doesn’t know who those two are.”

England’s Danny Willett held a share of the lead at 20 under, but an unfortunate drop at the last for a 65 left him two shots off the pace.

Lurking a further shot back Richard Sterne carved out a quite unbelievable 64 in only his third competitive round after an 11 month layoff.

A 67 from Jaco van Zyl and 68s from Scotsmen Craig Lee and Alastair Forsyth also left them well within striking distance at 16 under par. — Sapa