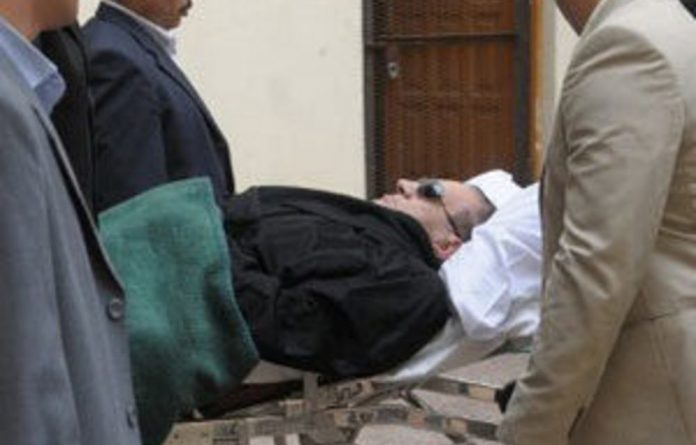 Hosni Mubarak was “a just man, not a tyrant” and his accusers have no evidence to support their charge that he ordered the killing of protesters during the uprising against him, the lawyer defending the former Egyptian president said on Tuesday.

Defence lawyer Farid el-Deeb said the prosecution had initially decided against bringing the charge against Mubarak for lack of evidence and only did so later in response to public pressure.

“There is no way that Hosni Mubarak, who is accused of murder and abusing his power, is the same Hosni Mubarak I am about to describe,” said Deeb, repeatedly raising his voice and shaking his fist in an impassioned speech to the court.

“He is a man with clean hands and a pure heart.”

As in previous sessions, the 83-year-old Mubarak was wheeled into the courtroom on a hospital trolley. The man who governed Egypt for three decades listened to the defence from a cage reserved for the defendants, alongside him are his two sons who are standing trial on charges of corruption.

Addressing the charge that Mubarak had ordered the killing of protesters, Deeb said there was no legal case against the former president. “He’ll be acquitted,” whispered members of the audience who appeared convinced by the argument.

Broadcast live in its early stages, the trial mesmerised millions of Arabs. Mubarak is the first Arab leader toppled in a wave of protests to appear in court in person.

Threat of outrage
A verdict of innocence would likely trigger outrage among many Egyptians and could lead to more protests, though Mubarak could still be found guilty of the other charges he faces, including corruption. Deeb told the court he would spend the coming days addressing those charges.

More than 850 people were killed in the 18 days of protests that unseated Mubarak last February, since then the military has ruled the country.

Presenting their case earlier this month, lawyers for the prosecution said their evidence gathering had been impeded by a lack of cooperation from the interior ministry — a charge it denied.

Deeb cited witness testimony from Omar Suleiman, Mubarak’s deputy in the last days of his rule, that there had been no orders to shoot. Testimony from Suleiman and other senior officials was given in closed session.

Orders were “to deal with the protests in the usual manner” by containing them with riot police and the use of batons, Deeb cited Suleiman as saying in previously unreleased statements.

The head of the prosecution had argued that even if Mubarak did not directly order the killing of the protesters, he had failed in his constitutional duty to protect the people.

The judge has given the prosecution and defence until February 16 to make their case.

Under pressure
The prosecution opened their case on January 3 with an attack on Mubarak’s political record, saying he had succumbed to family pressure to arrange a transfer of power to his youngest son, Gamal.

“What relevance of this to the case?” said Deeb, pressing the microphone to his mouth as his voice boomed around the court. “The purpose is to give the media more food for defamation and harming the defendant without any due cause.”

Deeb said Mubarak had served his country for 60 years, repeatedly citing the Qur’an, Islam’s holy book, during the three-hour presentation to the court.

He presented Mubarak’s record of military service as an air force officer and attributed any failings during his presidency to the burden imposed by Egypt’s rapid population growth, saying it had doubled to 82-million in the years he was head of state.

It was under Mubarak’s rule, he added, that Egypt recovered the entire Sinai Peninsula from Israel, territory returned under the 1979 peace treaty agreed by former President Anwar Sadat.

“All this man asks from you is justice and being fair to him. We cannot cover his history with dust,” Deeb said. — Reuters