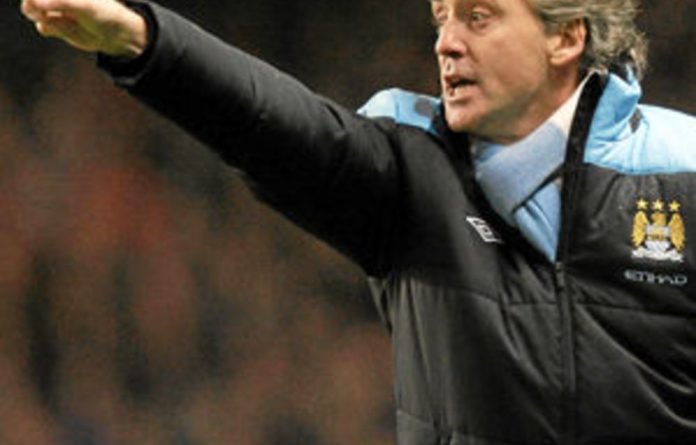 Roberto Mancini is running the risk of the Football Association (FA) intervening if he continues with his habit of waving imaginary cards for opponents to be booked or sent off.

The Manchester City manager has done it twice in the past four matches despite apologising after the first occasion and, in between, accusing Wayne Rooney of doing the same when Vincent Kompany was sent off in the FA Cup third-round tie against Manchester United.

The association is concerned that Mancini, previously a manager who rarely criticised the standard of officiating in England, is undermining the Respect campaign and should know better than to act this way when referees would generally issue a yellow card to a player doing likewise.

For now, the association does not intend to contact Mancini, but the issue has been discussed behind the scenes and, if it happens again, they plan to bring it up with him and point out that he is acting in an unsporting manner, regardless of whatever problems he may have with refereeing.

Mancini’s latest grievance came in the last few minutes of City’s 1-0 victory over Wigan Athletic on Monday, when he demanded the dismissal of Maynor Figueroa for a handball that had denied Sergio Aguero a clear run at goal.

Roberto Martinez, Wigan’s manager, later described it as “not acceptable” behaviour and Mick McCarthy, the Wolverhampton Wanderers manager, joined in the criticism. “It is a little blip on a really good career for him at City because he handles himself with such good dignity and grace,” McCarthy said.

“I don’t think anyone should do it. It is wrong, it looks bad and I’m sure if it is pointed out, Roberto won’t do it again.

“I had it in a match with Queens Park Rangers a while back and took real offence to it. Bruno Oliveira [the assistant manager] did it and we didn’t see eye to eye on that. Paulo Sousa was in charge and he was really apologetic and explained that that is their culture. But I said: ‘You are in our league and our culture, don’t do it and we will get on.'”

Mancini apologised after an identical act when Martin Skrtel gave away a penalty during City’s 3-0 league defeat of Liverpool earlier this month. He then criticised Rooney for urging Chris Foy to dismiss Kompany for his tackle on Nani. He was involved in an angry exchange with Steven Gerrard after questioning why Glen Johnson had not been sent off in Liverpool’s Carling Cup semifinal win at the Etihad Stadium. —