Thabo or Taboo? Mbeki’s inner circle on his future role 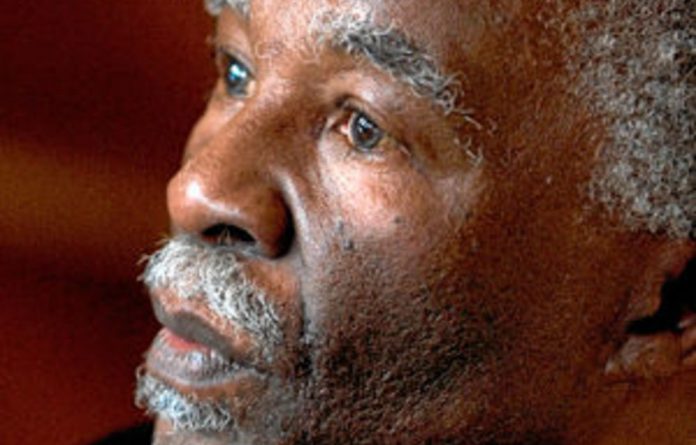 Former president Thabo Mbeki was yanked from power three years ago in the most ignominious, albeit bloodless, “palace coup” led by militants in the ANC national executive committee, then aligned to President Jacob Zuma.

But the tide has since turned against Zuma and many of Mbeki’s former enemies in the ANC are now calling for his return to the domestic political scene.

During his appearance at the ANC’s 100th anniversary celebrations a fortnight ago, Mbeki received the loudest cheers from scores of ANC supporters when he handed the centenary flame to Zuma at a packed Free State Stadium in Mangaung, Bloemfontein.

Malema later said in a radio interview that Mbeki’s decision not to comment on domestic politics was “depriving us of that intellectual wealth.

“I wish he could reconsider his decision not to participate.”

Mbeki, who has been a member of the ANC since the age of 14, is now involved in the reconstruction and development of South Sudan through the African Union and is also responsible for monitoring the implementation of the Comprehensive Peace Agreement in the region.

This week the Mail & Guardian canvassed the views of several ANC leaders, including members of Mbeki’s inner circle, about his future in local and international politics.

Essop Pahad: Former minister in the presidency and editor of The Thinker
“His major preoccupation at the moment is South Sudan. He is deeply involved in monitoring the implementation of the Comprehensive Peace Agreement and that is keeping him extremely busy.

“It takes up all his time. The peace agreement is still fragile at the moment, as was evident with tensions that broke out in South Sudan this week. There are many issues that need to be resolved over there, such as distribution of financial resources from oil, border disputes and the movement of people. That is his primary preoccupation.

His passion and commitment to African unity and to progress is as strong as ever. The ANC national executive committee, if it so wishes, can invite him to assist in a particular matter.”

Gwede Mantashe: ANC secretary general
“Let me, from the outset, put it on record that all former presidents of the ANC are ex-officio members of the ANC national executive committee and its substructures. This allows them to play a continuing role in the organisation, depending on their availability and health. As a norm, the ANC consults with its former presidents from time to time on the variety of issues that will assist and enrich the organisation. Thabo Mbeki remains a loyal member of the ANC; he is one of the veterans that have led the ANC and his role will continue to be that of advising on political issues within the organisation through the relevant structures that have been created by the organisation. He continues to be a resource, a leader in the ANC and a valued veteran.

“Political education in the ANC happens at various levels, starting from the branch to the political education sessions that are run by the national office through the sessions that have been organised. All leaders of the ANC have a role to play in imparting knowledge and presentation of the history of the ANC that is aimed at preserving the traditions, practices and conduct by all members of the ANC. In this regard Comrade Mbeki has a role to play. No member of the ANC is restricted from participating in party structures and activities like these. It therefore means that Comrade Mbeki has no limitation in terms of the role he can play as an ANC member.

“He is still involved with the international community, partly using the platform of the Thabo Mbeki Leadership Institute and, as well, the role he continues to play in Sudan and other places. So he is not constrained to pursue the vision of the ANC at an international level.”

Saki Macozoma: Businessperson and former ally of Thabo Mbeki
“I think that the ANC Youth League suggestion to this effect [that Mbeki return] is mischievous, given the succession context and the factionalism. There are many ways in which Mbeki can serve the country. His expertise in macro­economics and in diplomacy can be used better by the state, and not the party, to the benefit of the people of South Africa. It is unproductive to exclude him in areas where he can contribute in a non-partisan and non-factionalist way. That he returns to active politics is not in his or the country’s interest.”

While I wouldn’t define a specific role that he could play, I’m sure the committee will find a specific task for him, depending on the agenda and the time he has.”

Andile Nkuhlu: Former ANC Youth League leader
“I believe former president Mbeki should continue to maintain the posture he has taken since Polokwane to allow the incumbent leadership the space to lead the organisation and society at large. He would naturally wish and hope that, whatever happens and whatever the challenges may be, the integrity of the ANC at all times must be preserved.

“I’m of the view that he will effectively use his allocated November month, dedicated to his legacy as president of the ANC as part of the centenary celebrations, to share his perspective on the continuing role of the ANC in the next century to confront the challenges of poverty eradication, social inequity and underdevelopment, both here in South Africa and on the African continent.

“From time to time, when petitioned to comment on important domestic issues as a respected and revered leader of our people whose opinion and views are well respected, he will be able to make the necessary commentary. But I don’t think nor believe it would be strategic for him to be drawn into the hurly-burly of domestic politics. In my view he should remain the statesman who is focused on galvanising support for Africa’s renewal, the investment and development of the youth for leadership roles, democratising the continent for its growth and playing a significant role in world affairs in the 21st century.”